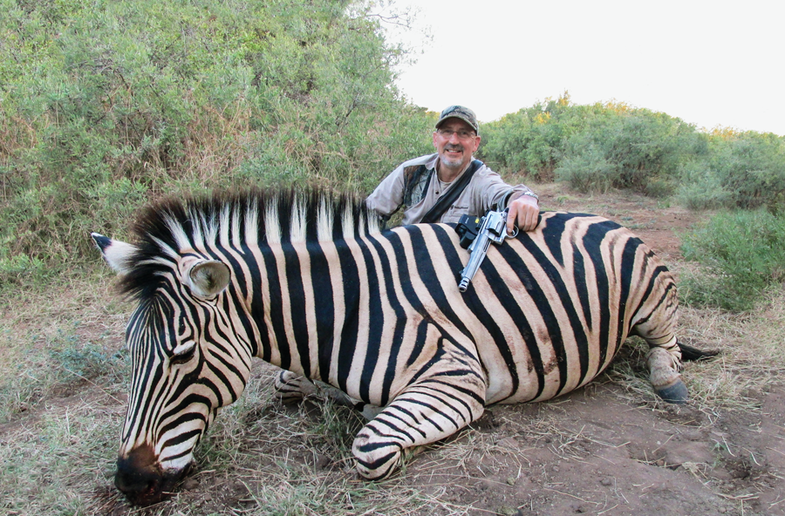 I never got to hunt Old Africa. That point was made clear on my first safari in 2004, which took place in the Limpopo province of South Africa. My hunting partner and I had split up; he went with our guide and I took off into the bush with our tracker.

The tracker and I didn’t share a spoken language and had to rely on hand signals and other gestures as we stalked through the scrub in search of plains game. But it didn’t matter. We were both members of the hunting fraternity and understood each other well enough.

As we moved slowly through the brush I stayed close on his heels, my senses hyper alert for any hint of an animal. There was no way to know whether we would bump into a kudu, an impala, or a group of rhinos. The experience was pure magic. It was Africa.

The tracker stopped and I froze in place. I looked ahead, scanning the trees, but saw nothing. Then I noticed his right hand slowly drift backward. I stared at it, trying to interpret the signal. The hand kept moving back as he reached into his pants pocket.

He pulled out his cell phone and answered the call with, “Hoe gaan dit? ”

So it is accurate to say my hunts in Africa all occurred during the modern era. But even in the last decade, the hunting scene has continued to evolve significantly. Last spring I made my fourth trip to Limpopo. I was drawn there for two reasons: One was to see a bold new conservation project in action, and the other was to take on African game with a handgun.

The Limpopo River forms the border between South Africa and Zimbabwe. The area is lush by the standards of southern Africa. Mopane and acacia grow in dense thickets with patches of grass, brushy river bottoms, and rock kopjes also prominent in the landscape.

The region holds a lot of game that is mostly contained behind the high fences that surround the large ranches found there. While the fences certainly help keep the animals from roaming, they also function to keep people out—poachers and bandits in particular.

Zimbabwe was in full meltdown during my first trip, and the ranch owners and workers never let their guard down. Stories of ranch invasions by desperate border crossers were common, and neither the landowners nor the invaders showed any mercy during those bloody encounters. Even stealing something as basic as firewood from the land could get a trespasser shot. Many ranchers feared leniency would be interpreted as weakness, and an invitation for deadly incursion.

The turmoil of that time has subsided, giving way to more minor offenses. The rolls of razor wire that formed a no-man’s land on the South African side of the river have fallen into disrepair. Elephants have trampled sections of the fence, making it easy for cigarette smugglers coming from Zimbabwe to cross Limpopo.

Still, the relative political stability is allowing ranch owners like Hannes Nel to reassess how game is managed. High-fence operations are expensive to maintain and retain a stigma among some hunters who don’t want to shoot animals in an enclosure, no matter how big the enclosure might be.

Nel, who has lived in Limpopo for 34 years, reached out to some of his neighbors to form a conservancy where they would take down the high fences to allow the animals to seek out the best habitat for their seasonal needs. Hunters have access to the combined acreage, and get to pursue animals under fair-chase conditions.

“The conservancy is not just about the wildlife, but about the flora, the habitat, and the cultural heritage of the area,” Nel says. “While one of the goals is to create a sustainable population of animals, we also have a mission to look after some of the archaeological sites here.”

The Maroi Conservancy was founded in 2009 and included six properties that adjoin with Nel’s ranch. Since then, the conservancy has added other landowners to the mix and expanded to include about 23,000 total acres.

“The first couple of years were just cleaning up the land. Taking down the fences. Removing snares and conducting anti-poaching operations, and growing the number of animals,” Nel says.

The conservancy is still a young operation, and my hunting partners and I had to work hard for our animals. The task was made more challenging by our choice of gear. We left our rifles at home and instead spent the week toting revolvers topped with red-dot sights.

Getting good accuracy from a handgun is much trickier than from a rifle. As with a bow, a handgun’s point of impact can shift radically depending on how it is gripped. Handguns are also extraordinarily sensitive to follow-through. If the shooter doesn’t maintain focus on the gun’s sights and keep even pressure on the trigger until the recoil subsides, hits beyond spitting distance become a dicey proposition. But with some practice to develop consistent technique, taking game out to 100 yards or more is not difficult.

When it came to knocking animals down, our choice of caliber wasn’t any form of compromise. We all had X-Frame revolvers from Smith & Wesson, which were chambered in .500 S&W or .460 S&W. I used the .500, but either caliber packs enough of a wallop to kill any animal on earth.

Topping a hunting revolver with a red-dot sight makes for a nice pairing, but on the X-Frame guns the paramount consideration is reliability. The recoil on these beasts will shake a sub-par optic to pieces, breaking reticles, popping lens elements loose, and generally causing havoc.

While no one can accuse the Eotech red dots of being svelte, they are tough. Eotech’s background in the military and police markets means their sights are built to withstand the rigors of combat and heavy-recoiling firearms. They had no problem handling the kick of the .500s and .460s.

To wield a handgun effectively, a hunter needs two other pieces of gear. One is a shooting stick for steady aim. While not typically used by hunters in the U.S., shooting sticks are common in Africa, since sitting and prone shots don’t present themselves very often.

To use sticks properly with a handgun, the shooter should support the chin of the frame (and not the barrel), which is located just in front of the trigger guard, in the V of the sticks.

The other piece of mandatory gear is hearing protection. The muzzle brakes on the X-Frames do a great job of reducing recoil, but they throw off a shockwave that will take your breath away—as well as your hearing—if you are not wearing earplugs.

Every morning Chris Van Staden, my 34-year-old professional hunter, Samuel, our tracker, and I would load up the hunting truck and take off for a different section of the conservancy. We would drive until we noticed some fresh tracks in the road or saw an animal off in the distance, and then hop out and walk.

Samuel would pick out the spoor and we would twist our way through the vegetation, hoping to catch up to whatever animal we were stalking and take it unawares.

We frequently climbed the kopjes to get a better view of the landscape, though coming across a twisted pile of shed mamba snakeskin as thick as my forearm diminished my enthusiasm for scrambling up the rocky outcroppings.

At one point, I shot a large rock rabbit—a rodent that looks like an oversize marmot—for Samuel to take back to his village for lunch. The 40-yard shot let me know my zero was intact.

To Chris’ annoyance, the animals were staying well out of sight and we didn’t have any shots on game for the first three days. Then, during a midmorning stalk on a kudu we had spotted, we came across a herd of impala bedded among some rocks. With the wind in our favor, we moved in close. The herd started to walk off, and I spotted a good ram quartering away at 90 yards. A single shot from the .500 dropped him and our dry spell ended.

Little did we realize that once we loaded the impala into the truck, the drought would start right up again.

We hunted and walked every day. We chased eland through dry creekbeds; followed kudu bulls across woods of mopane, rooibos, and shepherd’s trees; and played hide-and-seek with waterbuck in the thick undergrowth along small streams.

Coming home one night, we caught a large snake crossing the road. Samuel bopped it on the head with a stick and I threw it in the back of the truck. When I brought it into camp, the other guides were not happy. “That’s a spitting cobra, you know,” one of them said as the snake began twisting in my hands. I took it back outside and let it go.

No harm, no foul.

Other hunters in my party fared somewhat better. By the end of the week they had taken impala, waterbuck, kudu, zebras, and warthogs. The revolvers were getting the job done.

The camp was a posh affair. It was hard to feel down coming back to camp empty-handed knowing that air-conditioned tents with good beds and hot showers were waiting. Nel’s staff took good care of us, preparing meals with local game and produce from the farm, while the hunters enjoyed sundowners around the fire pit.

Each morning I was hopeful for a reversal of our fortunes, ready to settle the red dot of my sight on an animal while thumbing back the Smith’s trigger. I would like to report that a kudu bull stepped into the open at the last hour of the hunt, but it just wasn’t so. He and his other horned kin remained hidden.

“That’s bad luck,” Chris said, frustrated by our lack of success as we drove back to camp the last night. But I didn’t see it that way. It didn’t feel like bad luck at all. It felt like hunting.