The Hunger Game: Hunting Late-Season Whitetails in the Midwest

Photo by Lance Krueger Last winter’s record-breaking “polar vortex” made headlines across the country, and the extreme cold certainly took... 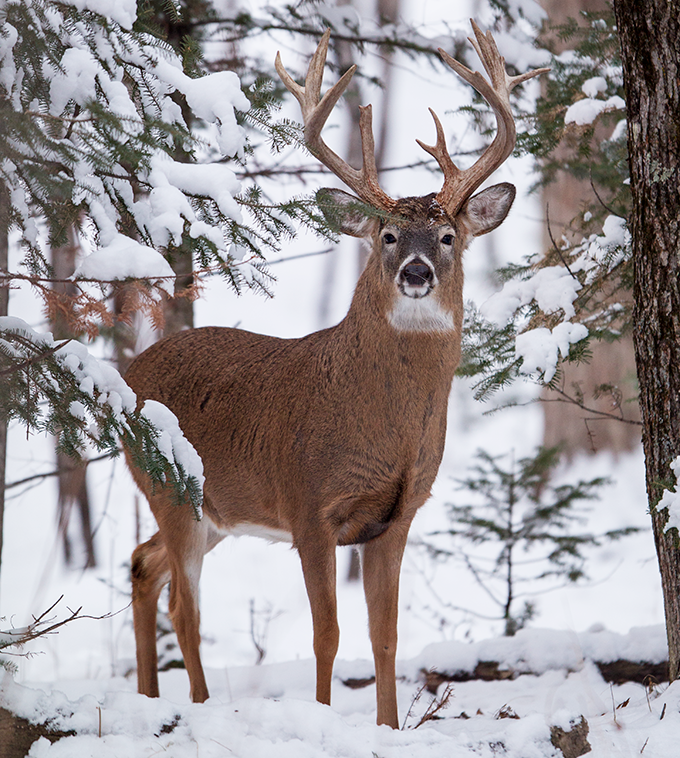 Last winter’s record-breaking “polar vortex” made headlines across the country, and the extreme cold certainly took a toll on deer numbers in the Upper Midwest and the Dakotas. Although the long bout of cold weather resulted in die-offs in some areas, the wet and mild—and EHD-free—spring and summer of 2014 provided deer with good forage, a great mast crop, and abundant browse heading into the fall. This helped set up excellent conditions for late-­season tag holders hoping to score a good buck, which are certain to be pounding food sources in an attempt to recuperate from the rigors of the rut.

“We had a late spring frost that may have negatively impacted some food sources, but rainfall this summer was adequate for a change,” says Tom Micetich, deer project manager for the Illinois Department of Natural Resources. According to Micetich, soft mast looks to be average, and although hard mast figures typically vary by species, white oak production was high. Overall, the outlook for the early winter hunting season looks good, and soft- and hard-mast crops are likely to play a vital role once the first snow falls.

Farther north, Wisconsin and Minnesota whitetails are headed into the late season in good condition. Watch for cold fronts and snow to bring deer out into crop fields to search for waste grain as late fall turns into winter, says Dr. Gino D’Angelo, deer project leader for the Minnesota DNR Farmland Wildlife Populations & Research Group. According to him, adequate rains and good crop yields this year will also reduce pressure on browse, which deer rely on in years when agricultural yields are down. Minnesota deer and moose project leader and wildlife scientist Dr. Glenn DelGiudice says that deer even farther north in in his state, in the forest zone, rely heavily on browse, utilizing 36 different species to meet their nutritional needs in winter. He says primary December browse includes mountain maple and beaked hazel, which make up a sizable portion of the whitetail’s winter diet. Dogwoods and red maples are also important. As deeper snow arrives, look for deer to move into coniferous forests where the tree canopy catches up to 45 percent of the snowfall, DelGiudice says.

In North Dakota, which is the state with the least amount of tree cover in the nation, late-season deer will head for river bottoms in search of willows and cottonwoods, according to Bill Jensen, big-game biologist with the North Dakota Fish and Game Department. The state was hit especially hard last winter, but the ample summer rain should provide the region with adequate browse and high agricultural yields. Waste grain remains a critical food source.

“Food plots and plantings of ground cover [turnips, radishes, brassicas] for erosion control and cattle feed are also attracting deer,” says Kit Hams, big-game program manager at the Nebraska Game and Parks Commission. “These plantings in row crops for cattle are fairly new to Nebraska and can pull deer from areas where hunters traditionally found deer in the winter.

“Thermal cover, protection from wind, and escape cover are in high demand in the cold,” he says.

Best hunt Time: Just before an approaching front and when the snow is blowing.

Game Plan: “Sooner or later bucks will come to food sources during the day,” says Lindberg. “You’ve got to tough it out.” Lindberg advises clients to spend as much time as possible on stand. On his own, Lindberg still-hunts along creek bottoms with the wind in his face, avoiding bedding areas. The key, he says, is to be prepared for the sometimes brutal weather.

Minnesota:
The Superior National Forest around Ely is home to some huge deer. When the snow flies, look for stands of mountain maple and beaked hazel along travel corridors.

Ohio:
Hike deep into the Tranquility Wildlife Area near Winchester and set up in a drainage that connects two patches of oak forest—prime winter feeding grounds.