The Hunger Game: Hunting Late-Season Whitetails in the South 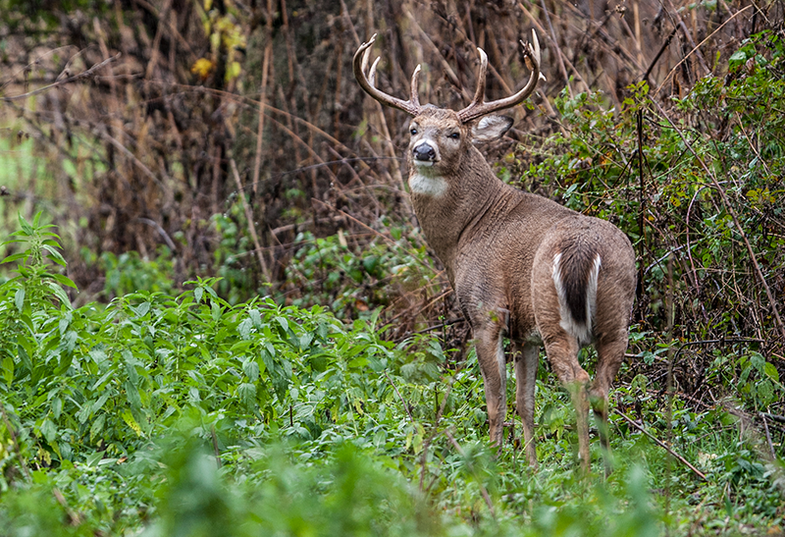 “We have had a couple of hard winters in the last few years, but none to cause concern for deer survival that I am aware of,” says Craig A. Harper, professor of wildlife management and the extension wildlife specialist in the Department of Forestry, Wildlife, and Fisheries at the University of Tennessee. Deer in the South tend to feed on the same types of foods in the same areas year after year, as long as there are no major changes to the habitat. Mast crops are vitally important in the South, but mast production varies from year to year. Deer utilize the high-fat content in acorns to rebuild after the rut, but some species tend to be favored over others when they are available. Acorns from all of the oak species in Tennessee are relatively high in fat content and deer will eat them all, but the ones with less tannin (such as white oaks) are more palatable and tend to be preferred by deer if available.

Browse, particularly soft browse, is an important winter food throughout the South, though the favored species vary greatly depending upon the location and terrain. Karl V. Miller, professor of wildlife ecology and management at Warnell School of Forestry and Natural Resources, says that great variation can occur even within one state.

“Winter food choices of whitetail deer in Georgia are highly dependent on what part of the state you are in, and the land-use patterns that you see within those regions,” Miller says. “Deer in northern Georgia, for example, rely heavily on mast, and when the acorns are gone, they feed on evergreen shrubs and vines such as rhododendron and greenbrier. In the Piedmont, winter evergreens like Chinese and Japanese honeysuckle are primary food sources, and acorns are used less. Along the lower coastal plain, gallberries and greenbriers are critical winter foods.”

“Hard mast [acorns, pecans] is the main food source until that runs out,” he says. “Blackberry and dewberry are pretty cold-tolerant native forbs. Other woody evergreen-type plants like horse sugar, honeysuckle, privet, cherry laurel, yaupon, cross-vine, and saltbush are all targeted by deer and should be part of your late-season hunting plan.”

“We do see higher use of native foods in warmer years because native plants stay green longer,” Kane says. “That means less use of food plots during the winter.”

How to Fill Your Tag

Alabama
The Barbour County State Wildlife Management Area near Midway is located in the heart of Alabama’s Black Belt region. The area offers more than 6,000 acres of public hunting.

Arkansas
Hunting for late-season whitetails is good in the Buffalo National River WMA south of Harrison, which is surrounded by hills and forests that offer protection from the elements and ample food in the form of mast crops and herbaceous plants.