Lucky Charms: Our Favorite Odds-Tippers and the Stories Behind Them

Hunting is ultimately a game of chance. What are the odds you’ll cross paths with a buck? What’s the probability... 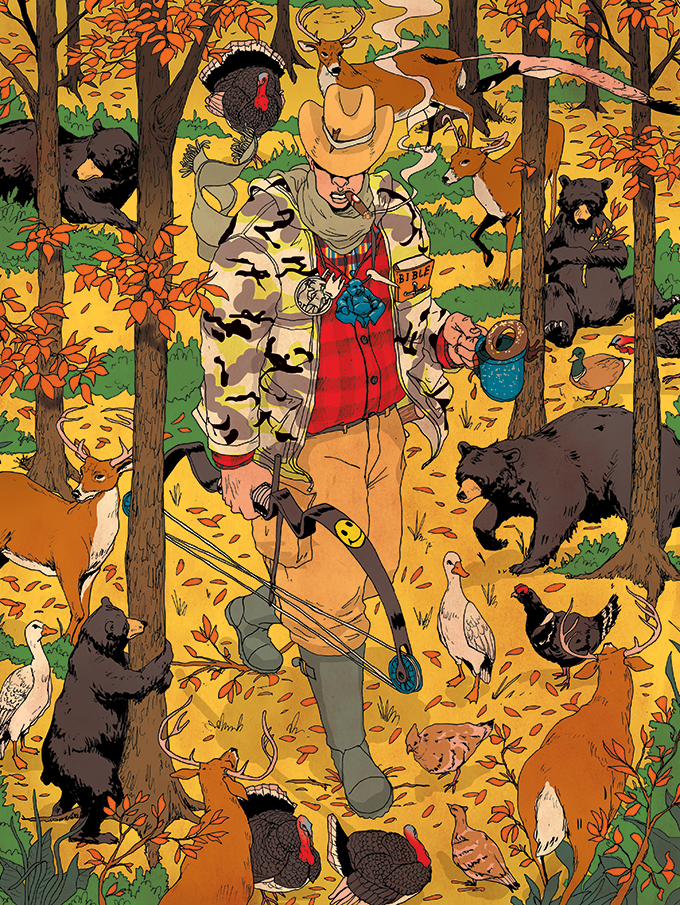 Hunting is ultimately a game of chance. What are the odds you’ll cross paths with a buck? What’s the probability ducks will be on the marsh? As with any speculative venture, we try to influence the outcome with preparation, routine, and a dose of magic. For some of us, maybe that’s a rabbit’s foot; for others, a special knife. Archaeologists have found bright beads and smooth stones with the excavated remains of ancient hunters. As long as we’ve hunted, it seems, we’ve relied on charms to bring us luck—and meat. Here are some of our favorite odds-tippers and the stories behind them.

I know Remington Bullet knives are supposed to be collectibles, but to me a collectible knife makes as much sense as a collectible crescent wrench or chain saw. When my friend gave me this blade in 2000, I saw it as a tool just like my beat-up shotguns and rifles or my F-150 with 307,000 miles on it. Plus, the lock-blade knife was so perfect.

I have two charms. One is a small antler point strung on a piece of orange fly line, the same line on which I caught my largest trout back in high school.

My other lucky charm is a small, cheapo emblem, a tiny pot-metal-and-green-glass Buddha, and in the right light, you can barely read…

For quite a few seasons, the innermost pocket of my hunting pack has held a scrap of paper designed by my then-6-year-old daughter. It features a crude rendering of a grinning bull elk and the inscription, “Good Luck, Daddy!”

Long in the Tooth
By Scott Grange

In 1971, at the ripe old age of 17, I ventured into the roadless area of Utah’s Uinta Mountains on my first elk hunt. I knew nothing about this vast wilderness other than it contained more elk than just about anywhere else in the state. That’s all I needed to know to set my young, well-conditioned legs in motion on an all-day venture that would cover nearly 20 miles and produce my first big-game animal, a nice 5-point bull.

The Hippie Bracelet
By Rob Lancellotti

I had sat on stand in northern Saskatchewan for five long, windy days and had seen a few bucks, but none that were close to the size of the heads on the wall back at the lodge.

Everyone in our group had tagged out by midweek and was enjoying late breakfasts, the fire at the lodge, and venison tenderloin lunches. All except me and my friend Dean.

I think it’s planning and persistence, not lucky charms, that get the job done. But I do have a little memento that I take hunting with me. It’s a smiley-face sticker my daughter put on my bow several years ago…

I always deer hunt with a stag-handled knife I had made from one of the last deer my father ever shot.

My Father’s Scarf
By Rob Kompel

I have an old wool scarf that my father was issued when he began his service in the United States Marine Corps in 1942. He served in the South Pacific, so that scarf is in remarkably good shape, as he never had need of it during the war. He often carried the scarf while hunting throughout the 1950s and ‘60s. By the time I arrived on the scene, my father had largely put aside his hunting interests. He died when I was 11, and the scarf was passed on to me…

As a young boy, I often hunted squirrels with my grandfather. One day he made an amazing head shot on a bushytail that was carrying a hickory nut on a limb way out over a deep mountain basin. He gave me the spent .22 cartridge to keep as a good luck charm.

Breakfast of Champions
By Frank Devlin

My luck is dependent on dunking chocolate doughnuts in hot chocolate. I’ve never had a bad day of hunting after that combo.

Ever since I started carrying an old pocket-size orange New Testament Bible, I have taken three mature bull elk scoring 335, 323, and 367, along with three 180-plus muleys, a 168-inch whitetail, four mature nilgai, a scimitar-horned oryx, two moose, and two black bears. I haven’t taken it out of my bag since. Would you?

I have a Five Brother heavyweight, made-in-America flannel shirt from 1993 that I wear when I grouse hunt—no matter the temperature. It could be the hottest grouse hunting day in Minnesota, topping out at 80 degrees, but I just roll up the sleeves. I would rather suffer the heat than consider leaving that shirt behind.

Before departing for my first guided hunt, in British Columbia, I had a small-brim cowboy hat made at Texas Hatters in Buda, Texas. They have made hats for Willie Nelson, Jerry Jeff Walker, and former President George W. Bush, among other famous Texans. At the time, I had no idea what my hunting adventures would turn into.

When I was a kid of 15, I was stalking desert sheep in southern Arizona when I came across some hard red beans (similar in shape to a coffee bean, but red) on a bush. I picked a handful, dropped them in my pocket, and killed a ram.

I tend to accumulate lucky boxes of shells. Cartridges from the box of .257 Roberts I am currently using have killed 15 consecutive deer.

The Buck Spell
By Tony Hansen

A few years ago, I just wasn’t seeing any decent bucks. So my wife put a “spell” on me before I left to hunt…

Stuck in the band of my favorite turkey-hunting hat is a small piece of my great-granddad’s split-rail fence from the Ozarks. The fence is from the family farm in Iron County, Missouri, below Johnson Mountain. I crossed that fence many times as a small boy, and I still remember crossing it one morning in the early 1960s to take my first gobbler.

For years I wore the classic L.L. Bean red-and-black-checked Buffalo wool shirt (modeled after the Woolrich classic). Most of the original buttons have fallen off, replaced by a haphazard set of mismatched buttons sourced from various and sundry rag stores.

The Pathfinder
by Dan Crockett

The knife that I’ve carried for 30 falls helps me remember every hunt. My father gave me a Buck Pathfinder on my 19th birthday. At that point, I was on a hard and wild road.

Up in Smoke
By Harry Campbell

While I do not believe in lucky charms, I have found that when hunting waterfowl on a slow day, lighting a good cigar will almost always bring in some ducks. In my experience, the more expensive the cigar, the larger the flock.