SHOT Show 2015: Best New Guns and Gear From Range Day and Day One

Benchmade Jungle Knives One of the biggest trends I’ve noticed at this year’s SHOT Show is an emphasis on tactical... 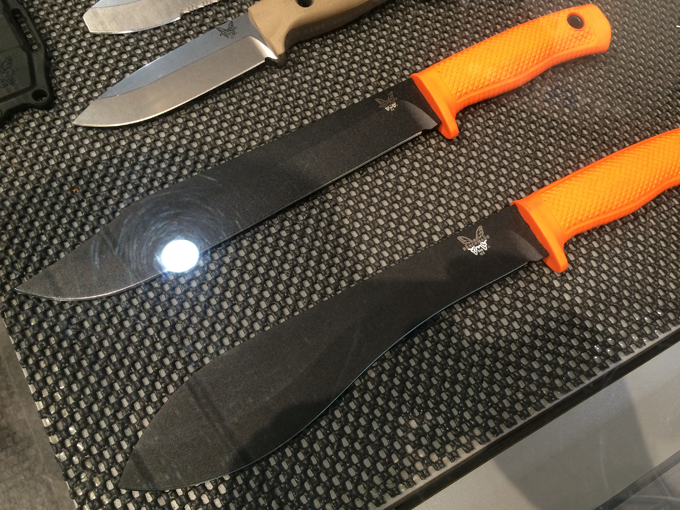 One of the biggest trends I’ve noticed at this year’s SHOT Show is an emphasis on tactical letter openers… Okay, not really. But really, though, while the emphasis of this show is deservedly on new guns and ammunition, it’s always a pleasure to score a sneak peek at the year’s the new knives. Two that caught my eye—because, how could they not with their bright orange handles and ginormous size—were these two large fixed-blade knives from Benchmade. You have a choice of two styles: clip point (top) or bolo. Both are big, very cool, and sharp enough to hack through just about anything. Including, I assume, envelopes. –Colin Kearns

Benelli’s new 828U was one of the hottest guns at the 2015 SHOT Show media day. The gun has an eye-catching design, but the heart of it is a patented steel locking system and plate that the company says will make the gun ultra-durable. The 828U comes with either 26- or 28-inch barrels, features a AA grade satin walnut stock, and weighs in at about 6.6 pounds. (MSRP: $2,499; benelliusa.com/828u-shotgun)

Camp Chef’s great new line of Pellet Grills make grilling, smoking, or baking wild game almost impossible to screw up. Just ask Phil Bourjaily. This year, they’ve added an extra-large grill to the line with the Lux model, which, with a 34-inch-wide grill surface is a foot bigger than the DLX model. If a 2015 resolution of yours is to host a massive wild-game feast (and if it is, then you’re awesome), consider investing in this backyard black stallion. —C.K.

In one of the biggest innovations we’ve seen here at the SHOT Show, Savage has solved the problem of cycling .17 HMR ammo through an autoloader. Savage made several changes to their standard autoloader design to make the A17 more reliable, but the biggest addition on the rifle is a special lug that locks the bolt in place for a millisecond, delaying blowback to allow most of the gases from burning powder to dissipate. The slight delay allows the bolt to cycle reliably. The steel receiver and chromed components create a surface to further enhance cycling. The A17 comes with a 10-round rotary magazine and adjustable Accutrigger. It features a button-rifled barrel, and the one I tested shot smoothly and accurately.

Savage has also worked with CCI to develop A17 ammunition that shoots 100 fps faster than standard 17 HMR cartridges. At 2,650 fps it will help ensure cycling in the rifle under cold conditions and when the gun has seen heavy use and is fouled.

Yeti’s Hopper cooler is about as close to bombproof as a soft-side cooler can get. The Hydrolok zipper is waterproof and airtight—which one of the guys at Yeti proved to me by stepping on top of and jumping on the cooler without it deflating in the slightest. Like any Yeti cooler, the Hopper—newly available in two new sizes, the 20 and 30—will keep your game, fish, bait, or beer cold for days. Unlike other Yeti coolers, the Hopper is convenient and easy to carry—perfect for a long road trip, or just a long day on the water. Another cool product from Yeti is the Colster—the newest member of the company’s Rambler family. Simply unscrew the gasket, insert the can or bottle of your beverage of choice, secure the gasket back on, and voila—your beverage of choice will stay cold for hours. Check out the video here. —C.K.

The UTAS 15 is a bullpup pump gun with a 15 round capacity. The 12 gauge gun has two magazine tubes and a toggle that lets you select one magazine or let them feed alternately. The gun weighs about 7 pounds empty and measures just 28 inches overall with its 18.5-inch barrel. It has an AR 15-style safety and a full-length picatinny rail that lets you add iron sights or, in the case of the gun I shot at Range Day, an Eotech sight. The action is very slick, and the gun was surprisingly fun to shoot. $995 from UTAS.

Big-game hunters, if you’re in the market for a new backpack, you might want to consider this colossus from Alps. First, a few notable features: brutally strong nylon; a fleece-lined pocket for a spotting scope; a dropdown pocket for either a rifle or bow; a hydration pocket; an internal divider for your sleeping bag; and plenty of other impressive stuff. What’s most innovative about this pack, though, is how the pack attaches to the frame. You can remove the pack entirely in order to fasten and pack out an elk. Or, if you’re capable of packing out a truly monster load, you loosen the pack from the frame to create enough space to fit an elk quarter between the pack and the frame. This is a big-time pack for big-gamers. —C.K.