Keeping the peace between a sportsman and his alter ego 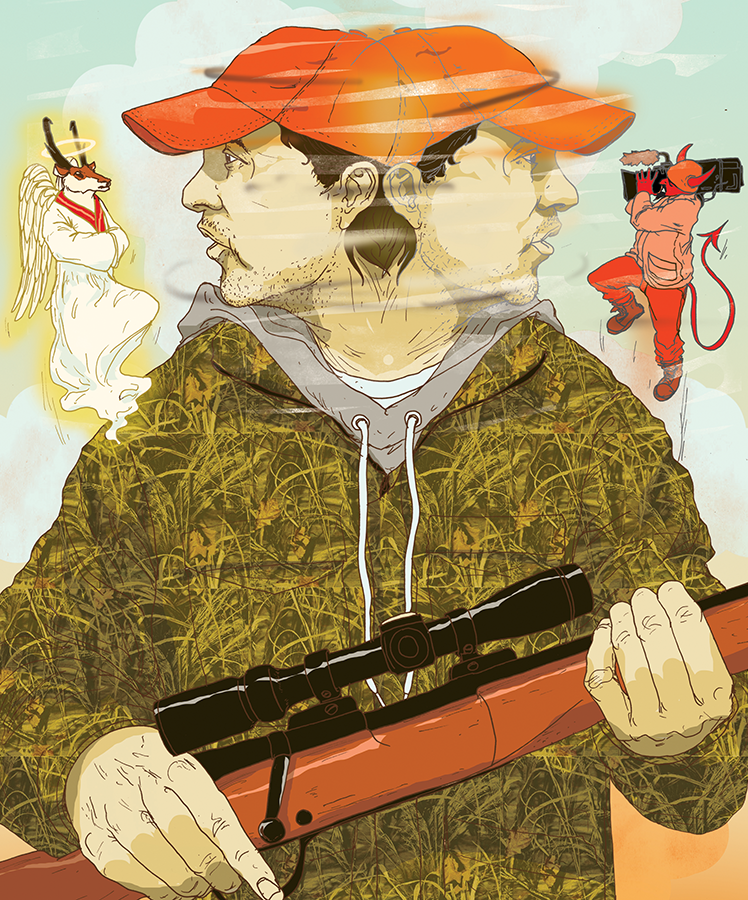 As a hunter, I have always maintained that if the right opportunity presented itself on a game animal, I wouldn’t hesitate for a second. I’d take the shot, then and there, before my quarry could slip away. But this sensible philosophy directly conflicts with my chosen line of work. As the host of an outdoors TV show, I am only allowed to shoot when the cameras are rolling.

Don’t get me wrong—I love the spotlight. Problem is, my first instincts are those of a hunter, and my television hosting obligations finish a distant second.
So one sunny South Dakota afternoon found that second, pestering voice inside me screaming, “Don’t shoot, you idiot!”

In my sights stood the biggest pronghorn buck ever to roam the South Dakota prairies. He paused, statue-still and perfectly positioned beside four girlfriends, his horns towering like skyscrapers.

It was filming season and I had one tag left. I had just inched forward through hundreds of yards of cactus and rocks to within 60 yards of the monster. I stared at him through my crosshairs, and he was none the wiser to my presence. Perfect.

Except for one problem: My cameraman lay ensnared in a jungle of sagebrush 15 yards behind me, a mouse in a glue trap. He tried to reposition himself, and five sets of curious eyes locked onto us. As the TV host scrambled for the pause button, the hunter reached for the trigger.

The buck fell dead and his ladies fled. I guess you could say I blew it. My TV folks certainly did. And keeping them happy is critical for keeping my job, so I vowed to heed my other half in the future.

Fast-forward to this year. I was fulfilling my life-long dream of hunting harlequin ducks on the Puget Sound. Washington’s limit is just one bird per season, and everything from weather conditions to my shooting abilities weighed on me. But the plan was foolproof. The decoys were bobbing, the boats were anchored, and the film crew was briefed on flight patterns.

Just after legal light, a pair of harlequins flapped toward us. We shuffled into position, and the birds flared. They must have noticed the six people, three shotguns, two cameras, and a partridge in a pear tree floating conspicuously on the water.

My nerves twitched, and the stress built. Minutes turned into hours. We couldn’t leave without footage for a new episode.

Then suddenly, out of the wild blue sky, there emerged a single mature drake. He was on a mission from God, flying lightning fast and unfazed by the decoys.
The mediator inside me struggled to wait for the cameras, but the battle was already lost. I seized my shotgun and fired. My dream duck dropped out of the sky. It had all unfolded in seconds—and the cameras only captured the tail end of the action.

So, you might wonder, what have I learned over the years? Nothing, if you ask the TV execs. But I’ve discovered a little something. Considering I’ve taken my love of the outdoors and burdened it with the stressors of a career, I’m still first and foremost a hunter. And I’m okay with that—because I won’t be on television forever.