Wild turkeys are notoriously exacting about their choice of bedrooms. But once you discover their roost preferences, that intelligence will pay off spring after spring 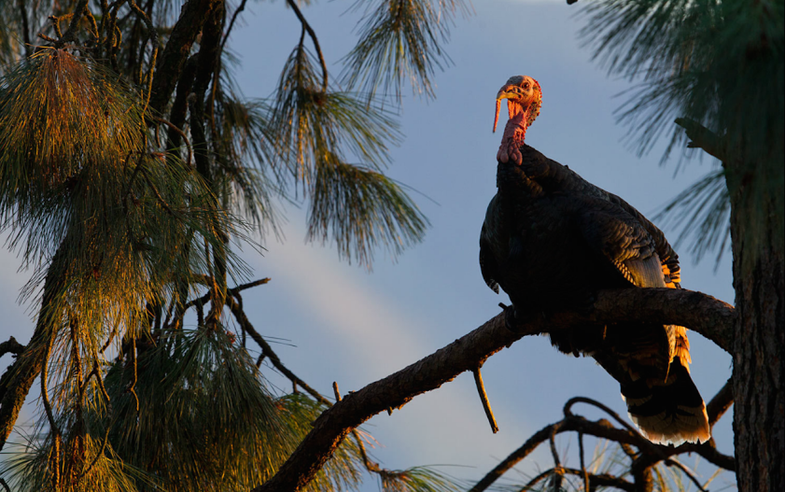 Peenting woodcock, peeping frogs, drumming grouse: spring harbingers come in many forms. Nothing, however, signals the arrival of spring like the first gobble of the season. On one sub-freezing late-March morning 15 years ago, my buddy Kevin Kil­gore and I were determined to be ready to greet it. Spring unofficially arrived shortly before 6 a.m. as we stood along a snow-­encrusted field edge. I owl hooted.

“There’s that son of a gun,” Kilgore said, pointing to a hilltop a quarter mile distant. “Been in the same dang tree since Ma Thompson died. That’s the first time I heard him. Can’t tell you how many days I’ve hunted him. There’s no calling him in!”

It wasn’t until I calculated the years since Ma’s passing that I came to a realization that has forever changed my spring turkey hunting strategy.
“Hey, Kev,” I wisecracked. “She died 10 years ago, bro. You can’t call him in cause he’s stone-deaf.” I’m not sure that Kevin ever got my point.

I’m no turkey biologist, but the likelihood of a gobbler living to see its 10th birthday anywhere in the country is pretty low. Kevin hadn’t found a freak of nature; he had stumbled upon something far better: the perpetual roost, a topographical anomaly that because of a variety of factors—food, terrain, hen-nesting cover, and even acoustics—draws gobblers to it every season. Perpetual roosts exist in every region of turkey country. Find one or two and you’re not just in great shape for a dynamite spring hunt, but you might not ever have to scout again.

1. THE HOLLER
Hills that resonate raucous spring gobbling like a natural amphitheater play a key role in this roost site 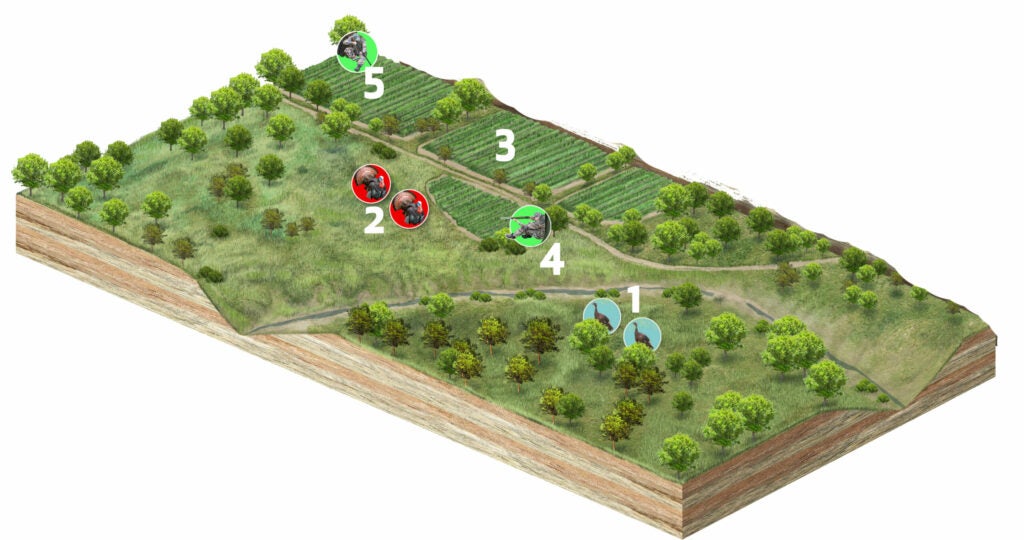 Why Birds Love It
Gobbling acoustics (I’m not sure whether anyone’s ever studied this phenomenon or not) play a prominent role in this roost’s popularity. Dominant toms—one or two each season—typically perch in the mature white pines and hemlocks on the ridgetop point (1) while gathering hens in the pre- and early season. Sound (aka gobbling) resonates in the bowl-shaped surrounding woods like it does in a great concert hall. The “hellion of the hillside,” as one turkey hunter referred to a tom that once roosted here, could yodel once and let the world know that he was king of his domain.

Typical Turkey Travel
The dominant gobbler often lingers in the treetops long after other toms have flown down, as if in defiance of the up-and-­comers. When he is good and ready, this gobbler will pitch off the hill and down into the open swampy bottom below (2), where he will strut, gobble occasionally, and slowly work his way up to the open greenfields (3). As the crow flies, the distance from his roost tree to the fields is less than 300 yards. His up-and-down travel distance is closer to a quarter mile.

How to Hunt It
Old-school turkey tactics tell you to set up above or at the same elevation as a gobbling tom. That won’t do you much good with this longbeard; there is no above, and if you get to his level, you will blow him out of his roost. There are only two ways to take this bird: Set up in the swamp field (4) where he pitches down, or set up in one of the fields where he is surely headed (5).

When the Chips Are Down
If this bird doesn’t come barnstorming in shortly after flydown, fire up the ThermaCell to ward off the blackflies, keep your calls in your vest, and stake out some dekes. Patience will pay off when killer calling goes unheeded.

2. The Road Ditch
Gobblers often choose roosts for quick access to strut zones. These birds have their choice of two 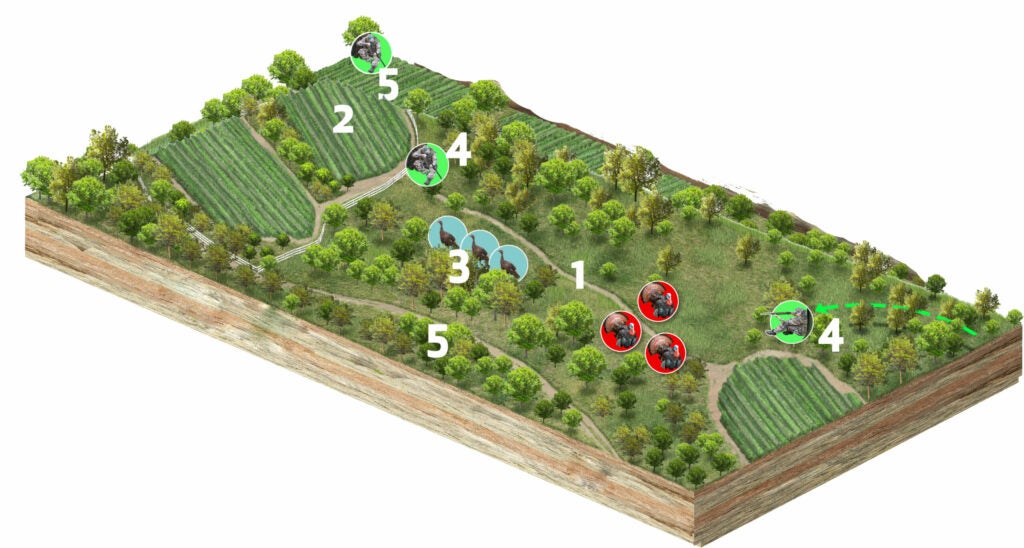 Why Birds Love It
The abandoned logging road (1), which cuts directly through the center of this roost site, is the key here. It’s an easy conduit for travel between two greenfields at either end where gobblers go to strut for hens. Even better, one of the greenfields is on private land (2) that is closed to hunting, which affords birds a protected zone for loafing and breeding during the mid-morning and afternoon. (Yes, sometimes “Posted” signs can be used as part of your turkey-hunting tactics.) Thick nesting cover lies within a quarter mile of the roost. Forestland acoustics might also play a part in this roost’s popularity. On calm days, these birds can be heard from a half mile away.

Typical Turkey Travel
Toms, sometimes three or four, predictably roost within 200 yards of the logging road each evening (3). At flydown, the birds pitch to the road, where they linger and strut for hens or else follow hens to either greenfield, where they continue to strut with the hope of servicing females.

How to Hunt It
An ultra-­cautious approach is critical here. Be careful not to bust through the center of the roost site. Hens, and testosterone-crazed gobblers, will almost certainly reach one of the greenfields and use the logging road to get there. Setting up 50 or so yards off the corner (4) of either field will pay off even if birds are not gobbling.

When the Chips Are Down
As the season progresses, and hens begin to lay, setting up near the nesting area (5) is a killer strategy. Gobblers here, and everywhere else, will follow the hens, and the hens will be heading for thicker cover to drop an egg. This is an awesome place to set up on the last day of the season. 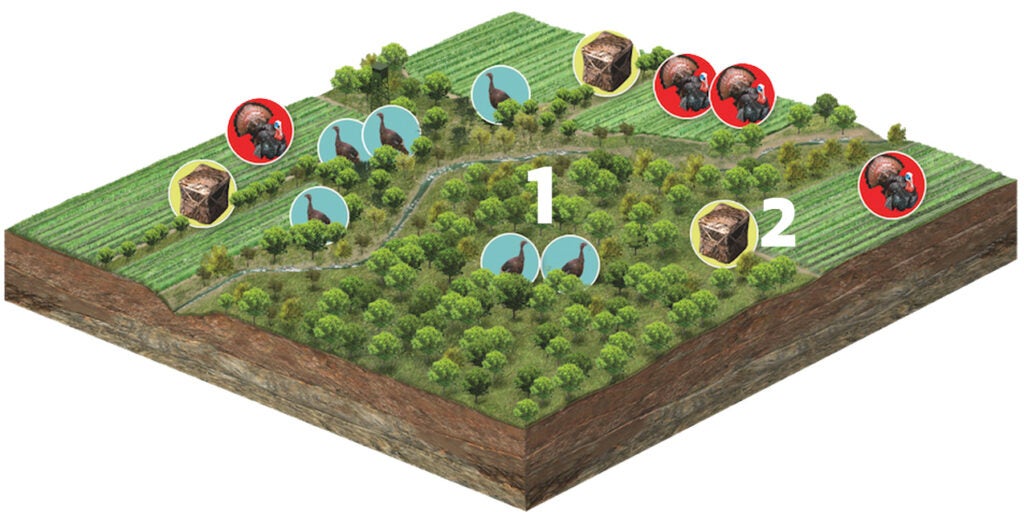 Why Birds Love It
Landowner Frank Imo first discovered this enigmatic perpetual roost site in 2000, and he’s been hunting it with his buddy, turkey-­hunting legend Ray Eye, ever since. Home of Chop Gobble—a tom with an easily recognizable staccato voice—this roost area is composed of mature timber and, perhaps most important, nearby nesting cover (1), and has great acoustics (gobbling birds can be heard from a county road a mile away). Turkeys do not linger near the roost site for more than a couple of hours after flydown, dispersing to parts unknown for the rest of the day.

How to Hunt It
The riddles of this roost are many, according to Eye. Though he’s gone so far as to set up three blinds (2) on three sides of the roost, gobblers here often grow quiet as soon as they hit the ground.

“You never quite know for sure on which side to set up,” Eye says. “We’ve only made the right choice a couple of times, and they always seem to be in a different part of the roost the next time you set up on them. Eventually some gobbler will make the wrong move—unless he’s Chop Gobble. We’ve been trying to kill him for six years.”

When the Chips Are Down
When you’re hunting a studly, ­mature gobbler, slink into position—within 50 yards of his roost tree—a full hour before flydown.

4. Black Hills Ridgeline
A roost in the shadow of Devil’s tower

Why Birds Love It
Merriam’s turkeys consistently select clumps of mature ponderosa pines (1) for roosting, and the open-branched ridgetop conifers on Mike Schmid’s Solitude Ranch in the Devil’s Tower region of the Black Hills is a perpetual roost that pays off with several gobblers each spring.

“I have many areas like this on the ranch, but this is one of my favorites,” says Schmid. “These turkeys like to be near the ridgetops, and the pines provide plenty of cover. The appeal of these spots also lies in the turkeys’ ability to see their landing areas (2) clearly and to pick up the first streaks of daylight in the east.”

Typical Turkey Travel
Gobblers and hens spread across the roost on top of the ridges and pitch down to the highly used strutting and feeding grounds in the lower-elevation creek bottom (3).

How to Hunt It
Putting too much pressure on the roost area can bust a hunt. Setting up either against a tree or in a blind in the strutting area is a tactic that has paid off season after season for Schmid and his clients.

When the Chips Are Down
Sneak into the small park-like openings among the ridgetop pines when the wind is up.