How to Pattern a Giant Early-Season Buck

Your best odds of patterning a buck — ecspecially an older one — may lie early in the season. 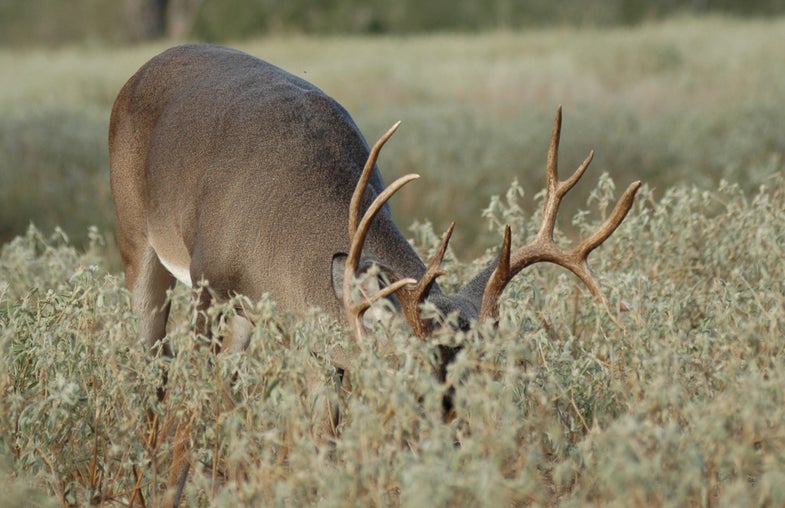 Most hunters think the rut is a mature buck’s Achilles’ heel because that’s when he moves about most during daylight hours. However, once the rut kicks in, predictability goes out the window. A mature whitetail’s most vulnerable period may actually be long before the rut, when he’s far more patternable.

Without the distractions of the rut, a buck has only two priorities: food and security. Once he’s figured out the best place to find both, an older buck will make that his core area, possibly for the rest of his life. Studies of mature bucks fitted with GPS collars have shown that, other than during the rut, they spend the vast majority of their time in 5 to 10 percent of their home range. Your task is to identify that 10 percent without letting the bucks know you’re around.

There is another distinct advantage to the early season. Bucks are often in bachelor groups at this time of year, which is one of the ways younger bucks learn the safest places to hang out. Where you find one buck, you often find several, and their daily activity patterns can be quite routine.
If you hunt open country—plains, prairie, and agricultural areas—you already have a decided advantage: Keep tabs on deer from a distance with a binocular or spotting scope.

Trail cameras can be extremely helpful in scouting deer without alerting them to your presence, which is particularly important when hunting older bucks. Any camera is better than no camera, but those with remote transmission capability are best. Set them up to send images or video clips to a device so you don’t have to visit the cameras often. As you compile several days’ or weeks’ worth of data, you’ll start to recognize patterns.

Just because you’ve located bucks doesn’t mean your job is done. Early fall is a period of transition, and whitetail patterns shift as food preferences change and different food sources become available. Learn the cycles of preferred deer foods in the areas you hunt.

For example, where both white and red oaks grow, white oaks drop their acorns earlier and over a shorter period. The deer will be on them, but only as long as they last. The same is true for ripe persimmons. Deer will eat ripe soybeans almost anytime they’re available, but they really seem to key on them after a rain softens them.

If you did your homework, your best odds for taking a mature buck will be the first time you hunt a stand. Don’t be hasty, though. Wait until all conditions—wind, weather, time of day—are favorable. If you don’t score on day one, hunt conservatively and let stands rest between outings.

If you don’t connect with your target buck before the rut, don’t panic. Research shows he’ll be back in his old haunts after, and then you can pattern him again.