Take one look through the latest Cabela’s or Bass Pro Shops catalog, or down the aisle in Walmart, and you’ll... 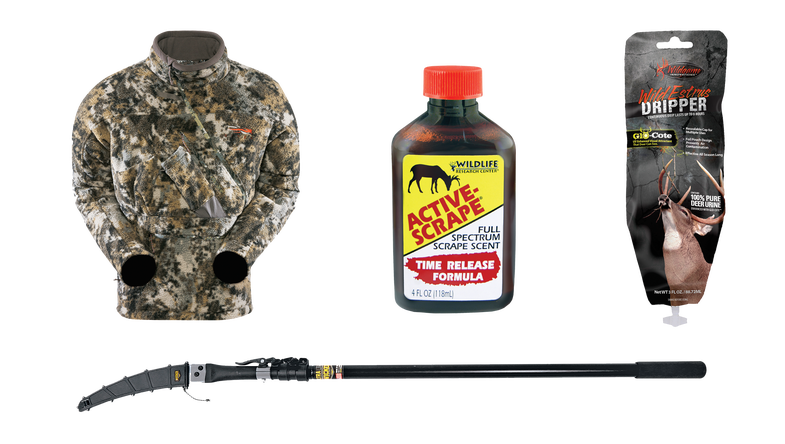 Take one look through the latest Cabela’s or Bass Pro Shops catalog, or down the aisle in Walmart, and you’ll know instantly that bowhunters are gear heads. But as much fun as it can be to accumulate new toys, it can be equally painful to see all that money disappear from your checking account when the time comes to pay the bill. So we’ve come up with five pieces of essential bowhunting gear sure to get your wallet-hand itchy, along with cost-friendly DIY alternatives that the experts turn to when they need to scrimp a little to pay for their next hunt.

CAMOUFLAGE
▶ High end: It wasn’t that long ago that the most impressive technology found on your typical hunting jacket was the elastic band around the cuffs, but that’s quickly changing as technical processes and materials have moved over from other outdoor industries. With innovations such as Primaloft Silver Insulation, the new Optifade Elevated II digital camouflage, and specially designed rangefinder and grunt-tube pockets, the Sitka Fanatic is an ideal suit of camo for the hardcore whitetail hunter. And if that’s not enough, its diagonal cross-zipper design, with its hand-warming pocket, solves the problem of cold hands in the field without the need for heavy gloves. ($400; sitkagear.com)

▶ Low budget: If high-dollar camo isn’t for you, try making a ghillie suit. Jared Scheffler, creator of the Whitetail Adrenaline DVD series, decided to go this route when he found that his store-bought camo wasn’t working well in the prairie environments he hunted.

Scheffler started with simple white thermal shirts for a base and then dyed them yellow to match his hunting habitat. “Then we sewed on brown netting, with the idea that the netting would break up our outline.”

Scheffler used this outfit with great success in 2013, sneaking to within range of several mature bucks. A similar design could be used in more forested habitats by adjusting the colors and materials. (thermal shirt, 5 yards of netting, sewing kit, yellow dye: $30)

POLE SAW
▶ High end: Imagine that the buck of your dreams sneaks in to your stand. You ready yourself for a shot but can’t get it off. Why? Because of that one pesky limb you couldn’t trim months earlier without a pole saw.

Avoid this situation in the future by packing in the latest in portable pole saws by Wicked Tree Gear, the Wicked Ultra Light saw. Available in 10- or 14-foot models, the Wicked Ultra Light’s telescoping pole packs down to 46 inches, in the case of the longer model, and weighs only 3.5 pounds. As an added feature, the saw blade can be unlocked and removed from the pole, and used as a handsaw as well.

From my experience, if you plan on setting up and hunting new stands throughout the season, a pole saw like this is a must-have tool. In the off-season, it’s invaluable for pruning fruit trees in food plots, which helps promote new growth and bigger fruit. ($160, 14 feet; $110, 10 feet;
wickedtreegear.com)

“I keep two sets of 2-inch U-bolts in my pack at all times, along with the necessary number of wing nuts and a basic handsaw,” Ridenour explains. “If I’m going to move a stand during a day’s hunt, or put in an entirely new set, I have everything along with me to just build a a pole saw on the spot.”

He uses his handsaw to cut down an accessible limb of the right length and then uses his set of U-bolts to clamp his handsaw sturdily to the end of the limb at the top and bottom of the handle. (corona folding hand saw, two sets of u-bolts: $25)

DEER ATTRACTANT
▶ High end: Hunters looking to stay on the cutting edge when it comes to deer attractants will be clamoring to try the recently released Wildgame Innovations Wild Estrus Doe Squirt this season. Packaged in an easily transportable plastic bag, the Wild Estrus Doe Squirt is a 100 percent pure deer urine attractant—with a twist. It’s also designed to draw deer into your location visually.

Doe Squirt differs from standard scent attractants because it features a Glo-Cote UV treatment, which is purported to enable deer to see the attractant as well as sniff it out. Research has shown that a deer’s eyes, different than a human’s, lack a UV filter, allowing them to see UV light or in this case the Glo-Cote UV treatment.

Doe Squirt will likely work best in the pre- or peak-rut phases, when bucks will be scent-­checking doe hotspots for females ready to breed. ($14; wildgame innovations.com)

▶ Low budget: Drawing deer in close doesn’t necessarily have to involve a trip to the sporting-goods store; you might be able to get the very same results with nothing more than a successful hunt. The next time you kill a mature buck, cut off the dark brown patch of fur and skin found near the elbow joint on a buck’s back legs. These are the tarsal glands—the only attractant that veteran whitetail hunter and author Chris Eberhart uses, and he’s seen them pay dividends.

“Just cut those glands off, vacuum seal them, and throw them in the freezer. Then next fall, when you’re ready to use them, they’ll be ready to go,” he says.

If you can’t get your hands on glands from a buck of your own, Eberhart recommends heading down to a local deer processor during the season, where, he says, “you can get enough to last for years.”

Tarsal glands are best used during some period of the rut, says Eberhart, and they’re an effective tactic to use when you don’t have a natural funnel to pull deer in close. “Place the gland on the end of a drag rope and run it across a series of parallel deer runways on the way to your stand,” Eberhart says. “Then hang it about 15 yards away, in a tree that is within shooting range.”

This tactic can pull deer in from a wide area, but pay special attention to your scent control when doing this, as any deer picking up the scent of the gland will likely be approaching from downwind, and could just as likely catch your wind. (tarsal glands: free with punched deer tag)

TREESTAND SILENCER
▶ High end: Quality tree stands that set up easily and quietly are a bowhunter’s dream. Problem is, that dream rarely matches reality. Most stands are noisy, and if you’re the type of hunter who likes to tweak stand locations multiple times during the season, it’s inevitable that deer will bust you. Think of Stealth Strips as preventive medicine. These microsuede, camouflage peel-and-stick strips adhere to the metal frame of your treestand and accessories, and help dampen any metal-on-metal sound that might occur while setting up.

They are available in generic strips or as pre-cut sets made specifically for a treestand or climbing sticks. ($45; stealthoutdoors.com)

▶ Low budget: Michigan bowhunter Andy May is a strong believer in the importance of a silent treestand, and has used some type of tree stand silencer for more than ten years.

“Because I’m a pretty mobile hunter, I’m often setting up and tearing down my stands repeatedly during the season, and there’s nothing worse than clinking and clanking up there,” May says. If you opt not to use pre-cut sets such as Stealth Strips, May recommends using an inexpensive roll of athletic tape to achieve the same results.

“I would cover my treestand, climbing sticks, and all of the buckles with athletic tape, ideally black or brown, and then add small patches of moleskin to cover any other particularly noisy contact points.”

Using this silencing trick, May has consistently been able to get close to deer without alerting them, and this has led to the harvest of at least a dozen mature bucks.
“I’m routinely able to set-up within 70 yards of deer without their being aware of me,” May says. “These little details, they can be so minute. But when you add up all of these little things that you think about and improve upon, that really makes a difference.”(45 yards of athletic tape: $3)

SCRAPE ACTIVATOR
▶ High-end: Can you actually force a whitetail buck to make a scrape where you want him to? Bowhunters learned long ago that olfactory cues make it absolutely possible. If you want to get your local bucks fired up, try adding a synthetic scent to a scrape near your stand using the Wildlife Research Center’s Magnum Scrape-Dripper. For maximum effect, the Scrape-Dripper is hung above an active scrape and steadily releases a small dose of Active Scrape scent for two to three weeks. This consistent dose of scent keeps the scrape fresh and should encourage frequent visits from the local buck population.

Use this scrape-intensifying tactic to either get a crack at an early-season buck, or simply collect quality trailcam pictures at the scrape site in order to inventory the bucks that are utilizing your hunting area. ($25; wildlife.com)

“I love making a licking branch by tying two young saplings together with paracord to form an arch about 7 to 8 feet off of the ground,” says Sturgis. “I then tie a piece of a 2- to 3-foot vine to the top of the arch and hang it so the end is about 4 feet off the ground.” His favorite saplings for this unique mock-scrape set-up are young oaks, as bucks will often rub them and they offer a good balance of flex and rigidity. Once your licking branch is created, Sturgis recommends simply clearing the ground and adding your own urine to activate the scrape. (paracord: $4)