An odyssey for an elk proves fruitless—for now 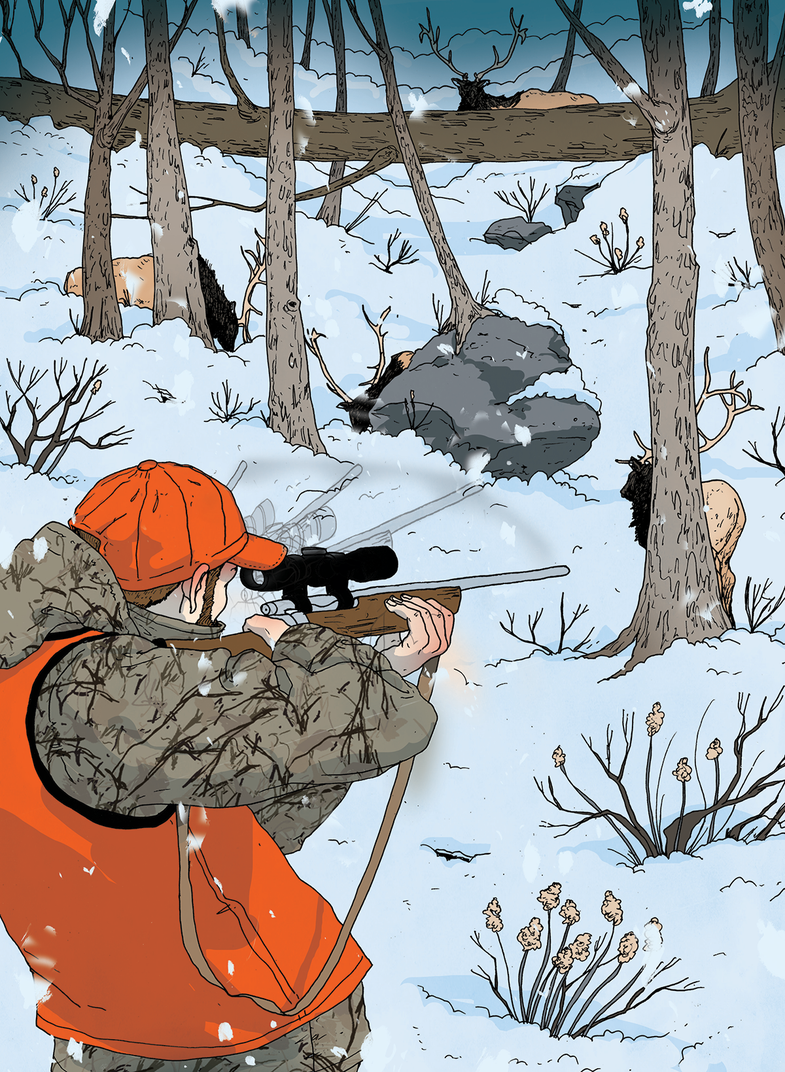 I spotted a story in the paper yesterday. A 12-year-old kid shot his first elk, a 6×6 bull. Now, I’m all for young folks hunting, but a royal bull his first time afield? I’ve been chasing elk for more than 25 years and haven’t shot anything so magnificent.

I still remember the first elk I ever saw. It was half a mile away, plowing through snow up to its belly on the other side of the drainage. What a creature! I thought if I held high on his ears, perhaps the crosswind would bring my bullet to his chest. But I wasn’t confident I could hit him squarely at that distance. Plus, I’d have to push through feet of snow to drag him out.

I resolved to fire next time.

Next time I tracked a little herd that I suspected had a bull in its midst. Finally, after much effort, I reached the spot where I figured they’d be bedding. I looked through my binocular in the hopes of glimpsing antlers above the brush and grass. There he was, looking at me. I dropped my bino in the snow and raised my gun just as he slipped behind a tree. He was a long spike, but I sure wanted him.

I held just ahead of the tree, waiting and waiting for him to move. But he just held and held. Finally, I shifted my gun, and there he went. I got the scope on him just in time, but it was dialed up to 9 and all I saw was hide.

Next time I tracked another little group up the hill, but when I reached their bedding area it was empty. They had seen me coming. I turned around and headed back. Next thing I knew, here came the herd down the hill, 50 yards to my left. A big royal bull led the pack. But they darted in and out of the trees, and I didn’t think I had a clear shot. I held fire.

Next time I was hiking up a mountain with a little group of deer running ahead of me. I was afraid they would spook the elk. There was nothing to do but keep going. Suddenly I saw a back end that sure looked like it belonged to a granddaddy bull. But I wasn’t keen on shooting from behind. Those big horns thrashed across his rump, his hind legs squatted, and he leapt out of sight.

Next time we were running a ridge when we spotted a good bull on a hillside about 500 yards away. We figured we should get closer. We had just shouldered our packs when the crack of a rifle sounded. Bangity-bang, and the bull fell down.

Someone was already closer.

So, I resolved to pull the trigger next time.

But now I’m getting so old, I don’t want to climb that high anymore. So I doubt there will be a next time. That 12-year-old sure looked happy, but I enjoyed every footstep out there, I guess. And if I did get a big one, I probably would’ve forgotten to take his picture for the paper anyway.