Everyone owns a “top dog.” We search pedigrees, interview breeders, attend field trials, or just close our eyes and pick... 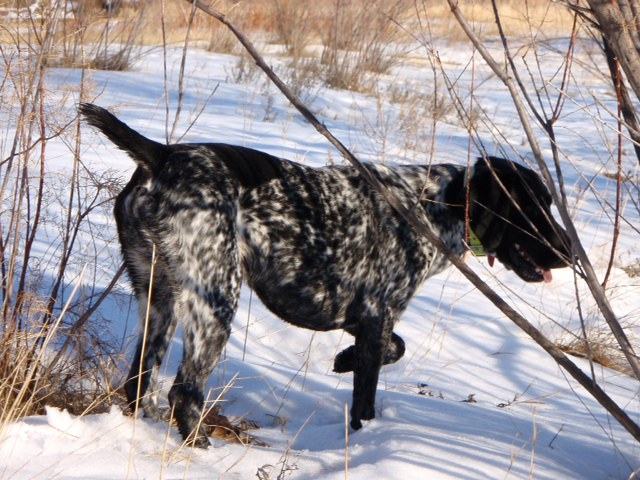 Everyone owns a “top dog.” We search pedigrees, interview breeders, attend field trials, or just close our eyes and pick one from the bunch of squirming balls of fur. We train together, hunt, and ultimately form a bond with our dog that is unique. Our dog may have his faults, but they are overshadowed by his strengths, the unique set of skills and personality that make him a “top dog” at least in our eyes.

Duke was a mid-season replacement on the string at Eagle Nest Lodge in Hardin, Montana. I met him the night he arrived eight years ago, and was intrigued by his old-soul and thousand-yard stare. I asked lodge managerJohn Shirley if we could hunt him the next day, and he acquiesced.

That morning, Duke started tentatively, but who wouldn’t? He was assaulted by new surroundings, handlers, terrain, television cameras, and unfamiliar bracemates. But he approached his work methodically: a find here, a point there, and in the waning moments of the day he put all the pieces together. A solo find on a ringneck, framed perfectly for both cameras on the top of a hill. Bird up, bang! As cameramen maneuvered for a better angle, Duke trotted, businesslike, back up the hill with the pheasant, delivering it to John’s hand.

Duke had evolved from newbie to confident journeyman over the course of that day on the prairie. He’s served John and Eagle Nest clients ever since in the same low-key manner.

All In A Day’s Work // This is one cooperative dog. “Duke will double-up in the truck kennel with any dog and get along,” Shirley said. That willingness to roll with the punches is Duke’s trademark. He works solo, with one or two other lodge dogs, and always meets expectations, whether it’s honoring another dog’s point or retrieving the tough birds. He’ll even pour oil on the waters as two other dogs’ hackles get up, settling the entire kennel with that old-soul glance.

“He’s driven, which is his strength,” Shirley added, “but controllable.” Late-season sharptailed grouse are hinky, so Shirley will keep him close until his hunters pull into a honey hole. On release, Duke works slowly, deliberately. Dead birds are meticulously sussed out no matter where they dropped, always in Duke’s understated blue-collar style.

Defining Moment // An Eagle Nest hunter shot a pair of ringnecks over Duke’s point. One dropped stone-dead. The wing-clipped bird hit the ground running. While Duke delivered the first bird, shooter and guide watched the second bird race over a stream bank into head-high grass, where he disappeared. With little hope, Shirley sent Duke into the fray. Nose down, he carefully followed foot scent down, back, up, around and into the thicket. Onlookers heard the rustle of grass, pause, rustle, pounce, and a deliberate return. No running, no bounding, no victory lap, just a humble rendering of a job well done. It was his first double, and each has been as unremarkable in style, but completed per the work order.

Personality // Shirley says when not hunting, Duke is leaning against the nearest leg. He’s quiet and laid-back, with what can only be described as humility. Duke quickly became “John’s dog,” but when invited to live in the house with Shirley and his wife, he raced for his kennel every time the screen door creaked open. He knows his place in the world, and is just fine with that, thank you.

The Look // Duke appears to carry the weight of the world on his shoulders. He gazes beyond our circle to a place only he can comprehend. It is not a sadness, simply acceptance of the world as it is and where he stands in it. He’s not flashy, but once you know him you have complete confidence in his ability