What a Drag: 3 Killer Buck Lures and Deterrents for Deer Season

Deer survive by their prodigious sense of smell, but you can fool their sniffers if you know when, and how, … Continued 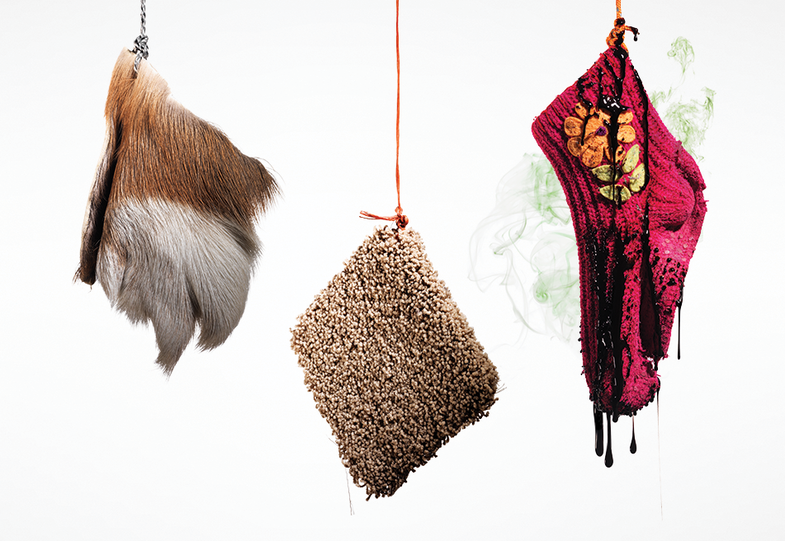 Deer survive by their prodigious sense of smell, but you can fool their sniffers if you know when, and how, to use simple drags. These are either natural or artificial scents that are applied to various absorbent mediums and then towed through the field. Most are designed to attract deer to your stand, but you can also use this tool to create an invisible fence by using especially repellent scents that deter deer from certain areas.

The first time I saw a drag used to attract deer was during a rut hunt in Illinois. My friend Jeff had killed a doe earlier in the week, and as he field-dressed her, he carefully removed the bladder. Later, he doused an old wool sock with her urine, tied the sock to his ankle with a hank of baling twine, and walked with me to my stand, the sodden mop bouncing along after him like tin cans behind a newlyweds’ limo. When we got to the stand, he hung the sock from a ladder rung.

I had a lot of fun with Jeff, calling his behavior “pee-vish,” and answering all his questions with the response, “It Depends,” hoping he’d get my reference to the incontinence product of that name. An hour after Jeff left to hunt his own field, a 4×4 buck came trotting along the very path we had walked, his nose to the ground, obviously excited by the smell of a ready doe. I won’t describe all the ways I missed killing that deer, but I was impressed with the magnetic power of Jeff’s odiferous drag.

Since then, I’ve used urine-based drags during the rut, but I’ve also used them to appeal to the other appetites of deer. And I’ve used them not only to attract deer, but to keep deer away from areas I didn’t want them to go, including an open field in view of road hunters.

THE LOVE LURE
▶ This is probably the most widely used drag—a urine-soaked mop designed to attract doe-minded bucks. It can work all season, from a few weeks prior to the rut all the way through the breeding season. But as Jeff demonstrated, it has a remarkable power to attract during the pre-rut, when bucks are roaming widely, trying to cut the scent trails of ready does. I like using a swatch of hide from a previous kill, but really any medium that doesn’t have a smell of its own will work. While the gold standard is real urine from a local doe, any of the many commercial estrous-scent products will work, and their higher viscosity is an advantage.

How to Use It
You can lead the mop on an elaborate, serpentine path—the more circuitous the better, because you’ll cover more buck-attracting ground—as long as it ends where you are hunting. Reapply the scent to the mop every 200 yards or so, to keep it sufficiently intense.

Alternatives
The tarsal gland cut from a buck may attract males looking to fight a rival, but others might smell the scent as a challenge and turn the other way.

THE ANGRY DOG
▶ Not every mop should attract deer. The job of some is to be repellent, keeping deer away from areas you don’t want them to roam. Because a buck’s sense of smell is already attuned to detect danger, this is a relatively easy task to achieve. My favorite aversive drag is a swatch of carpet that cushioned my Lab in her kennel for years. It reeks of Canis lupus familiaris, which might be enough to repel a deer, but the scent doesn’t stick. For that, I apply my dog’s actual urine to the carpet, collected from grass at her daily duty spot. Because this is such an odious task, I’ve considered switching to bottled coyote scent.

How to Use It
Deer are already conditioned to avoid certain areas of their world: roads and areas frequented by humans. The repellent mop simply reinforces that tendency. I use it to keep deer uneasy about jumping a fence into a field that’s heavily hunted. Hang the mop on a limb or a fence to keep it working even when you’re not around.

Alternatives
Try aversion scents used by landscapers. One of the best is Bobbex Deer Repellent, a repulsive mixture of eggs, meat proteins, and fish oils.

THE BLACKSTRAP
▶ Sometimes you want to appeal to a deer’s taste buds instead of its more carnal instincts, and here’s where a food-based drag can work wonders. I like to use an attractant with a distinctive odor and a high viscosity that will remain on the ground until the next rain. It’s hard to beat a molasses-based substance for both those reasons. First make sure this is legal where you hunt, then try coating an old sock with either real blackstrap molasses or sorghum, or with any of a number of commercial molasses, sweet meal, or grain-based attractants. This drag will work during any season, but it is especially effective later in the fall, after the easy acorns have been consumed and crops have been harvested.

How to Use It
Instead of dragging the mop through open fields and along game trails, I tow it along the edges of fields, close to cover. These are the places that deer are used to finding food, and where they’re often comfortable feeding out in the open. Drag the mop back and forth to create a concentration of scent.