How We Did It in Arkansas

My dad took several business trips each year to Helena, Ark., and he always timed one to coincide with duck... 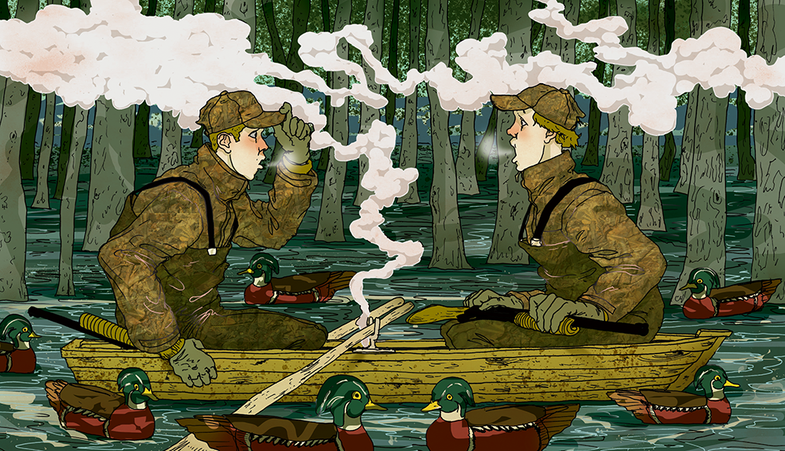 My dad took several business trips each year to Helena, Ark., and he always timed one to coincide with duck season. It was on one of these trips, in the winter of 1954, that Dad invited me to tag along.

I was 16. I remember because I was old enough to drive the rental car from the Memphis airport to the Mississippi River ferry. We were staying with Dad’s business partner, French McKnight. We headed for the hunt club pond early the next morning. Mr. McKnight had a blind on the far shore.

It was cold. Cold enough to coat the lake with a half inch of ice. I was “elected” to ride in the bow and break the ice with my paddle as the outboard struggled through the ice.

By the time we set up decoys and clambered into the blind, I had no feeling in my hands. Mr. McKnight could tell I was freezing my fingers off, and he told me, “I’ve got something here you’re going to like.”

I had seen him unload a big tin can from the boat, packed with charcoal briquettes. Now he poured something on top and dropped in a lit match. Soon that crude “Arkansas stove” was thawing my paws.

We had an excellent hunt, and I christened my new Ithaca Model 37 that day.
Although I was given the frigid task of fetching our downed greenheads, the little stove kept me in good spirits. It was my newest friend, and even kept me company in the boat on the trip back across the lake.

Within a week, I was back home in south Georgia, in another boat. This time I was on Brown’s Pond in search of wood ducks with my hunting buddy, H. Young Tillman. We paddled along in our old rented rowboat. It felt as cold as it had been in Arkansas.

We set up in a thicket of small trees, tossed out a few decoys, and waited. We were used to waiting. If we killed a single woody—or anything with feathers and webbed feet—the hunt was judged a success.

Soon I decided to break out my newly built Arkansas stove. Young shook his head as I emptied most of a can of Ronsonol Lighter Fluid into it. As the coals began to glow, I felt rather smug. Young quickly came to appreciate how we did it in Arkansas. For a while, at least.

I had an alarming thought: Where there’s smoke….

And there was suddenly a lot of smoke. But it wasn’t coming from the can. Instead, it was billowing out from under it. That glowing stove was trying to burn a hole in the bottom of our boat.

To this day, I can still hear Young yelling,

What might sound comical now was, at the time, not funny at all. Brown’s Pond is a cypress swamp: a vast expanse of lily pads and submerged root systems. It was too deep to walk to safety, and too far to swim. Add to those dire facts the temperature, and that not a soul knew where we were.

Within seconds we had tossed the deadly contraption into the water and splashed pond water onto the hissing black ring burned into the wood. How deep was the circle? How thick the floor? Cypress roots can lurk only an inch below the surface, waiting to sink a vulnerable boat.

I stared at the burn, wondering what had gone wrong. Then it hit me—Mr. McKnight had placed a single asbestos shingle under his stove. Genius! When I admitted my foolish oversight to Young, for some reason he did not throw me overboard after the stove. He just shook his head again.

We eventually made it back to the rickety dock. Sixty years later, we’re still friends. Although now I leave the campfires to him.