The Fool’s Errand: How to Piss Off an Elephant

A gang of college kids get high on Africa 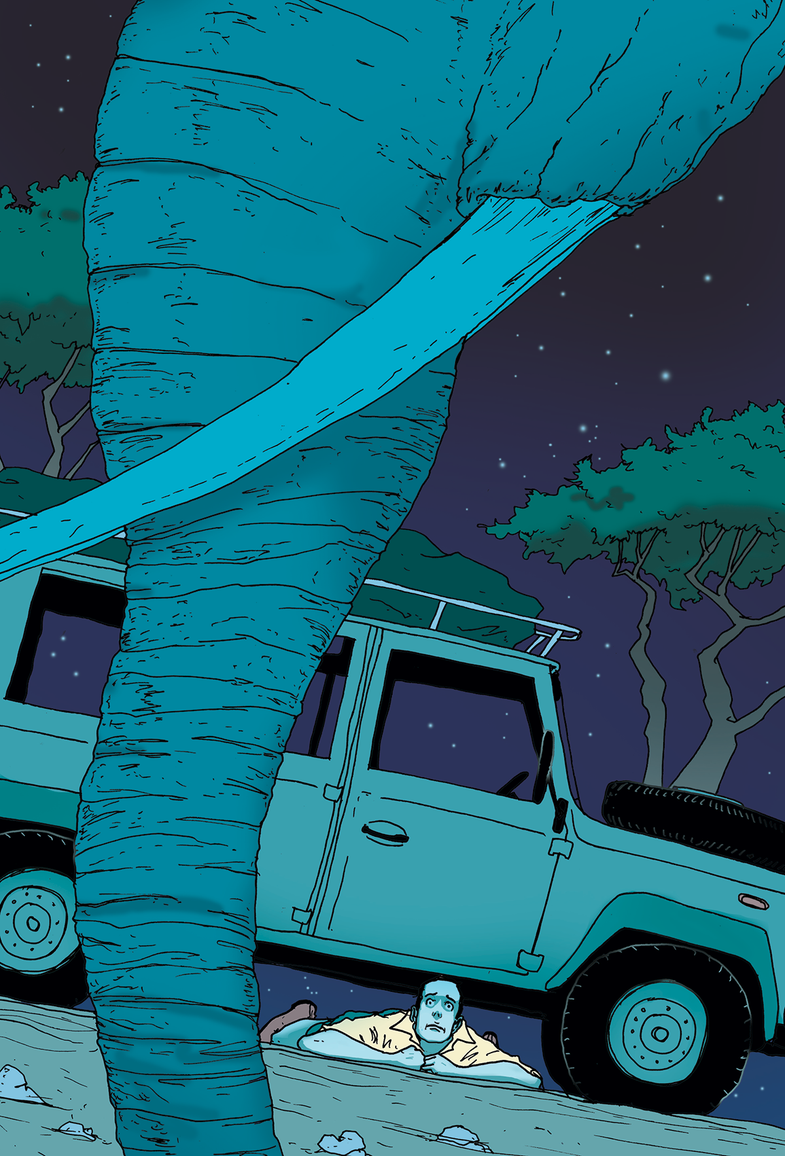 Out in Africa, contracting the condition known as “bush happiness” is always a dangerous possibility. Reveling in the continent’s wild and remote places for a month or so quickly leads to this affliction, which makes a person do incredibly stupid things.

Four of us college students were camped in a grove of giant camelthorn trees in a remote area of northern Botswana. It was spartan, but our camp still had basic comforts—all carted there by a knackered old Land Rover.

The full moon shone so brightly we had no need for a lantern, and it was too hot for a campfire.

To the detriment of our studies, we had been in that environment long enough to become bush happy. I recognized this instantly when Simon suddenly asked, “How much will you each pay me to cut a hair off that elephant’s tail?”

Now, camelthorn seedpods, which resemble the human ear, are to elephants what M&M’s are to kids. The trees we were camped under were heavy with pods, and they had attracted the attention of a massive old bull elephant. With the pace of an arthritic octogenarian, the old fellow visited each tree in turn. He would head-butt the trunk violently, then leisurely collect the bounty, popping pods into his mouth like a beer drinker would peanuts at a bar.

The promise of a pathetically small amount of cash galvanized Simple Simon (as he was soon to become known) into action. From the toolbox, he removed a pair of side cutters and advanced. The sand was soft and deep, and Simon approached the elephant’s rear end in total silence.

Unfortunately, he failed to realize that the tail of a contented elephant never stops wagging. And when he’s popping pods into his mouth, a bull elephant is always content. This continual swishing made it impossible for S.S. to collect the evidence he needed. In desperation, he grabbed the tip of the moving appendage.

This the massive pachyderm did not appreciate, and he swung round with the swiftness of a champion quarter horse.

In those long ago days, S.S. was a fine athlete. Despite the sand, his sprint back to the relative safety of our camp was impressive. But the bull spotted S.S.’s rapidly retreating form in the moonlight. Trumpeting, he lowered his head and gave chase—with equally impressive speed.

In horror we watched S.S. running straight toward us, with the huge bull behind him quickly closing the distance. Like a cluster bomb exploding, we scattered. In desperation, just moments before the bull caught him, S.S. dived under the old SUV—not unlike a ground squirrel seeking the sanctuary of its burrow when a hawk flies overhead. Chairs went flying as the angry old bull trashed our camp, searching for the cowering S.S. Had the Land Rover been overturned in the process, I’m sure our bones would still be baking in the Kalahari. Luckily it remained on all four wheels. After a few yearlong seconds, the old bull gave up and ambled off.

We all thought the incident hilarious. Simple Simon did not. For the next few days he was white as a sheet, and his bush happiness was cured—for a bit.