The Ghost Coon of Tome

An infamous bandit gives everyone the slip 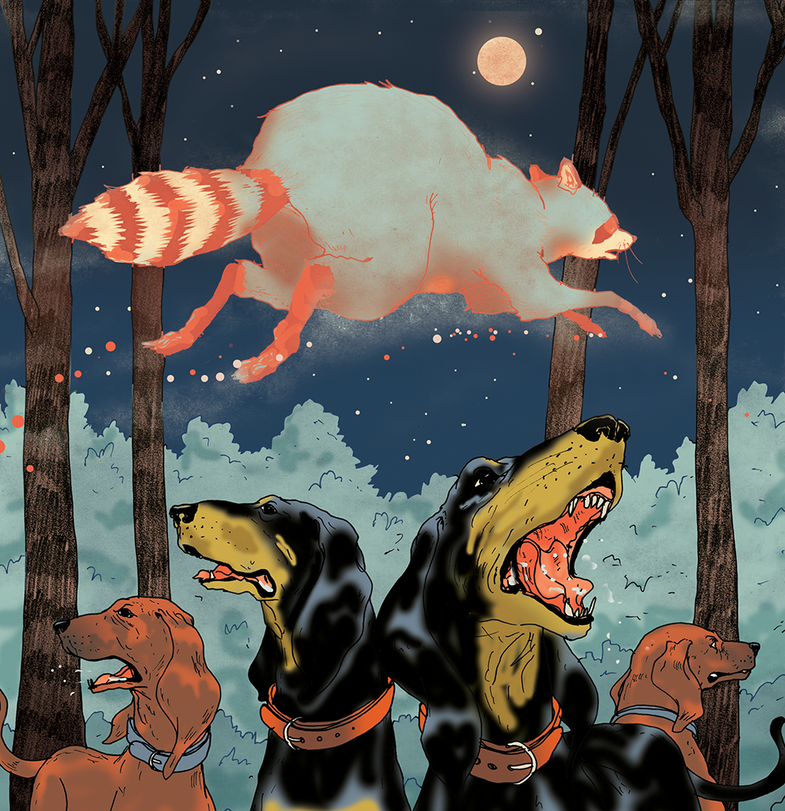 I am giving Pete every chance to redeem himself before I kill him with this stick.

Honest, I’m usually as good a sport as the next guy when it comes to coon hunting on a moonlit New Mexico night along the Rio Grande.

But I had no idea Pete was going to make another attempt to tree the Ghost Coon of Tome.

We’re talking capital G, capital C, capital T. Which is not so much a sign of respect as it is of raw terror. After all, we capitalize the Führer and Red Tsar and Paris Hilton, right?

But the Ghost Coon’s reign of terror is actually our own fault.

Tome (pronounced toe-MAY) is just a wide spot on the road. It’s perfectly legal to shoot coons here, but we don’t. We have more fun than we have coons in this dry old state, so by gentleman’s agreement, we leave treed coons in the tree for the next guy to chase. It’s a hunter’s version of catch-and-release. And that was fine, until one boar coon turned…evil.

You see, after about the 27th time we treed him, he decided this game was fun. Trouble is, so did Pete. Every Friday and Saturday night, that old ghost coon can be found in the same place, waiting.

One night Pete and I went out for coons and, well, I was dozing. He stopped the truck and by the time I’d wiped up most of the coffee I’d spilled, Pete had opened the dog box and released the hounds.

Before I could think of a proper expletive, my pup Molly opened on that Ghost Coon and the race was on.

I can hear you thinking, But that’s coon hunting. That’s what’s supposed to happen.

Not with my dogs it isn’t!

The night’s first victim was ol’ Chief, one of Pete’s best. He was in the lead when he hit that barbwire fence. Pete took him back to the truck while I followed the dogs.

Next I heard them heading toward the highway. The squealing of brakes is an ugly sound, don’t you think? But I heard all the individual barks I should be hearing, so I forgot about calling 911, and the grand party started heading north. Where’s that goofy coon taking those dogs now? I wondered.

I heard the frantic cackling of his hens just before the shotgun blast. Fortunately, Crazy is half blind and three quarters a bad shot, so everyone survived—again.

In a few more minutes, they hit the Rio Grande itself. This is where the Ghost usually indulges in his favorite part of pooch provoking: If the pressure ever gets too great, he swims the river.

I heard the splash. Then the other splash.

When I reached the river, I found four screaming hounds on the bank and, out on the nearest sandbar, Pete’s young hound, Dipstick. I yelled and yelled to ol’ Dip, but he just stayed on that sandbar and screamed obscenities. After I tied up the four smart dogs, I waded out there to get him. It was then that I discovered the Middle Rio Grande submarine channel—the hard way.

I finally washed up on Dipstick Island and grabbed him. I thought dogs were instinctive swimmers, but why swim when you can have an idiot carry you? Dipstick and I beached ourselves just as we heard ol’ Pete arriving.

“Ghost swam the river again, huh? Figgers. Say, why are you all wet?”

Dang it, I had that stick right here a minute ago…