My First Year of Hunting Without Dad

One dad's legacy lives on in a hunting family 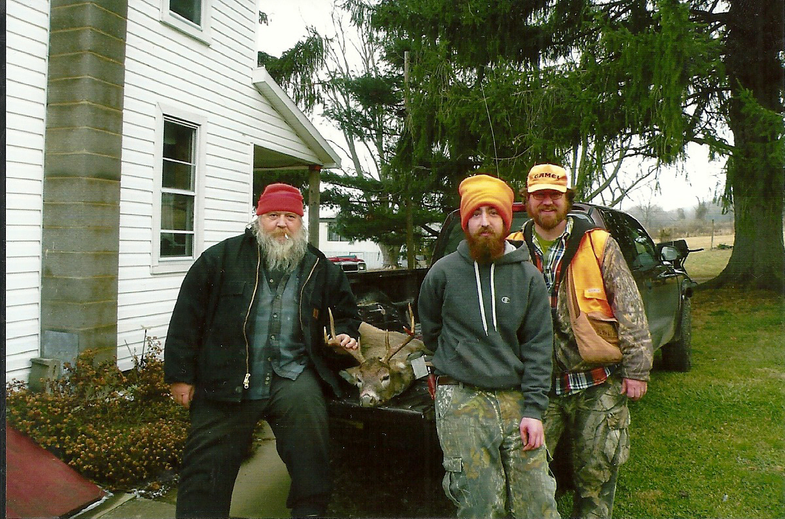 When my dad and his father, who we all called Pap, first laid eyes on the farm, they saw an old corn crib and a pile of cows feeding around it. After a few minutes, Pap realized they were deer, not cows. They bought the land. That was 1957.

When my dad, Jeffery Stephen Ott, started hunting he borrowed a gun that didn’t fire every time he pulled the trigger. That’s how he missed shooting one of the biggest bucks we ever had on the farm. We know it was big because Pap shot it five minutes after it passed by dad. It took my father five more years before he shot his first buck. During that time he was learning the farm and the land around it. He gave areas the names that I am now teaching my son, George Jeffery Ott, Jr. Names like Bench End, Piney Patch, and The Big Hollow, even though it is not that big.

He did well after those years and I’m not sure exactly how many deer he did get but I know we always had deer in the freezer and Dad was always giving our pastor a cut of what he called “preacher meat.” It was years before I learned other people called that the backstrap.

The year before I was to join the gang of mighty Ott hunters, Pap passed away. The gang was only Pap and Dad, because I was not yet hunting, but learning. I had just turned 9 and we didn’t have the mentored youth programs we have today. So I never did get to go hunting with Pap. I did, however, get to take over his hunting area on the farm. I didn’t realize until much later why Dad didn’t take such a good spot for himself. It is very emotional to hunt where there are so many memories. Even the sight of a stand that doesn’t have the person you’re expecting to see sitting it can bring back a flood of emotions.

My dad shot his last deer just three days before he died. It wasn’t his best shooting. For the first time that I can recall, Dad’s shot was not an instant killing shot, and I think it hurt him almost as badly as he hurt the deer. My dad was one of the best shoots I ever saw. If the gun went bang, the deer was dead. If it went bang twice there were two dead deer.

I was 15 or 16 and we had bonus tags because we had a lot of deer back then. We hadn’t gotten deer on the first morning, so Dad asked me what I thought we should do for the rest of the day. Let’s walk on either side of Kenton’s Thicket and see if we jump something to each other. He was unsure of the plan, but he went along with it. He must have bumped the deer first because they came running in those big high rainbow jumps towards me and I made probably my best rifle shot ever as a big old doe came bounding towards me. I shot while she was at the top of her leap, and when her feet touched the ground it was for the last time. Then deer ran everywhere and I stood there tickled that I only shot once and killed a deer. I was known to miss. I then heard Dad shoot and thought, Alright he got one, too. I then heard a second shot, and I was getting ready to poke fun at him for taking two shots when, for once, I required only one.

Family fishing, with the Thunder Truck in the background. From left: The author’s sister Jessica, his brother Mike, the author, his wife Deb, and his dad.

By the time I finished gutting my deer, I could see Dad coming down the hill, and he was struggling something terrible, which was uncommon. My dad was 6-foot, 230 pounds at that time, and he was able to lift things that I thought were impossible. By time he got to me I could see why he was struggling; he was dragging two deer. He caught up to me as I was dragging my one, and instead of me poking fun at him, he simply turned his head and asked why I only shot only once, since we had two tags. Oddly enough, we never saw anything any other time we tried that same drive.

Hunting memories with my dad started to be all I had the last couple of his years. He worked as miner his whole life, one of a gang who smoked like chimneys and drank like fish. Both those things took that giant man and crushed him to where he couldn’t walk because of bad hips, couldn’t breathe because of no wind, and had no desire to leave the bottle. It frustrated both me and him. At times I got mad at him and would let him know it. He would get mad, too, and I understand more now, he was living with the memory of that giant man, also. Even though he didn’t leave the porch of the farm for hunting season the last three years, he still helped me figure out the farm. After I’d been out hunting for a couple of hours, I would get a call on my phone to make sure I was still alive and to get a report about what I was seeing. Then he would tell me about which neighboring farmers were coming down for lunch or had just left. I would tell him to finish up with his gossip because I didn’t want to be on the phone while hunting. Boy, oh boy, do I miss those calls now that I can’t get them any longer.

Dad died in the off-season, and this past hunting season seemed alternately to take forever to arrive, and the quickest to get here. I didn’t know how I’d hunt without my dad at the farm or on the other end of the phone. Luckily, my son is 12 and he is starting to get interested in hunting. As the season approached, we spent time naming deer we saw on the trail cams and talking about the size of the bucks we hoped to shoot, and that helped reignite the hunter in me.

That first week of the deer season was tough. I guess you’d say I was wallowing in my loss, because I realized I mainly wanted to hunt in a stand and remember, which would result in crying, and it’s hard to spot deer when you’re crying. I ended up hunting near Dad’s stand, and if I leaned out, I could just see it. It was missing a few steps and the railing was falling off. I remember when Dad and I built it. It was in the fall and my great-uncle Mark was squirrel hunting. He saw a few bucks while sitting there and told Dad to put a tree stand there if he knew what was good for him. We looked for just the right tree and started building. As we were putting on the platform, Dad stopped for some reason and looked across the bench and, sure enough, a 6-point had come to see what was happening.

I end up hunting harder this year than I had for years. I got a 7-point over at my stand, (we still call it Pap’s Stand). It walked right up to me while I was walking in. After killing it, I got flustered trying to get it dragged down to the house, but I heard my dad’s voice say, “Didn’t I teach you anything? Tag it and go get the 4-wheeler. Work smarter, not harder.” It took a few seconds to realize it wasn’t him, it was me saying it out loud.

My memory isn’t as good as it should be, but I find that in the woods I remember so many things about Dad. Almost every tree keeps him near. In the end I hope it will keep me near my son when I’m gone. My son shot his first deer (a nice-sized doe) this year out of the stand that we put up near Dad’s old stand. Both my son and I were thrilled. When I looked over my shoulder and saw Dad’s stand, I knew he was too.