Peeping Tom: The Hazards of Showering in Lion Country

A cat with boundary issues gets rebuked 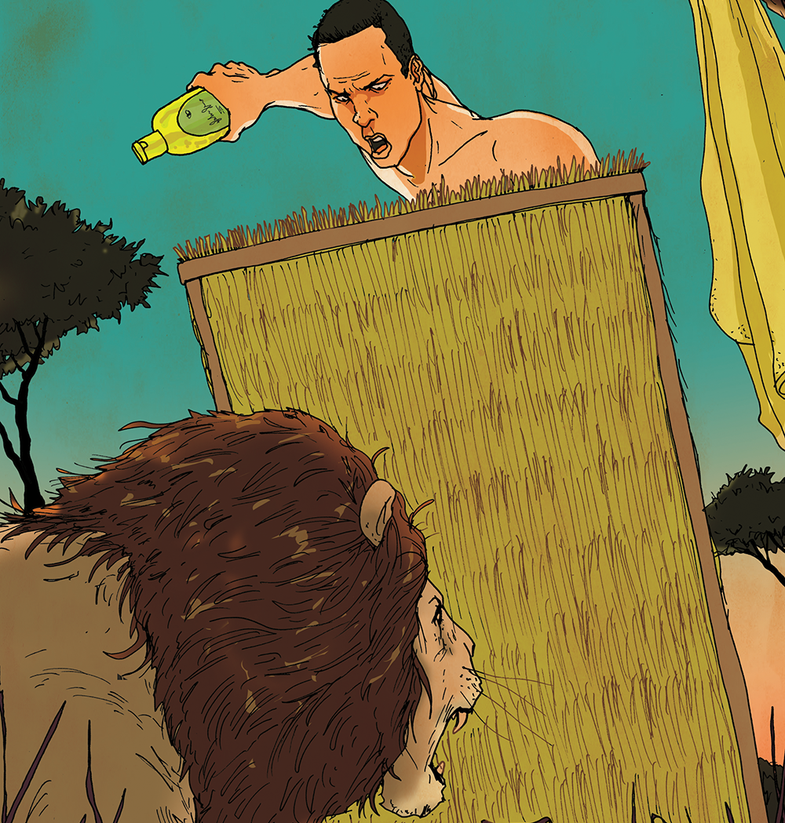 It was the height of the dry season in the Zambezi Valley, and my wife, Catherine, and I were camped near a waterhole that attracted a variety of thirsty game animals. We were on a leopard hunt with my apprentice PH and his wife, but there were other big cats nearby that weren’t quite so hard to track down. A pride had claimed the area as its territory, and the lions were curious—as felines usually are—about the humans intruding on their space. We spotted them daily, usually at a distance. The dominant male sported a short bottle-blond mane and was named accordingly.

Like humans, lions have unique characters. Blondie, we soon discovered, was aggressive to the extreme. The first time I bumped into him, he demonstrated this side of his personality by charging my safari car. For a lion to do so in broad daylight is unusual. This was my first clue that he would cause us some trouble.

The sun had just set one evening, and the light was starting to fade, when Catherine and I decided to use the shower. Our facility was simple: A shoulder-­high grass barrier under a tree, with a 5-gallon can of warm water suspended from a branch above.

As Catherine dried off, I took my turn with what remained of the water. I was vigorously shampooing my hair when my bionic-eared wife announced she could hear something moving in the dry grass beyond our enclosure. I peered over the barrier and received a shock: Blondie was so close, I could have spat on him.

His large, unblinking yellow-ochre eyes locked onto mine as he slowly sank onto his belly. An expression of concentration contorted his face. I was clearly the target on his radar.

Catherine needed no encouragement to flee the scene. Meanwhile, with my eyes glued to Blondie’s, I frantically scrabbled for something with which to defend myself. The family-sized bottle of Johnson’s baby shampoo was closest at hand. I threw it at the lion, and it hit him right on the head with a hollow-sounding thud. I did not hang around to see what effect this might have.

I, too, bolted for the relative protection of our meager campsite, as naked as the moment I was born, and with my hair full of soapsuds.

If I was hoping for refuge, I was out of luck. Pandemonium reigned. Catherine and my apprentice PH’s wife were wrestling one another for the privilege of being first passenger into the single cab of my nearby safari car. So occupied with this task were they that they didn’t notice the lioness that appeared, stalking through the middle of camp.

I must have looked a sight, running buck-naked through camp, waving my arms and shouting like a madman, with shampoo running down my face. The lioness took one look at me and ducked under our dining table, knocking over a metal camp chair. The clatter sent her and the rest of the nearby pride scurrying away.

Of Blondie, there was no sign. I like to think it was my surprise shampoo-bottle attack that saved the day. Catherine felt otherwise, and declared my naked form to be the true dangerous-game repellent.