Deer of the Year: A Bad-Luck South Dakota Buck

As told by Joel Heilman/ Edmunds County, South Dakota In 2014, I killed an incredible 189-inch deer on my birthday. He... 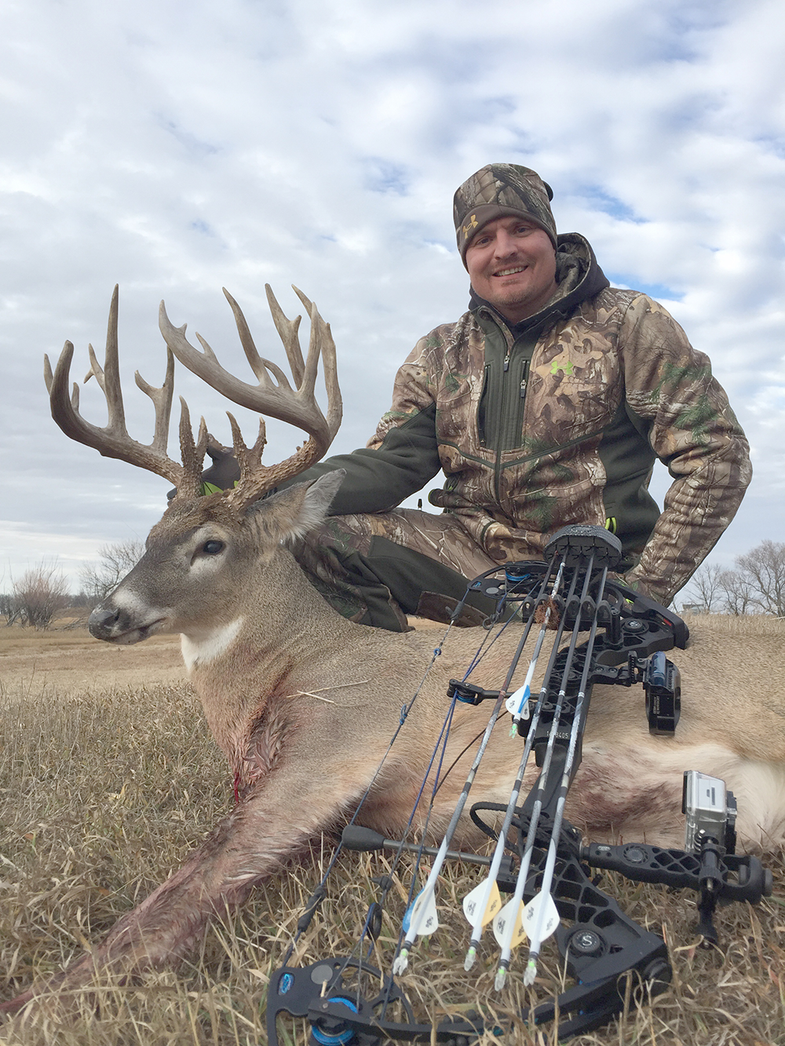 In 2014, I killed an incredible 189-inch deer on my birthday. He was the biggest buck I’d taken to date, and I didn’t think my 2015 season could live up to that. Then, in early November, I pulled the card from my trail camera and realized I had another giant on my hands.

The next few weeks proved to be the most heart-pounding season of my life. It took nearly two weeks to see Stickers in person. One morning I drove over a hill to find him pushing a doe around a frosty soybean field. After about 45 minutes, he lay down on the backside of a ridge—the perfect place to sneak up on him. I was within 400 yards when I heard the engine. A plane flew over, low, buzzing the buck as it went. It didn’t spook him at first, but by the third pass, he stood and walked off. I had work to do.

I moved some treestands around and sat that Saturday morning—and nothing. Then my cousin called to say he could see a deer half a mile from the field he was combining, just standing up and laying back down. Sure enough, it was Stickers.

I snuck all the way back to where he was bedded, so when he stood up again, an hour and a half later, he was 40 yards from me. I was positioned on a dugout mound. I drew from behind a thicket. The buck stalled. Finally he took two steps, but I had to let down. And when I did, grass got between my cam and the string—and popped the string off. The buck kept coming—stopping at 30 yards, then 20, then 10.

I thought I at least got a video on my phone, but I was so stricken that I never actually pressed the record button. After getting my bow fixed, I found Stickers again the next morning, just 200 yards from the place of our last encounter. I rattled and barely set down the antlers before he came charging in.

Finally he paused at what I thought was 30 yards, and I let my arrow go. But it was actually more like 15 or 20 yards, and my arrow barely grazed his back. I watched him walk off, again, and felt sick. Incredibly, he returned to the same exact spot that evening. I had him at 61 yards, but I didn’t feel comfortable taking the shot. Monday morning I found him yet again—with 10 other deer and no means of approach. The next morning it took me a full hour to find him.

I watched him work his way through a cattail slough and toward some standing corn. But I had to leave for work. I hoped he would bed in the stalks. When I returned mid-morning and spotted a bedded deer in those rows, I was unsure if it was Stickers. But I put on my camo and stalked in anyway. I confirmed it was him as I closed the distance to 31 yards and, finally, got a good shot. He grossed 195 ⁴⁄₈ inches.