When an Ohio girl asks her dad if girls can hunt, he gives the best answer possible. He takes her hunting. 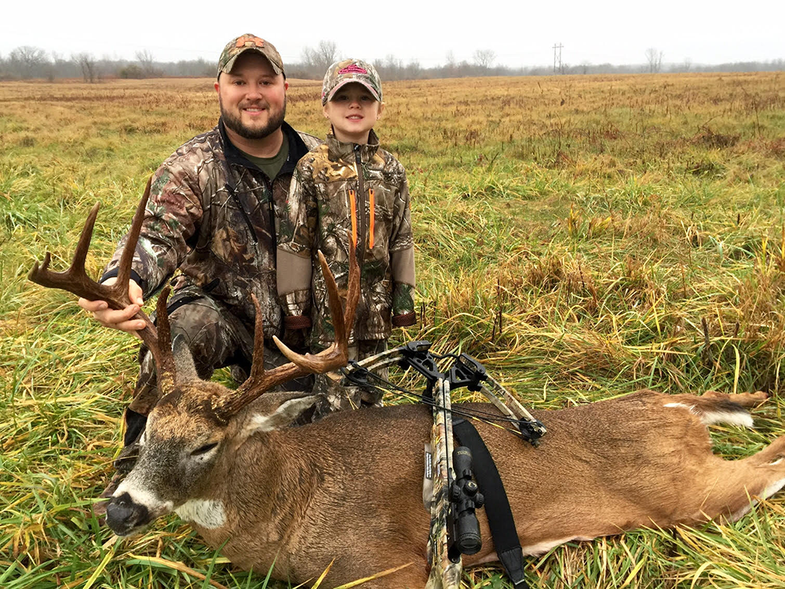 As told by Rylee Howard to Chris Howard/Scioto County, Ohio

Last year, my 6-year-old daughter asked me if girls hunt, too. I told Rylee they absolutely do, and showed her video clips of female hunters, including Tiffany Lakosky and Eva Shockey. That settled it: She wanted to hunt deer with me.

Neither of us could wait until the season opened. We practiced every day with the crossbow and soon discovered Rylee was a natural shooter. After testing her understanding of shot placement, I knew she was ready for the hunt. We made the two-hour trip to our hunting property and camped out in the blind. Within an hour, a few does emerged from the wood line. Rylee picked one and set up the shot.

It was amazing to see such a young kid remain calm and collected. She took a deep breath, and the arrow flew straight and true. I watched it hit just behind the doe’s shoulder, and I knew my little girl had harvested her first deer. I don’t know who was more excited—her or me. Before we left we pulled the memory card from our trail camera. It revealed a big 9-point coming in during daylight hours.

“Dad, I want to hunt that deer next,” Rylee said. All Rylee could talk about was the big buck, but two weeks passed before we could return, when a cold front moved in the Friday after Thanksgiving. We climbed into the blind again, shared a short prayer, and settled in. We started to see deer, but when we didn’t see the buck Rylee had her heart set on, she picked out a big doe instead. Just as she was preparing to pull the trigger, I heard a stick break beside me and told her to wait. Her big buck showed himself.

“Dad!” Ryle said, too loudly. “Big buck, big buck!” I had to calm her, and myself. He had five does with him, and we watched the deer for nearly 15 minutes without a shot opportunity.

Meanwhile, I was getting more nervous by the minute and kept telling Rylee that she needed to stay on him. One of the does spotted our movement in the blind and I thought it was over. When I told Rylee to sit still, she told me to calm down, and I had to smile. Just as the doe was about to bust us, the big 9-point turned broadside. “Dad, I’m on him,” she said softly.

I watched the lighted nock hit him behind the shoulder, just as it had with her doe. He took off into the woods and stopped after 50 yards. He stood for what seemed an eternity, and then fell over. We could hardly contain ourselves, and as Rylee walked toward him, I saw her smiling from ear to ear. She had just taken her first buck.

But the moment that made me most proud happened on the ride home. “Dad?” she asked. “You know how you always tell me to eat all my dinner, because there are families out there that don’t have food?” “Yeah?” “Is there any way to give this deer meat to one of those families?” I was floored.

The next day we drove her buck to the processor and donated the meat. Teaching my daughter what I know about the outdoors is bringing us closer than I could have ever dreamed. I am so proud of the person she’s becoming, and cannot wait to see what the future holds for her.