Deer of the Year: A Pennsylvania Hometown Buck

As Told By Blase Iorio/ Mercer County, Pennsylvania I grew up going to deer camp with my father in western Pennsylvania,... 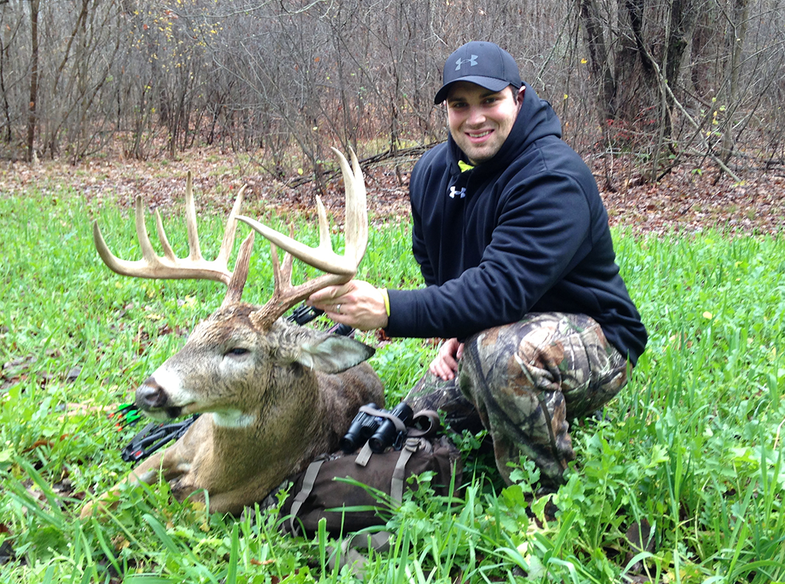 I grew up going to deer camp with my father in western Pennsylvania, where a racked buck of any kind was a trophy. But it wasn’t until about six or seven years ago that I got serious about chasing big bucks.

Four years ago, my wife and I bought a secluded home on 8 acres that was just big enough to hunt, but far from the amount you need to hold and manage deer effectively. After collecting numerous pictures of cruising rutting bucks that first year, I knew I needed to plant a small food plot in the back field to hold the deer.

During the fall of 2014, I began getting trail cam pictures of a low-130s-class buck. He always seemed one step ahead of me. Finding his sheds that winter made it a bit easier to handle the disappointment. I knew that he was likely still around. By late last summer, I was blown away by the amount of bone he had put on. I decided that I’d spend every moment of free time chasing him.

After I’d spent a little over a month in the stand during bow season (which isn’t easy with a two-year-old and a pregnant wife at home), he finally showed himself on the morning of November 12. He first appeared at the back end of my food plot, silently making his way to a scrape 45 yards away. I stopped him with a grunt and released the arrow at 33 yards.

He traveled even less—piling up only 25 yards from impact. Countless hours in the stand all came down to a matter of seconds. I immediately called my dad and my other hunting buddies, as I didn’t want to walk up on him without them by my side. The gross score was 172 ⁵⁄₈ inches.