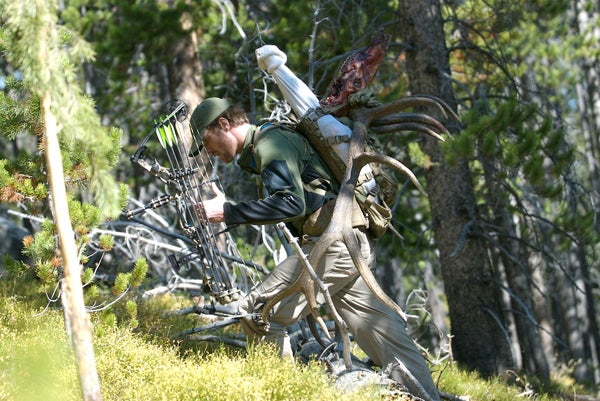 Having grown up hunting in Montana, Mark Seacat has been blessed with the opportunity to pursue Elk, Deer, and Antelope on a yearly basis. He’s harvested great bulls with his bow and rifle while hunting on public land there. “I’ve always dreamed of hunting states like Utah and New Mexico for elk, but until this season I’d never applied for the draws there,” Mark said. Drawing a Utah Limited Entry Elk tag with ZERO bonus points is quite the lottery, but wait till you find out the whole story.

It all started at the Western Hunting and Conservation Expo in Salt Lake City this past winter. Mark and his brother-in-law Andrew Crow were arguing… arguing over just how many units Andrew would/could afford to enter into the Elk Tag raffle that was being held. Andrew didn’t think he could afford any, but Mark explained the fact that this would most likely be his only chance to ever draw a coveted license in the elk hunting mecca of Utah. In the end, they compromised and Andrew entered his name in the hat for only a few choices… as much as his budget could allow. A couple weeks later it was Mark who first heard the news… Andrew Crow would be hunting the Monroe Mountain Unit in Utah in the fall of 2009… how about that for a $5 investment! As luck would have it, a couple months later Mark’s bank account was hit with a $795 credit to the Utah Department of Wildlife Resources… now they both had LE Elk tags in Utah! For two Montana hunters that had never before put in for an out of state license… anywhere, they both now had Utah Elk Tags in their pockets (two tags with a combined ZERO bonus points)!

Mark also picked up great archery elk tags in his home state of Montana and New Mexico… a busy fall was shaping up. One of his friends also hit the tag lottery and drew a Archery Only Dall Sheep tag in Alaska’s Chugach mountain range… Mark was invited to help on the hunt as well as photograph the adventure. Mark’s also been invited to photograph a rifle elk hunt in New Mexico! In the meantime he’s got three antelope tags in Montana and a deer tag that he’ll be documenting. Mark’s father also has a special elk hunt in the Montana Breaks that Mark will be participating on. To sum it all up in two words… this is Mark’s “Dream Season”, one he’s been preparing for since he harvested his first elk at age 12. Mark’s the Marketing Director for Mystery Ranch Backpacks in Bozeman Montana. He’s a great writer, and also a highly recognized professional photographer in both the outdoor and hunting industries. He’s climbed the highest mountains on the continents of both North and South America, caught 12 pound brown trout in New Zealand, and packed out lots of elk… his photos capture the essence of the experience associated with his adventures and Outdoor Life will follow his entire “Dream Season”, LIVE with daily photo galleries, blogs, and video updates almost as they happen.