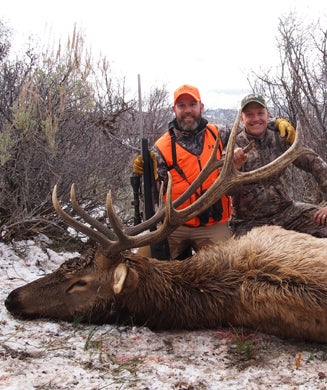 Hunting elk during their winter migration is a world away from hunting them during–or even in the first few weeks following–the rut. By mid November, when the animals start heading out of the high country on their way to their wintering grounds, they have been hunted hard for two months or more. On top of that they aren’t vocal, and with weather conditions worsening and preventing the elk from fully trusting their senses, they become extremely wary.

Utah’s general bull elk season ends in mid October, but outfitters there get an extension on the ranches they lease until November 20. Last month I travelled to Coalville, Utah, an hour north and east of Salt Lake City, to hunt the final five days of the bull elk season with R&K Hunting Company.

Given the elks’ wariness, close shots are virtually unheard of this time of year, and the outfitters advised us to be prepared to make a shot between 300 and 400 yards. Upon arriving in camp, my hunting partners and I hit the range to make sure our rifles were still zeroed after the flight, and to confirm our 300- and 400-yard holdovers at 8,500 feet of elevation.

My elk rig consisted of a Savage Model 116FCSS in .300 Win. Mag., a Weaver Grand Slam 4-16×44 scope with the bullet drop-compensating EB-X reticle, and 180-grain Federal Premium Trophy Bonded Tip ammunition. As you can see on the ballistics cheat sheet I taped to the buttstock of my rifle, I could expect about six and a half inches of drop at 300 yards and roughly 19 inches at 400 yards.

With the scope zeroed at 200 yards, and shooting uphill, I held the first hash below the crosshairs in the reticle halfway between the center and top of the gong at 310 yards, and the bullet smacked it dead center.

Our first day of hunting saw a big snowstorm blow into the region. This boded well for the rest of the week, as 18 inches was being predicted for the high elevations and that would help to push the big bulls low.

But the conditions limited visibility and hindered our ability to glass much of the country. However, toward the end of Day 1, my guide and one of the principals of R&K, Justin Richins, spotted a couple of very large bulls across the canyon from where we sat.

Utah has a reputation for having some of the largest elk in North America, but those are mainly found in the central and southern parts of the state. Where we were hunting, the average hunter-killed bull measures around 280 inches, and any bull that would tape over 300 is one you don’t think twice about trying to kill. Justin estimated these two bulls were in the 320-inch class, but given their location, there was no way to get to them before dark. So, we let them be.

The plan for Day 2 was to hunt a different area, which held a lot of elk (though few large ones) and if I didn’t tag out we’d return on Day 3 to where we’d seen the two big bulls. The snow that had fallen the day before required us to chain up the tires of Richins’ Polaris Ranger to get through certain spots.

But it also revealed plenty of tracks. All of the big bull tracks we cut were too old to bother pursuing, though, and my tag remained unpunched by the time darkness fell on Day 2.

On the morning of Day 3, Justin and I were stoked to find the two big bulls in the same spot we’d put them to bed two evenings prior, plus they had been joined by another bull of similar size. However, their position posed a couple of problems.

First and foremost, the bulls were right on the property line of the ranch we were hunting. If they moved uphill even 30 yards they’d be on a wildlife management area that we couldn’t hunt. Second, the brushy area where they were holed up cliffed out below them, and in order to reach them we’d have to climb up one of two draws, neither of which presented an ideal stalk.

Both climbs would be incredibly steep, but the draw to the north was especially vertical, covered in tall evergreen trees, and blanketed in deep snow. The wind would be in our favor, but if we made a wrong move and bumped the elk, they’d more than likely move onto the WMA. If we chose the draw to the south, the wind would be at our backs, but if we spooked the bulls, they’d probably just move further onto the ranch and we’d still be able to hunt them.

We chose the draw to the south. We climbed up out of the snowy bottom and scaled the rocky, brush-covered south-facing wall, but by the time we reached the top, the bulls were moving with purpose up the hill and onto the WMA. The stalk was over.

As frustrating as it was to have put a lot of sweat and effort into getting close to those bulls only to watch them walk out of our lives, our climb gave us an opportunity to enjoy some of the epic scenery in the foothills of the Uinta Mountains. “The worst part about dying, is having to leave country like this,” said Justin after drinking in the view from this point.

It seemed like every time I looked up I was greeted with another stunning vista.

The afternoon of Day 3 and the morning of Day 4 produced few promising leads. We spotted bulls from time to time while cruising the ranch, but could never get in position for a shot. On top of that, the snow was getting crustier, so stalking through stands of aspen where the elk love to bed became pointless. With more snow blowing in on the afternoon of Day 4, Justin and I sat and glassed from a high point that would afford us views into areas where we’d been seeing herds of cows and small bulls. Our hope was that bigger bulls would work their way down and join up with the cows.

At around 4:30, Justin spotted a couple of bulls about a mile away, feeding through oak brush down the side of a mountain. “I can’t tell how big they are, but they’re branch-antlered bulls,” he said. “Let’s go.”

We drove around to the backside of the mountain and stalked up over it and down through a pasture that dropped into the oaky area where Justin had last seen the bulls. As we approached the edge of the pasture I spotted an elk. Justin threw up his bino and confirmed it was one of the bulls. I quickly got up on the sticks as Justin ranged him at 328 yards. Recalling the rifle’s performance at the range, I held just below the top of the bull’s back and squeezed the trigger.

As soon as the bullet made impact, the bull disappeared into the brush. We watched for a while, hoping he would pop out somewhere, but after about 10 minutes Justin decided to walk down and see if he could find any sign, as I kept watch up high.

Another 15 minutes passed before I spotted Justin waving to me in the quickly fading light. I hurdled sagebrush and slalomed through oak brush until I reached him. He informed me that the bull was bedded a short ways down the hill–he had heard it aggressively popping its teeth as he approached it. I moved in to within 8 feet and finished off the bull as it lay in a clump of brush.

We tagged the 5×6 bull, snapped a few photos, and gutted it in the dark, before returning the next morning to quarter it and pack it out.

R&K Hunting Company runs a first-class camp. Whether you’re looking for a dream elk or mule deer hunt during the rut (and we saw several 200-inch deer over the course of the week), or want to challenge yourself with an epic migratory elk hunt, Justin Richins and his guides are guaranteed to put you on animals.