If you're trying to improve your hunting, fishing and survival skills, there's no better place to start than by quizzing our editors. 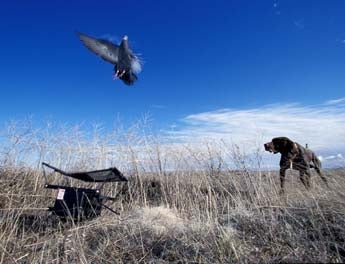 Q:We’ve all seen situations on reality shows in which someone is stuck in the wild with nothing but sticks, stones, a knife and their wits. However, they always seem to get a fire going without a match. Assuming there is fuel nearby in the form of pine needles, birch bark, coconut husks or whatever, what’s the best way to start a fire?
–Jacob Evans, Claremore, OK****

A:Starting a fire without some type of modern fire-starting equipment is a daunting task. The challenge is to find the proper natural materials and prepare and use them correctly.

1. I prefer the bow/drill, in which a “drill” of dry softwood is spun via a “bow” against a notched fireboard. The upper end of the drill is held by hand in a stone, bone or hardwood socket. This is a very successful method, but the materials and technique must be perfect. The correct formation of the crater and notch in the fireboard is a huge key to success.

2. The crater, where the drill makes contact with the board, must be formed near enough to the fireboard’s edge to allow a channel to be cut vertically down through the edge of the fireboard to connect the crater on the top of the board to the notch below. The notch should be conical in shape (wider at the bottom) and directly below the crater. Its purpose is to allow the fine, hot dust to collect as it is worn off of the base of the spindle and the surface inside the crater. If the notch is not large enough or is shaped incorrectly-or if the connecting channel between the crater and the notch is not the right size-there will be no fire. The hot dust should be collected on something that can hold it all together, like a large leaf. After collecting a quantity of hot dust that is sufficient to form a loose “coal,” it can be transferred to the tinder bundle and then blown into a flame.

3. The tinder needs to be more than a pile of leaves. Very dry grasses will work: Wrap them tightly into the shape of a bird’s nest to keep the coal from simply falling through and out the bottom.
–Rich Johnson, Survival Expert

Pike Dentures
Q: Here in the upper Midwest, I often hear about how northern pike lose their teeth in the summertime and that their being sore-mouthed is what makes them so difficult to catch this time of year. Is there anything to the story or is it just an old wives’ tale?
–Sheila Dougherty, St. Paul, MN

A: As is true of other animals, fish can develop a variety of infections, including those of the parasitic persuasion. Some summer angler probably caught a pike that had a red spot inside its mouth along the jaw and said to himself, “Aha! That’s why the darned things are so hard to catch in hot weather. They lose their teeth!” In fact, both pike and muskies continually shed old teeth and grow new ones, not just in the summer. However, the seemingly slowed-down bite this time of year can be better attributed to two things: Northerns gorge themselves on baitfish in summer, and they move to deeper, cooler water as the air temperature increases.
-Jerry Gibbs, Fishing Editor

Sound-Sensitive Dogs
** **Q: When I started training my pointing Lab with remote bird launchers, she readily zeroed in on bird scent. Now she acts hesitant, as though the launcher noise is a warning that she shouldn’t mess with birds. What should I do?
–Donald Langefeld, Lexington, KY

A:What you’re experiencing is not uncommon. Sensitive dogs can get that impression and should be conditioned to launcher noise before this phase of training begins. Make launcher sounds commonplace, and therefore to be ignored, by triggering them frequently as your dog eats and during walks in the field with no birds present. On separate walks let her find, flush and chase birds, if she will, to rekindle interest. When s’s excited about birds again and totally ignores launcher noise, return to well-timed launched birds to teach her that getting too close before pointing results in unproductive flushes. When she points almost at the moment she smells the bird, kill the bird to reinforce work well done.
-_Larry Mueller, Hunting Dogs Editor _

Multi-Pin Sights
** **Q:I’m unsure whether I should be shooting with a multi-pin sight or a single-pin sight on my bow. How can I know which is best for me?
–J. Emersen, via e-mail

A: Each sight has it own advantages and disadvantages. If you’re hunting open plains game like antelope, you’ll be forced to shoot a multi-pin setup. Stacking pins lets you shoot longer distances more accurately. The disadvantage is pin confusion. Many animals have been given a reprieve by archers who rush to aim and line up the shot with the wrong pin. On the other hand, for those hunters in tight canopies (typically Southern tree-standers) with shots not exceeding 30 yards, a single-pin setup is best. A single pin eliminates confusion when the moment of truth arrives. Several manufacturers offer single-pin sliding sights. Move the pin to adjust for longer or shorter shots.
–Todd Kuhn, Bowhunting Exper

Bluegills Down Deep
** **Q: I catch some nice big bluegills in spring, but by summer it seems I can only entice the little guys. Am I doing something wrong, like sticking with the same baits I use during spring? Or have the larger fish just moved to a different part of the lake?
–Jack Phillips, Indianapolis, IN

A: Come summer, bull bluegills hit shallow weed lines, shore brush and other cover just after dawn and again in the evening-if they come inshore at all. Mainly they hang around deeper cover and structure offshore. Depending on the type of lake, deep can mean anywhere from 15 to, say, 35 feet. The fish can be on rock piles, humps (sunken islands), drop-offs at point ends, drop-off ledges along steep bluffs, ends of rock slides, rocky fingers off deep weed lines and also channels near sunken islands. Check these places near the fertile bays where you found the ‘gills in spring. Search for them with a walleye-type bottom bouncer streaming an unweighted spinner rig baited with a worm bit or cricket. Or use a small floating Rapala. Once you find the fish, work them vertically with micro jigs or baits below floats, or any of the small Berkley Gulp! baits.
-Jerry Gibbs, Fishing Editor

Shooting Jitters
** **Q: I’ve shot at several deer with my bow, but I miss a lot more often than I connect. Is there anything I can do to calm down and make the shot?

A: You’re experiencing what every hunter has experienced at one time or another-buck fever. It is actually your nervous system pumping large amounts of adrenaline into your bloodstream, preparing you to perform. While it’s perfectly natural, it’s also a bit overwhelming. However, there is a way to minimize its effects.

Most beginner bowhunters miss deer because they are unfamiliar with their equipment. When the adrenal rush hits, they make rudimentary mistakes like choosing the wrong aiming pin. Prior to the season, practice so often that making a shot is automatic. If you find yourself thinking about any aspect of the shot sequence, you haven’t practiced enough.
–Todd Kuhn, Bowhunting Expert

A: “Sectional density” is a ballistic term much used, abused and confused, as it was by your local “expert.” My guess is that he had sectional density confused with “ballistic coefficient,” which frequently happens in clubhouse discussions.

In simple terms, a bullet’s sectional density (SD) is a numeric expression of its weight-to-diameter ratio: Bullets that are heavy have a higher SD than lighter bullets of the same caliber. For example, a 110-grain .30 caliber bullet has an SD of .166, whereas a 220-grain bullet of the same diameter has an SD twice as high. Though SD can be calculated, it usually isn’t worth the bother. Simply looking at two bullets you see which has the higher SD, and it’s of little help in the more complex calculations of trajectory. All things being equal-which they almost never are in the ballistics universe-bullets with a high SD maintain their momentum better and penetrate deeper than lighter bullets of the same caliber. But don’t take this to the bank, because when such variables as velocity, bullet shape and construction are tossed into the stew, terminal performances can vary widely.

As for calculating trajectories, one of these days I’ll get around to writing a column about the mysterious “ballistic coefficient,” which will provide some understanding as to how trajectory charts are calculated.
–Jim Carmichel, Shooting Editor

Water Camo
** **Q: I try to keep a low visual profile while wade fishing. My buddy thinks I go overboard when I wear camo on the water. He usually does well even when he wears bright-colored shirts, but I think I beat him out on bigger fish. What’s your take on the importance of the color of your fishing clothes?
–L. Tracy, Boston, MA

A: In a nutshell, it depends on where you’re fishing, the water clarity, how deep the fish are and what you’re fishing for. In shallow, clear saltwater, for instance, a white shirt and hat alerts fish whether you’re wading or in a skiff. I won’t show up in red or bright yellow on a shallow clear-water stream even though the colors can make for pretty pictures for your bragging album.

Going the extra step and wearing camo shirts, shorts and caps (one manufacturer is Aqua Design; aquadesign.com) can make a difference with extra-spooky fish in open-water environments (tropical flats) or in some of our more open spring creeks out West. This isn’t really the case on typical freestone streams and rivers, where any muted coloration tends to blend with a woodsy background. Besides, in those rivers, if you’re close enough to present a silhouette directly against the sky, you’re too close.
-Jerry Gibbs, Fishing Editor