Exclusive Outdoor Life video helps you speak to coyotes in their own language—put fur on the ground. 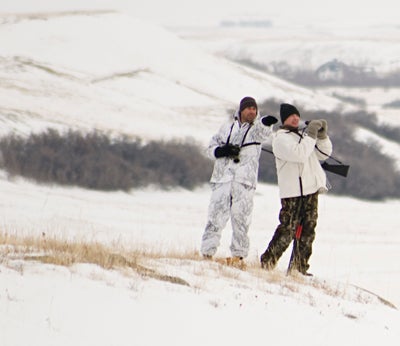 It’s 3 p.m. on a February afternoon and here in Saskatchewan’s desolate Grain Belt the straightedge horizon is already dissolving in a grainy gray twilight. The relentless wind is honed by icy pellets that haven’t touched ground since they left the Yukon. I can’t feel my toes and my eyelashes are starting to freeze shut underneath my facemask.

But I hardly notice. Five coyotes are loping up the bottom of a deep, brushy coulee, spreading out as they approach the snow-drifted fence line where Jason Peterson and I are hunkered down with a .223 and a box full of howls.

It’s this box–actually, a high-volume FOXPRO electronic predator call–that is responsible for conjuring the coyotes out of the snowbound Canadian prairie.

It’s our third day of hunting and we figure this pack brings the total number of coyotes that have trotted in to our call to more than 40. We haven’t killed all those dogs–in fact, we’ve missed every way possible–but we have learned how to speak to them in their language.

We are here in central Saskatchewan to experiment with howling, using coyotes’ own vocalizations to draw them into rifle range. The flashlight-sized FOXPRO is like a digital Rosetta Stone, loaded with sound clips of territorial males, bitches in heat and lost and wounded pups.

Like the bank robber who justified his choice of crime scenes–“It’s where the money is”–we have come to this snowbound wasteland because it’s where the coyotes are. The prairie here is a monoculture of grain, the hub of a food web radiating protein to rodents and birds that in turn feed predators. The rougher breaks are blown clear of snow, and thousands of mule deer and big Canadian whitetails winter there. Moose hunker in willow-bunch coulees adjacent to wheat fields.

And coyotes roam at will through this smorgasbord. When we checked into the hotel in Rosetown, the desk clerk complained that he had to keep his dogs and cats in the house even in the daytime because aggressive coyotes were coming right to the back door of his rural farmstead.

This seemed like the perfect laboratory to test our thesis, that howling can be more effective than traditional rabbit-in-distress calls.

That notion is confirmed every time I take my dog for a run in town. Every block we enter erupts with howls, barks and whines of fenced-in dogs that want to sniff, attack, breed or simply greet my Lab. These are presumably well-fed pets, but they know immediately that a strange dog is in their midst and want to make contact.

Coyotes are no different. The wild canines are born hungry, and most die with empty stomachs, but even stronger than their appetites is their desire to bond, to hunt and fight and howl together. To form packs.

“Successful coyote hunters have to fire on at least three cylinders,” says Al Morris, winner of the World Coyote Calling Championship. “Coyotes have to eat, but they also have to breed and they have to protect their territory. If you just use a prey-in-distress call, you could be missing two-thirds of the coyotes out there.”

Jason Peterson, host of a televised hunting show in Canada and a longtime predator caller, agreed to help me test my hypothesis, and he’s driven over from Saskatoon with his FOXPRO and a bolt-action Remington that he may or may not have ever shot before. Because I’m a nonresident and we’re south of Saskatchewan’s forest, I can’t legally hunt here. So I’m the navigator and statistician, armed with a reporter’s notebook to log our stands and call sequence.

Our plan is to start each stand with a different howl, then try various vocalizations until we unlock the one that will appeal to a coyote. Some stands will start with a low, mournful lament that rises to an eager lilt. That’s a greeting howl that will presumably beckon any coyote in the countryside.

Another consists of a rough, short barking howl. This is a territorial signal, a warning to other coyotes that this country is the domain of a mature male. Still another will open with a female invitation howl–a high, keening wail of a female coyote in heat, announcing her libidinous availability. This should work especially well now, during the breeding season that extends from late January through mid March. We will also use a lost-pup howl, shorter and higher-pitched than adult vocalizations that can often suck in female coyotes. Finally, we have a wounded-pup cry, a tortured yelp that sounds exactly as though you just slammed your own dog’s tail in a car door.

Our first stand looks promising. In the shadow of an abandoned granary, we set our call on a fence post and broadcast a generic greeting to a wide creek valley. No response. We wait 10 minutes and then blare a female invitation howl. Still nothing in the gathering gloom of a winter twilight. Then we see them, a pair of huge, rangy coyotes edging toward us along a snow-drifted fence line.

Jason reprises the howl and the coyotes break into a run. About 500 yards out, because they cut our scent or spot something hinky, they stop in unison, mill nervously and then turn and trot away in the direction from which they came.

We draw our first blood the next morning, in the shadow of an abandoned homestead overlooking a small stream filled with whitetails and willows. Before we called, we glassed the surrounding uplands and spotted a pack of coyotes lit up by the rising sun, trotting through a herd of deer. They were neither stealthy nor focused; instead, the predators appeared to be systematically milling the deer around to see which were weak or wounded.

When we started calling–a male challenge howl–about half the coyotes bolted in the opposite direction. The other half split up and started our way. But before they came in range, a red fox popped out of the valley and stood staring in our direction, its coat crimson in the rising sun. Jason ranged the fox at 200 yards and dumped it on the second shot. The incoming coyotes braked, but Jason immediately sounded the hurt-pup wail, and the coyotes resumed their approach.

But the next animal in Jason’s scope wasn’t a coyote, it was a black-and-white shepherd, a domestic dog from a neighboring farm, checking out the commotion. We let the dog pass then resumed the territorial calling. A coyote, juking in and out of willows, closed to 100 yards and Jason killed it on his third shot.

The day was bright and sunny and coyotes were actively feeding, so we decided to hit as many likely spots as possible. That meant having a plan and a certain discipline. We would open with different howls, but once one delivered a coyote, we’d stick with it until it failed. We would stay on a stand no more than a half hour.

And because of either the day or our formula, we were covered up in coyotes. A challenge howl pulled a lone coyote out of a dry lakebed–when Jason missed, two other ‘yotes busted out of the cover. Another coyote left with a limp and a sense of urgency after it answered a female invitation howl and Jason creased it with hot lead. Toward evening, we set up in a rookery of boulders as a winter storm moved in. We could see a coyote hunkered on the edge of brush more than a half-mile away, but it wouldn’t come to either challenge or invitation howls.

So we wound up the pup call and started working the coyote in with a series of tragic yips and tortured yelps. Little by little, the coyote approached, ears forward, obviously looking for the wounded pup making such a pitiful racket. Jason, rattled by his shooting, tucked in to his rifle and waited. And waited. The coyote was so close I could see its pupils scanning the rock pile before a gunshot split the air. Then another. And another. Finally, the coyote expired and Jason mumbled something about getting that scope checked.

Our third day featured similar success coaxing coyotes out of the winter landscape and the same stunned surprise at even more misses. The female invitation howl worked most consistently, but we also called a pair of coyotes with traditional jackrabbit-in-distress yammers.

My notes indicated that we had called 38 coyotes in by the end of our third afternoon, as the wind sharpened and snow sifted across the landscape. We walked to a deep, deer-filled coulee slicing through wheat fields and tucked into a fence line at the top of the draw. The minute we fired up the female invitation call, a coyote popped out of the brush 800 yards away, sat on a snowy ledge and casually looked our way. No matter how we amped the volume or changed the cadence of our call, the coyote wouldn’t unlock.

Then we changed to a male challenge howl, and the coyote jumped up and started running toward us. It was as though we had lit its fuse, but that wasn’t all. Four other coyotes poured out of the willows and joined the first.

I don’t get rattled too often, but suddenly I felt like prey myself, watching the predators home in on our location, spread out like a military formation, and close in. They were totally keyed in on the call. When we stopped playing the howl, the coyotes stopped and sat down. We turned it back on and they resumed their approach. At about 300 yards the coyotes changed strategies and turned downwind, trying to flank us so they could cut our scent. Any minute they would turn into the wind, smell us and the game would be over.

They disappeared over a rise and Jason jumped up and ran to a high spot. When the pack appeared they’d be well within range. I stayed in the fencerow, trying to unfreeze my eyelashes. A shot cracked through the gale. Then another. Then two more before Jason returned to the stand, the downcast look on his face explaining everything.

But I didn’t care. We had talked an entire pack of predators nearly into our laps using their own language. We had seen the light in their eyes as we provoked some deep canine need to join the pack, to fight a rival, to tend a pup. Besides, the approaching darkness meant I could leave the frozen tundra, thaw my feet and warm my fingers. And haunt Jason about his marksmanship.