Try these hot spreads to make your decoys say the right thing to geese. 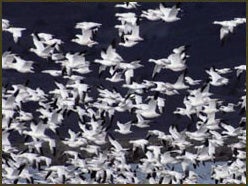 We heard the geese before we saw them, and they were close. “Get down….Get dowwwnnnnn! Geese locked up and comin’ in,” said Fred Zink as he raced back to his one-man blind while toting a pair of Canadas we’d just collected out of an earlier flock of birds. We covered up quickly in our individual camo field blinds, everyone tense and watching for the incoming birds. Zink practically dove into his blind, snuggled down inside the folds of camouflage and started calling. Todd Svoboda joined him and together they created a pleasing goose concerto for the large V-shaped flight of Canadas that suddenly appeared low on the horizon downwind of our hillside field-hunting spot.

As the honking birds closed the distance between us, they slid a bit wide of our decoy spread and surveyed the setup. They weren’t completely fooled by our fake flock of 100 decoys, nor by the championship-caliber calling produced by Zink and Svoboda.

“Tone it down, Todd,” Fred said softly. “Let’s be quiet. Let ’em work. The decoys will do the talking.”

Zink gave an occasional soft honk with his flute-style call. But the loud and incessant honker greeting calls ceased. The geese circled wide, long necks and black-and-white heads turning and looking down at our one-man blinds and the precisely placed decoys that had been set out before dawn with the aid of truck headlights. The birds looped well out of range around us, perhaps 100 yards away, then circled again and inspected the spread. Finally, they banked again and sailed downwind on the opposite side of our decoys. With the breeze in their tails they quickly moved away from us and for a moment I thought they were leaving. But then they turned, again into the wind, locked their wings, dropped altitude and started their final glide. Fifty pairs of sharp goose eyes scanned every inch of our hilltop from above.

It was the moment of truth, the critical few seconds before decoying geese commit to land in a field spread. No one moved as the geese continued their descent into our deadly ambush.

“Now! Now! Take ’em!” roared Zink, and we all rose simultaneously. Then came a blur of sounds and sights: shotguns blasting, geese rolling and falling, a Lab running and grabbing limp sacks of black-and-tan feathers.

That was the scene repeated often that morning, and the next one, too, as we collected daily limits of Canada geese in the barley fields of northwestern Saskatchewan. Although Zink is a three-time national goose-calling champion and winner of 25 calling titles, he insists that proper placement of decoys during that hunt was the single most important factor in consistently duping those geese, as well as most others he encountered over a long hunting season last winter.

“Decoys on the ground communicate with geese in the air,” explains the 31-year-old Ohio waterfowler. “You can hunt a great spot. You can be a world-champion caller. But if your decoys aren’t positioned correctly, or if you’re using the wrong types of decoys, odds are you won’t take as many birds as you could have if you had communicated better with the geese by placing your decoys correctly.”

The well-traveled Zink’s extensive hunting forays throughout North America have educated him in the body language of the various geese and what they expect to see when they’re invited to drop in to share a meal in a harvested field. Every year Zink starts his hunting season in October in Saskatchewan, often out of Grant and Shelly Kuypers’ Buck Paradise Outfitters (306-344-4638) near Paradise Hill. He follows the birds and the season south from there, working his way through the Midwest, East and mid-South before ending up on the Texas and Louisiana Gulf Coast.

Watching Zink set out decoys on a field-hunting site is like observing an artist transforming real life to canvas. He notes wind direction, then starts setting out decoys while advising his hunng companions about where to place the various types. When all the dekes are positioned, Zink walks in and around the spread, studying it carefully and adjusting decoys. Even when there are hundreds of decoys in the spread, Zink takes pains to make sure that not one of them is in the wrong place or turned the wrong way. He sculpts a masterpiece on mud, creating a decoy spread that perfectly imitates what real geese do in the wild. While many different configurations of field decoys work for varying hunting conditions, Zink relies on a few that consistently work for him through a season of goose hunting.

Late-Season Spread
Toward the end of the season, it’s hard to fool the oldest and wisest geese, which have survived several seasons in hard-hunted areas. While many hunters believe huge field spreads are most appealing to smart geese, Zink insists that smaller decoy spreads draw the wariest birds best. That’s what he goes with wherever Greater Canadas predominate.

“Every hunter is putting out huge spreads for Canadas late in the season, especially on big waterfowl clubs where they leave hundreds of decoys out overnight,” he explains. “But smart geese learn that big spreads are dangerous, so they shy away from them.

“To be consistently effective, I like to move often to different field-hunting locations and put out only a few decoys, never more than thirty. A field set of about eighteen decoys is perfect, because it’s easy for three hunters to carry to a hunting spot. Plus, messing up decoy placement is harder to do with only a few dekes,” he adds.

Zink says this spread should be set rather loosely, allowing for plenty of landing holes for incoming birds. He notes that geese rarely try to land in the biggest wad of decoys. Zink positions field blinds off to the side of the spread, so birds landing into the wind are not looking directly into the faces of hunters, which can alarm them at the moment of truth.

Light-Wind Spread
This is a long and narrow spread Zink favors when Lesser Canada geese are prevalent and there is little or no wind. It’s difficult to direct where geese land due to a lack of wind. Bunched decoys (no more than 10 dozen) help put approaching geese exactly where Zink wants them above a field spread. Two vitally important aspects of this spread, says Zink, are family groups of goose decoys positioned in straight lines just downwind of field blinds, and “sentry,” “feeder” and “walker” decoys positioned properly.

Greater Canada geese and ducks will work into this spread, too, says Zink, provided there are adequately large landing holes. All walking and feeding decoys should be positioned facing the wind. Be sure available food in the field (grain, for example) is in the upper end of the spread, with head-down feeder decoys massed there. These finish the deal, drawing geese that want to land short of the feeders, where open holes in the decoy spread are located within shotgun range of hunters’ blinds.

Snow Goose Spread
This is a huge spread that can involve several hundred decoys, which is one reason most snow goose layouts have lightweight and relatively inexpensive wind socks, silhouettes and rag decoys, that are usually squares of white plastic tablecloth. If full-body decoys and shells are used, it’s best to have them in the perimeter areas of the spread, especially downwind.

“The great mass of decoys used should be feeders, which is another reason rags are so common for this spread, as they simulate feeding geese so well, plus provide motion,” says Zink. “Incoming birds will almost never land in the sparse sets of decoys downwind. The mass of decoys in the upwind area is far more appealing because they signify safety and the exact location of food.

Cold-Weather Spread
“Naptime layout” might be a better name for this Zink favorite. The spread’s most notable feature is the large number of decoys that emulate sleeping geese. Yet there are many sentry decoys on the fringes, suggesting to incoming birds that this is a guarded safe haven.

“The large hole or landing area downwind of the blinds is an important element,” explains Zink. “A goose tries to keep itself in a spot where another goose is between it and danger, especially late in the season or during cold weather.

“Sleeper decoys tell incoming birds that most of the geese on the ground are full from feeding in the field. This is an important communication, showing that there’s plenty of feed in the area. Also, geese want to land near the sleepers because there will be less competition for available food.”

e spread’s most notable feature is the large number of decoys that emulate sleeping geese. Yet there are many sentry decoys on the fringes, suggesting to incoming birds that this is a guarded safe haven.

“The large hole or landing area downwind of the blinds is an important element,” explains Zink. “A goose tries to keep itself in a spot where another goose is between it and danger, especially late in the season or during cold weather.

“Sleeper decoys tell incoming birds that most of the geese on the ground are full from feeding in the field. This is an important communication, showing that there’s plenty of feed in the area. Also, geese want to land near the sleepers because there will be less competition for available food.”