Get a jump on spring gobblers by making the most of your time in the winter deer woods. 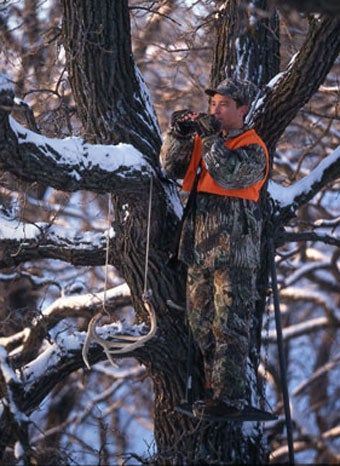 I had recently moved to South Carolina to start a new job and found myself frantically searching for a place to hunt before the ridiculously early August 15 deer opener. Checking the newspaper, I found a spot. It was a shared lease, a little pricey, with 25 members hunting 2,800 acres, but it was 15 minutes from my house and, according to the old guy who ran it, loaded with deer, squirrels, hogs, coyotes and wild turkeys. “Lots of turkeys,” he stressed, knowing that, along with deer, they were what held my interest.

“They’re all over the place. You just wait until you start deer hunting out here—you’ll see,” he said, hoping to collect my check and fill the last available slot. It worked, and his word was good.

On my second morning out, while hunting from a tower stand situated at the intersection of two logging roads, I didn’t see any deer—but I did hear turkeys noisily plunging from their roosts deep in the pines. Like dark specters, they emerged from the shadows and began to congregate in a small food plot along the road until they numbered nearly 30 birds. Several huge longbeards were in the bunch.

Fast-forward to the following spring. With little time to scout, I managed to hit the property the afternoon before the opener and located one gobbler before fly-up. The next morning, however, things didn’t pan out. A hedge of briars blocked his approach to my calls, and the bird soon tired of my enticements and went the other way. Unsure of where to look next, I recalled several of the stands from which I had seen turkeys during deer season.

Sure, the flocks were scattered by this time of the year, but the turkeys had hung in those areas for a reason—good roost trees, open woods for safety and plenty of food nearby. It stood to reason that a gobbler or two would linger in each place. At the first spot I checked, I heard two toms, and within an hour one of them was riding home in my truck. I was on to something.

Make the Most of Your Time

Many hunters are stretched for time these days. As vital as scouting is, when the choice has to be made between using precious time off from work and away from family to scout or to hunt, hunting usually wins out. For that reason, it’s important to make the most of every visit to the woods. If you hunt turkeys and deer, you must maximize those days afield in your stand. Here are five tips to jump-start your spring while you work to fill your deer tag.

1) WATCH THE FIELDS when sitting a crop-side stand—particularly during bad weather, when birds will congregate to dry out and escape the noise and motion of dripping-wet woods. This is the best way to determine the local flock com-position. While gobblers tend to hang exclusively with other toms, and hens roam with their young-of-year birds, by late deer season, flocks are starting to bunch together as they prepare to sort out the pecking order.

Gobblers will split up as breeding begins, but you can bet there will still be several in the area when the season opens. Robert Abernethy, director of agency programs with the National Wild Turkey Federation, says that among the Eastern subspecies, turkeys rarely roam more than a mile away. If you hunt out West, though, where Merriams transition from wintering grounds to higher altitudes and can range as far as 50 miles, these observations will obviously be less reliable.

2) LISTEN FOR AND OBSERVE roosting turkeys as you’re deer hunting. The sturdy limbs that provide safety in the winter will do the same in the spring. Look for ridge-side oaks, for example, where birds can roost out of the wind, or for trees surrounded by water, where the tree can’t be approached unheard and unseen.

3) NOTE THE FOODS that deer are attracted to, since tur-keys eat many of the same ones. Remnant white oak acorns are a favorite of both species, as are waste grains in cut crop fields. Plots of clover and winter pea also are eaten by turkeys, and in the spring they’ll attract insects, which the birds relish. Note spots where small springs bubble up from the ground and creeks flow through bottoms; these places will be among the first to green up in the spring, attracting insects and ultimately turkeys to feed on both grass and bugs.

4) TAKE MENTAL INVENTORY of any changes in terrain or obstacles to bird movement as you walk to or from a stand or stalk for whitetails. That bunch of trees that was knocked over during a winter storm might obstruct a turkey you’re working to the gun in the spring. Knowing where these new obstacles are allows you to take them out of the equation before you set up on a gobbling tom.
Clear-cutting can also affect bird movement, particularly if food sources, such as oaks, have been hauled away. But timbered lands aren’t all gloom and doom. They can provide excellent bugging and strutting areas for spring turkeys in the first year or two.

5) KEEP TRAIL CAMERAS OUT THERE even after deer season. Relocate them from deer trails to small food plots, along logging roads and on bait sites (where legal) during the off-season to get an idea of where birds are moving about and how many of them there are. Ideally, you want to set the cameras a foot lower on a tree than you would for whitetails—roughly 2 to 3 feet off the ground—to give you a better turkey’s eye view.