Who Needs a Turkey Dog? Kill Fall Turkeys On Your Own 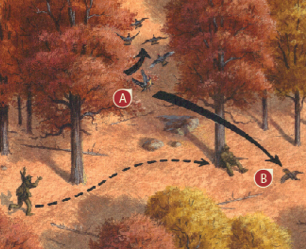 Subtlety Be Damned Early in the morning or after the birds have gone to roost is the best time to employ the flock-bust technique. It's important that the flock scatter in different directions rather than as a group [A]. Try to set up in between a single and a bigger group and wait for the lone bird to seek out the others [B].
SHARE

When Peter Costenbader’s turkey dog passed away 10 years ago, the retired real estate broker decided to try fall turkey hunting on his own. He didn’t kill many birds the first couple of years, he admits, but the more he tried, the better he got.

Look and Listen
“The first thing I learned is that you have to do a lot of walking,” he says.

Costenbader doesn’t hustle through the woods. Instead, he spends as much time listening and looking as he does moving. Turkeys are vocal in the fall, especially in the morning, so it pays to be in the woods at first light straining to hear a faint cluck or yelp. If he doesn’t hear anything, Costenbader will ease through the woods, calling occasionally and scanning the ground for scratchings, droppings and high-quality food such as acorns and beechnuts. When he locates an area with lots of fresh sign, he’ll slow down even more, calling and listening for a response.
**
Just Like Spring**
If he gets a reply, Costenbader will sit down and start calling just as he would in the spring, even if he’s calling to an entire flock. To up his chances, he’ll put out a hen and jake decoy within shotgun range and another jake decoy behind him.

“Usually a single or maybe a pair will come in, but I’ve called in whole flocks,” he says. “Decoys can mean the difference between getting a shot and not.”

If he’s working a flock and nothing comes in after 45 minutes, Costenbader will try to circle around the birds and set up on them again. If that doesn’t work, he’ll sneak out of the woods and return the next morning and get in the exact spot where he last heard the turkeys, taking care not to spook them as he walks through the woods.
**
Bust ‘Em**
Spooking them is exactly what Olathe, Kansas, excavating contractor Rod Pettit wants to do. He follows the basic tenet of fall turkey hunting: Bust up the flock and then call them back in. His favorite time to scatter birds is after they’ve gone to roost in the evening or early in the morning. He’ll walk under the roosted birds, shouting and waving his arms so they scatter. If they are already on the ground, Pettit will rush the flock shouting in order to get the birds to fly in different directions. The closer he can get before he makes his jump, the better the chances of scattering the birds.

Scatter or Scare?
There’s a notable difference between scattering a group of turkeys and merely scaring them. A flock that flies in the same direction is a lost cause; they’ll stay together as they flee. A scattered flock, however, is ideal.

“The more directions they go in, the better my chances of calling one in,” he says. “If a single peels off in a different direction, I’m going to get between the main flock and that single. Otherwise, I’m just going to get in the middle of the last place I saw them.”
**
Turkey Talk**
Once he scatters a flock, Pettit will wait 15 minutes before he starts calling, unless he hears a bird calling first. Both Pettit and Costenbader use simple calling techniques, often imitating the real birds they hear. Instead of randomly yelping and clucking to a vocal flock, Pettit will “have a conversation” with a single turkey.

“I pick out one bird and do the same thing it’s doing,” he explains, “but I never interrupt it. I let it finish calling, and then I’ll call back.”

Costenbader agrees with that approach, but if he doesn’t get a response, or if he’s blind-calling, he’ll try a set of fighting purr calls or even a gobble. Dominant jakes will often come in to investigate.

Targeting Toms
So will mature gobblers, which are considerably tougher to kill in the fall because they don’t have the urge to regroup after they’ve been scattered. Instead of relying on the standard kee-kee run of a young bird, Costenbader and Pettit use a deeper, coarser and slower series of yelps and clucks, calling far less frequently than if they were calling young birds. Pettit will sometimes bust up a group of gobblers, but it’s not as effective as scattering a group of hens and poults, he admits.

“It can be three hours or three days before toms get back together,” says Pettit. “You never know with mature gobblers.”

That constant uncertainty is exactly why Costenbader loves chasing turkeys in the fall, but he also loves it for another reason.

“I’m usually the only one out there,” he says. “I have the turkeys all to myself.”