This legendary turkey caller never takes himself too seriously. Missourian Ray Eye shot his first Ozarks gobbler more than 40 years ago, starting a love affair with wild turkeys that continues to play out on TV shows, in seminars and in his work as a pro-staffer for several outdoor-products companies. 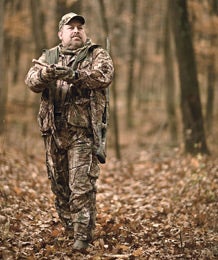 OL: Tell me about hunting your first gobbler.

EYE: I hunted in bib overalls with my granddad’s Winchester ’97 stuffed with low-brass paper squirrel loads. Back then, the old-timers felt that hunting spring gobblers was unfair because it took advantage of them during the breeding season. They figured the real challenge was hunting gobblers in the fall, and the more I do it, the more I agree with them.

EYE: We’ve played hidden recordings of bucks fighting for people who later swore they were covered up with deer but never saw them. I’ve dressed up like a clown and surprised guys when they climbed into a ground blind at four in the morning. There are times we hunters need to be serious. But this is supposed to be fun, and we just sort of enforce that rule.

EYE: I want to go back to Africa and hang out with the trackers. Those guys could track a poodle across a Wal-Mart parking lot after a week of rain. I want to get close–real close–to a buffalo.