Photos by Tom Martineau/The Raw Spirit When arctic weather has ponds and lakes locked up with ice, goose hunters have... 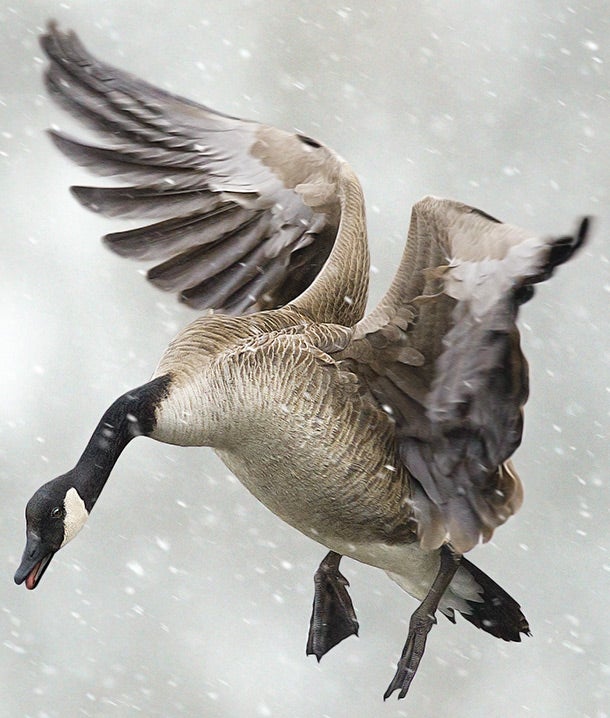 When arctic weather has ponds and lakes locked up with ice, goose hunters have two choices: picked-over agriculture fields (which are usually locked by leases) or rivers that run big and fast enough to keep from freezing over. That open water will attract honkers, but successfully hunting the fast-moving, bone-chilling water requires a different approach from field and lake tactics.

Honey Holes: Slackwater and Sandbars
After feeding, ducks and geese head to water for a drink and to rest. To conserve energy, waterfowl will look for slow-moving water with safe access to land. “When they’re full of beans or corn, they’re not going to want to fight the current,” says Mike Miller, a Mossy Oak pro staffer who grew up hunting the Susquehanna River and now lives in Colorado, where he stalks waterfowl on the the Arkansas River. “They’re going to find a pool or eddy to loaf in and then they’re going to move to calmer water or even the shoreline to rest.”

Backwater sloughs, oxbows, and the inside bend of a river are all places that will stay open during the late season but that have less current than the main river channel.

“Find a backwater–a bend in the river or a hole,” says Mario Friendly, a Zink Calls and Mossy Oak pro staffer who hunts Oregon’s Columbia River and its tributaries. “When you set up on the water near fields, the best action is later in the morning.”

According to both pros, sandbars might be the ultimate spot to ambush late-season geese. “I’ve had the most success hunting the tail end of a sandbar. That downriver side creates slackwater that is attractive to geese, and it gives you a place to dig in and hide your layout blinds, as well as put rester decoys on the shoreline,” says Miller.

Decoy spreads should mimic the natural activity of real birds, but plugging your landing hole with fakes will cause birds to land short or out of range.

“I’m always going to put decoys upwind of the boat or blind, and sometimes pretty far upwind,” says Friendly. “They’re not going to land right in the decoys. They’re going to land short and swim into them. Putting decoys 25 to 30 yards up in front of the landing hole will put the birds right in front of you.”

When winter’s coldest temperatures set in and the survival of ducks and geese depends on conserving energy, Miller moves more decoys to shore. “Use the same number of decoys, but increase the number of sleepers on the bank. Huddle them close together to give the appearanceof a good place to lie down, rest, and keep warm.”

Speak Softly: Calling Correctly
The third element that differentiates river hunting from a field approach is how you talk to circling birds. Both pros agree that an aggressive hail call to grab the attention of in-flight geese can be used, but that a more laid-back approach is the norm for idle birds on the water.

“The majority of the time, I’m not going to be as aggressive as when I’m field hunting and there’s a food source present,” says Friendly. “Usually the birds on the water are loafing and don’t want others to know they’re there, so tone it down way more on the water. Give them just enough to keep them interested and coming.”