Nine great tips for using last fall's sign to predict where bucks will move next season. 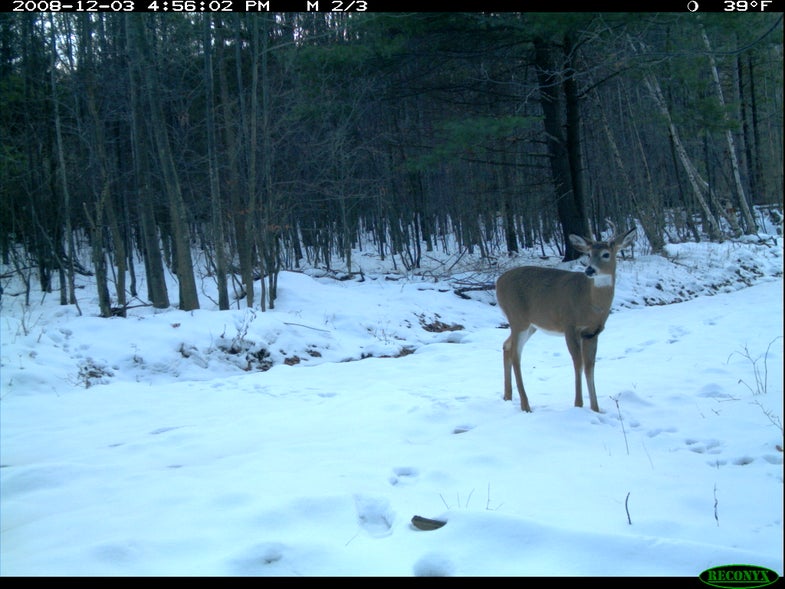 Keep monitoring trail cameras throughout the winter and spring in order to gain some helpful clues on deer movement.
SHARE

Don’t wait until the hot days of summer to begin scouting for next deer season. Get out there now. Go back to the woods where you just finished hunting and snoop around for a few days. Use the sign to figure out how and where bucks moved through the terrain according to cover, feed and winds. Chew on all that now and you’ll have a better idea of where to hang your stands for next season.

1. LOOK FOR RUB LINES: In some regions, bucks blaze away the bark on a wide variety of hard and soft trees prior to the rut. Any old bark will do for a good mauling. But in other areas, most notably in parts of the Midwest and Southeast, they show a definite preference for aromatic cedars and young pine trees. If most of the rubs you are finding in the area you hunt are on evergreens, this is probably the case.

2. CHECK BORDERS: As you hike, investigate every green patch or small stand of trees, especially those that border crop fields, acorn flats, grown-up clear-cuts and creeks. I bet you’ll find more rubs in those spots. This will tell you where a lot of bucks are likely to hang out and make new rubs this coming fall as seasons are about to open again.

3. SEEK OUT RUB PATTERNS: Look for a rub location pattern, too. Suppose you find twice as many scarred trees on the sides of ridges as you do high on the tops and down in the draws; your bucks like to side-hill, and not just when they’re rubbing. It likely reveals a travel routine that bucks follow from October through the late season. Work that information into your stand-hanging plan for next year. Setting up along these travel corridors will put you in an excellent position to tag that trophy you never saw this year.

4. FOLLOW SCRAPE LINES: In moderate climates and after the snowmelt in the North, old scrapes are visible into early spring. Try to find a scrape line on a ridge or in a creek bottom and follow it for a mile or two to get an idea of the type of terrain the buck moves through before and during the rut.

5. THINK LIKE A BUCK: Put yourself in a buck’s hooves. Scan the cold, gray woods up ahead and visualize how Mr. Big prowled on his mission for does and how the terrain looked to him. If you were a huge buck, you’d hug that brush line or cut around that point up ahead, right? He probably did the same, and he’ll likely do it again one day this November. Put a stand there.

6. FIND THE TRAIL CROSSINGS: Pay dirt is discovering where a heavy scrape line crossed a primary doe trail during the last rut. That trail, bare and muddy now in late winter, should be easy to see. At the intersection you’ll probably find more scrapes and rubs. If bedding thickets near food sources remain the same this fall as they were last year, you can bet does will run those same trails or tromp new ones nearby. Expect rut-crazed bucks to search for does at these intersections.

7. HOOF IT: Probably the best thing you can do when scouting the woods this time of year is to find and walk every deer trail on your property. The paths will lead you to the best food sources and bedding sites.

8. LOCATE BOTTLE-NECKS: As you hike, note how the trails hug brush, cut through low areas and curve around the corners of fences. All of these spots are great bottlenecks for bow stands in October. Mark these trails on a map or aerial photograph.

9. USE A MAP: When using trails, deer walk into headwinds or crosswinds whenever they can. Use an aerial map and a compass to visualize how they worked into the predominant wind–southwesterly to northerly in most places in fall and winter. Also, say you hike a trail that runs north and south between a food plot and a swamp, and you find a prime creek crossing. Check your compass and pick out a good tree on the east side of the trail to keep the morning sun behind you. Flag it. When you return in eight months you’ll know where to set up.