Hunting in the Heat

How to find deer and elk during unseasonably balmy November days 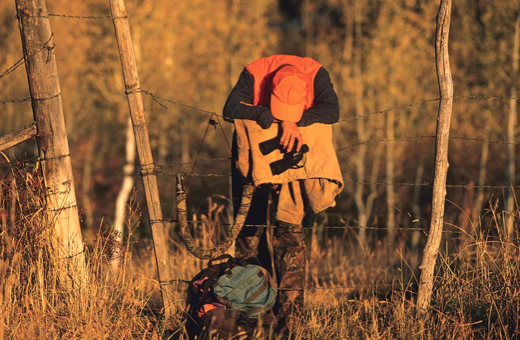 The day after Thanksgiving last year, as the clock ticked toward the end of Missouri’s rifle deer season, I flicked a sluggish mosquito off my arm, dabbed sweat from my forehead and wished for a lighter shirt.

The temperature was hovering around 75 degrees, and whitetails were as scarce as rubies. Most deer stayed in heavy cover all day, but stalking through the brittle oak leaves was as effective as driving a school bus through the woods. The best approach, waiting in a stand on the edge of a soybean field for twilight bucks to emerge from timber, reminded me of September bowhunting. Complete with biting insects.

If you’ve hunted the Midwest in the last couple of years, you’ve probably encountered the same record temperatures. Last November, the Mississippi Valley was about 11 degrees above normal, and the year before, deer hunters sweltered through temperatures that neared 80 degrees the week before Thanksgiving.

Whether you attribute it to greenhouse gases or geologic cycles, our weather is warming. This is most noticeable during transitional months, such as November, when we can either sweat through a prolonged Indian summer or hunker down under a fierce early-winter storm.

Hunting partners come and go, but weather is your constant companion in the field. When it’s good, weather is barely noticeable, quietly enhancing your hunting experience. But when it’s bad‚ or even abnormal‚ the weather can make or break a hunt, and that’s especially exasperating when you’re on a budget or a schedule.

As an Illinois whitetail guide, Ben Plattner is familiar with balmy Novembers. He says that even at the height of the rut, hot weather can turn deer into nocturnal ghosts. And it can turn experienced hunters into self-doubting reactionaries.

When people don’t see deer moving around during the rut, they wonder what they’re doing wrong, says Plattner, owner of Timberland Outfitters, located west of Springfield. Then the hunter starts moving around, scouting, trying to make things happen. That’s the worst thing you can do when deer are in their core areas. You generally push them out and off the property.

Everything in mid to late November hinges on doe movement, adds Plattner. When does don’t move, bucks don’t move. Sometimes you just have to wait them out. Being successful takes more patience when it’s warm.

WARM-WEATHER WAPITI
Warm weather has also frustrated hunters in the Rockies raised on the notion that they need deep snow and cold temperatures to kill elk. Wyoming outfitter Lynn Madsen admits that high-country elk are harder to hunt in shirtsleeve weather, but for the last few years he’s been adjusting to open winters by hunting different habitats and becoming more mobile.
Winter weather is valuable because it gets animals moving, he says. When you don’t have snow and cold, you have to move to the animals, and then you have to slow down and hunt smarter.

We adjust to warm weather by shedding layers, but elk are wearing heavy winter coats this month, and they head for shade to regulate their temperature.
We hunt the north-facing timber, wooded ridges that get the afternoon breeze and the bottoms of drainages that have springs or streams, adds another Wyoming outfitter, Justin Jarrett, out of Cody. Not everybody can hunt dense timber, but you have to when elk are holed up in cover. It’s a game of inches. You move, then watch and listen and smell, then move again

In both deer and elk country, it pays to take note of microhabitats that can appeal to ungulates when the landscape is dry. Look for patches of green vegetation, woody sloughs and hidden seeps, with standing crops adjacent to secure cover.

Deer love stagnant water, says Plattner. Focus on small farm ponds and set up between those water sources and bedding areas or timber where they’ll spend the day when it’s warm.

Even rutting deer will bed down in the heat of the day. But they’re active at first light, when they head back to the secure cover, and in the evening. In some of Plattner’s stands, there’s no way to reach or leave the stand undetected, so hunters face a long day on their butts when deer aren’t moving.

WHERE TO SET UP
In my case last November, I posted along well-used deer trails just inside the timber, and nearly always had does and smaller bucks within sight. Watch funnels, timber or brush that pinches to a point and focuses deer as they move from bedding to feeding areas. Scan brushy fence lines bordering neighboring property that might donate a deer to your area. And be ready to use decoys, estrous scents and rattling to get bucks to move on those warm-front days when you can’t wait for dusk.

Like whitetails, elk will bed down during the heat of the day and feed at night. When I’m pretty sure elk are in the area, but there’s no snow for tracking, I’ll spend the day slowly working toward remote meadows where I think elk will appear at dusk to feed. I’ll set up within range of where I expect them to emerge from the timber, paying strict attention to the wind and my profile, and wait for the sun to set and the elk to filter out of the cover.

Sometimes the wait is fruitless, and sometimes elk emerge after legal shooting light. But if you can back out undetected and return at dawn the next day, those are good places to kill elk.

CHANGE IS GOOD
And if your tactics fail and your patience flags, remember this truism of coffee shops and farm auctions: If you don’t like the weather, just wait and it’ll change. And when it does, expect fast action.

In the mountains, heavy snow will cue elk to herd up and stage at the head of migration corridors. Sustained winter weather will prompt them to move down drainages to lower elevations.

And in whitetail country, frosty weather sharpens libidos and dampens inhibitions of rutting deer. Suddenly, hidden bucks become visible. When we get a cold snap, the rut kicks into overdrive and deer come out of the woodwork, says Plattner. It’s worth the wait.