Get ready to rock when fired-up whitetails begin showing signs that the rut is kicking into high gear. 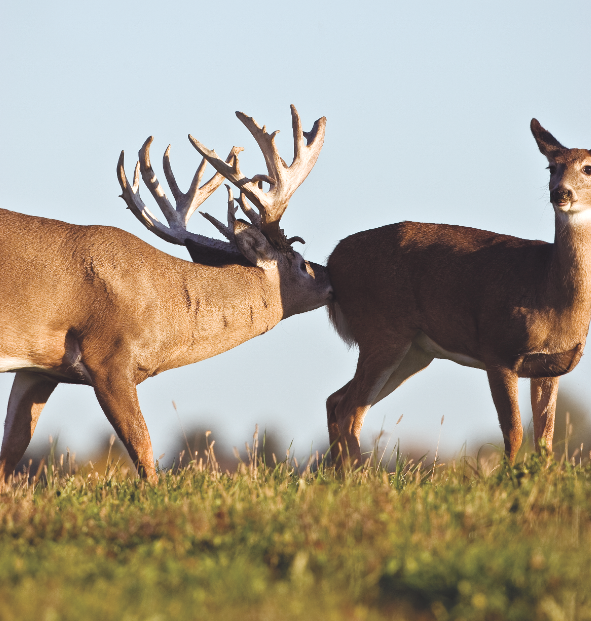 The two weeks before the peak of the rut are the best time to use aggressive calling tactics such as challenging grunts.
SHARE

The onset of the breeding period will definitely cause the big boys to break away from their strict nocturnal routines and protective sanctuaries. However, an increase in daytime rutting activity doesn’t necessarily mean that punching a tag is going to be easy. In fact, your ability to accurately read the rut and adjust to the different transitional periods can be the deciding factor in a successful hunt. Paying close attention to the following key signs and modifying your hunting strategies accordingly will enable you to decorate your wall with more long-tined giants this season.

It’s not uncommon for hunters to jump the gun and switch tactics after seeing some of the initial signs of the whitetail rut. During this transitional phase of the rut, you will probably see many young bucks hounding does that have not yet hit their estrous cycles. Basically, the does don’t want anything to do with the little guys, and they will frequently try to outrun and lose their inexperienced pursuers.

At this point of the rut, you should be able to find red-hot scrape lines and fresh rubs, but the big dogs will still not be ready to enter the chase just yet.

When hunting this transitional period, try setting up near active scrape lines or along the edges of big buck travel corridors that connect feeding and bedding areas. Veteran bucks know the ladies are still not willing to cooperate and therefore they will stick tight to a late pre-rut pattern. However, the dominant bruisers in your hunting area will be extremely territorial just before the peak of the rutting period.

This is the perfect time to hit bucks with aggressive calling tactics that consist of intense rattling, challenging grunts and snort-wheezes.

Utilizing territorial scents like intruder buck urine and tarsal glands near scrapes can also help trigger an irritable response from a massive-racked brawler. Lastly, adding a buck decoy to these strategies will increase your chances of coaxing a monster into range.

During the peak of the whitetail rut, you will immediately start to notice far less rubbing and scraping activity in locations that were smoking hot just a few days before. Mature does will even begin acting a little funny by exhibiting unusual mannerisms when they walk, frequently stopping to urinate, twisting their tails in strange positions and occasionally bleating. The younger basket-racks will suddenly disappear, and hunters will start observing a lot more daytime activity from the dominant bucks.

This is generally the time when you begin hearing about multiple big buck sightings from truck drivers, postal workers and daily commuters.

Now’s the time to completely abandon traditional set-ups overlooking scrape lines, buck travel corridors and bedding areas. Instead, focus all of your attention on the does and begin exploiting prime locations where the slick-heads spend most of their time. High-impact setups overlooking doe bedding areas and heavily worn trails that lead to current food sources can be deadly during this action-packed phase of the rut.

Try hitting lovesick bucks with a series of tending grunts and yearning estrous doe bleats near these key areas. Pulling drag rags soaked with hot estrous scent and strategically placing a doe decoy near your stand can also crank things up a notch or two.

Remember, don’t be afraid to switch stand locations and hunting techniques to meet the transitional phases of the rut. Your ability to monitor exactly what is going on around you in the woods during this period will ultimately be the difference between success and failure. In the end, accurately reading the rut and correctly matching your tactical strategies will allow you to take your hunting to a whole new level this season.

Prime Times for Hunting the Rut

A Dark Moon According to Harold Knight of Knight & Hale Game Calls, one of the best times to hit the woods is during the dark phase of the moon when the rut is running wild.

With more than 50 years of whitetail hunting experience, Knight believes that daytime rutting activity dramatically increases following the dark moon, and he has taken some of his best bucks during these periods.

moving fronts Sticking to your stand just before and immediately after a frontal period can generate some intense action.

Estrous does will often sneak off the bed to feed during these key times, and the big boys usually won’t be too far behind.

Midday Periods When the rut is peaking, it’s not uncommon for mature bucks to push estrous does during the middle of the day.

At this magical time, most other hunters are already out of the woods and the big boys will be on the move.

Adverse Weather Rainy, snowy and overcast conditions can be some of the best times to be in the woods during the rut. For good reason, whitetails will often move and feed when the weather takes a turn for the worse. Plus, fair-weather hunters will unintentionally jump and push deer when they abandon their stands.