The Gals Meet the Champ

Although he told many tales about the game he and others downed over the years, O'Connor's respect for his quarry was always evident in his work. Consider this excerpt from October 1946. 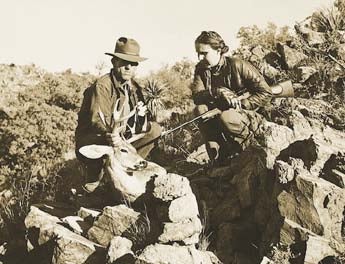 We called him the Champ because-well, he was the Champ: the shrewdest, foxiest, coolest, smartest whitetail buck that ever made a deer hunter wonder why he hadn’t stuck to golf. It would be trite to say that the old buck bore a charmed life; it would also be to some extent untrue. That buck’s life was charmed because he made it that way by being just a little cooler and smarter than the hunters who tried to “reduce him to possession,” as the language of the lawyers quaintly puts it.

For years he frisked, dozed, fed and begat his kind in a little range of hills which afforded little cover and almost no safe retreats. The Black Hills, as they are called locally, are a few miles north of the Mexican border, and from the highest ridge one can see the village of Patagonia, Ariz., located about three miles away, and the ranch house of our friends the Siebolds.

It seems incredible that the Champ was able to survive for years in a small area of relatively open country, yet he did. Frank Siebold hunted him every season for years, got in a few shots, but never hit him. His haunts were well known in the village of Patagonia, and if the Black Hills are well sprinkled with empty, corroding .30-30 cases it is because they were fired at the Champ by desperate hunters who shot even though he was out of range.

I got two cracks at him myself, when he was running swift and free through the oaks of a deep canyon 400 yards away.

The Champ was the most tantalizing deer I ever went after. Those who hunted him would hear rocks roll, look up to catch a glimpse of him; but he’d be gone before it was possible to shoot. He never bedded down where one jump wouldn’t put him out of sight. Other bucks might stop on a ridge a few feet from safety for one last look. But not the Champ! He simply scrammed, disappearing as if he possessed the magic secret of invisibility.

The more I hunted the Champ, and the more I heard about him from Frank Siebold and other hunters, the more convinced I became that one hunter going out alone would never get him. Unless somebody knocked him over soon, no one would, because the Champ was an old deer. He had first been noticed as an exceptionally big buck, with a head much larger than average, about six years before his death, and when he was finally killed he was probably 12 years old. In other words, for a whitetail deer he surely was no spring chicken!

In the 10 years from the time he became a legal buck until he met his end, he had scored technical K.O.’s over a lot of run-of-the-mill, fair, good and first-rate sportsmen. A lot of people knew where he lived, but they also realized that didn’t do much good.