O'Connor could transform the hunt for a trophy animal into an epic adventure. This tale of his quest for a giant buck appeared in July 1939. 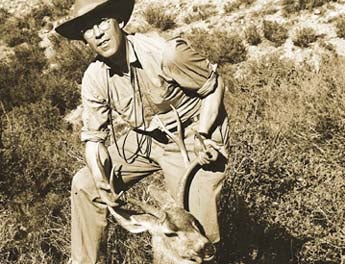 The story really starts a good many years ago. I was living in northern Arizona then, in the midst of as good mule-deer country as can be found in the United States. It was a case of being embarrassed by riches, since there were so many hunting spots that I could never get around to all of them. Some were famous all over Arizona. Others, just as good, were celebrated only locally.

One of these is the Slate Mountain section, an area of high volcanic peaks, cinder cones, wide parks knee-high with rich yellow gramma grass. Almost from the first, I was aware of Slate Mountain’s local fame as buck country, but I always got a buck somewhere else before I got around to hunting there. It took some plain and fancy stories to draw me in there-and I got them. Through all these stories, an account of one particular big buck ran like a theme song. A hunter who had seen him in gray dawn thought for a moment that he was an elk and did not shoot until too late. Others had grown so excited at a glimpse of him that buck fever made their bullets go wild.

The upshot was that I decided to investigate the section where this big buck ran. It was the first day of the 1933 season. I saw lots of deer sign and some deer, mostly does and fawns and a few small bucks. To the north, over tawny grasslands spotted with purple patches of juniper, I could see the scarlet gash of the Grand Canyon outlined with the blue of the famous Kaibab. To the northeast lay the pink and mauve and yellow emptiness of the Painted Desert.

Dusk was gathering when I started down the mountain. I built a fire on the lee side of a dead pine, made myself a bed of pine needles and caught some sleep. When the first gray of dawn came, I picked up my rifle and went back to the car. I was hungry and thirsty, so I opened an iron ration and took a drink from the canteen.

Then I looked up and there was the biggest buck I’d ever seen. He looked as big as a horse, and his antlers were so enormous that they showed plainly in spite of the fact that he was more than 200 yards away and in the gloom of timber. I dived for my rifle, but the buck disappeared just as I threw off the safety. I spent an hour trying to find him, but his big tracks showed that he was long gone.

Fate moved me 300 miles away into southern Arizona the next year, but I still remembered that great patriarch I’d left behind. So the end of the season found me once more in the Slate Mountain country. With me were two University of Arizona professors, Waldo Waltz and Neil Houghton. Our guide and horse wrangler was Slim, a local vaquero and an old friend.

During the morning it clouded up and rained a little. For several minutes we sat on the edge of a canyon, smoked cigarettes and cursed the weather, the deer and our luck. I stood up, ground my cigarette under my heel and prepared to mount. Then, almost 300 yards away, down toward the bottom of the canyon, I saw something move; something that became a great buck going out from behind a cedar in long downhill bounds. I got off my first shot before the others saw him. It was a miss, behind and below. My second kicked up dust just over his back and my third rolled him in foot-high sage. He was an enormous buck, no doubt of it. But the longer I looked at that buck the surer I was that he was not the patriarch. His teeth showed him to be fully mature but not old, in spite of the record-class head he carried. I still am proud of that head, as it is one of the three or four largest that I have ever taken, but I am now certain that on that red-letter day back in 1934 I didn’t get the patriarch. For I saw him again last year, and that is when this story properly ends.

My wife and I were returning from the Kaibab with two bucks when we saw a truck turning into the highway from the direction of Slate Mountain. In it were two bucks and one of them was the biggest I have ever seen deead. I signaled for the driver to stop.

“You surely have a big buck there! Where did you get him?” I asked, knowing the answer before I heard it.

That, I am convinced, was the end of the Slate Mountain patriarch. I still regret that I didn’t measure that head on the spot, as I had a tape with me. My guess is that it would have shown a spread of close to 45 inches and a main beam of 32 or 33 inches.

It is too bad that the old fellow could not have fallen to a head-hunter, so those antlers of his could have been mounted. Yet he has achieved immortality of a sort, as he’ll long live in the hunters’ tales of northern Arizona. On top of that, he helped to populate the Slate Mountain country with a truly magnificent breed of bucks, and generations of his descendants will range there, I hope, forever.