From Maine to the Carolinas, fishermen flock to the coast to catch the fall blitz of ravenous fish heading south for witner. 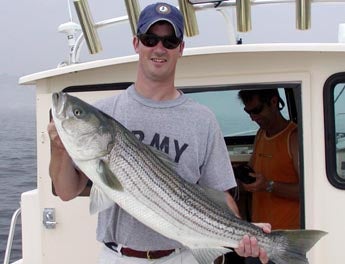 The dawning sun blinks through swaths of fog like a dragon’s red eye. Jumping out of the 4×4 truck before it stops, we grab rods and run in chest waders that make us look like waddling turkeys. Down the beach we go, heading for where the gulls and terns have tightened their airborne circle. The dragon’s eye winks open and stays this time, backlighting the shine of fleeing minnows and the heads of striped bass that bubble up on the surface and then are gone. The birds are dropping from above now, screaming. We can hear their hungry cries over the gentle sigh of surf, the ripping, rattling sound like hail on glass. It’s the sound of carnage coming closer, as silvery baitfish leap like a thousand miniature missiles.

Hooking up is the name of the game; the fish won’t stay. All we hope is that the bite will last so long our hands will become rasped, punctured, cut and slimed, and our muscles will get shaky and wobbly from the strain and adrenaline overdose.

Different Fish, Same Game
This is the autumn blitz along the Atlantic coast. We’re fishing on a beach located between southern Maine and Massachusetts’ Cape Ann, or around Cape Cod and its islands to Narragansett Bay, or perhaps in the rips from Connecticut out to New York’s Montauk Point. We might be running the Jersey shore and the Chesapeake Bay or finally North Carolina’s Outer Banks all the way to Cape Lookout. We follow the fish south.

The migrating stripers are headed for the Carolina coast, where they make their winter home, but the autumn blitz is composed of more species than bass. When we pitch a bait into the water now, it might be met by a bluefish or a false albacore. If we’re very lucky, a smallish bluefin tuna could show up. Anything is possible during the fall run, which is why we’re here.

The autumn coastal blitz actually starts some time in August. Depending on the weather, it can last until early December in the mid-Atlantic states, and through January down South. It is the time when bay anchovies, baby menhaden, herring and silversides flush from estuaries and seek sanctuary in the wide ocean. Some of them find it, but millions find nothing more than the vacuuming mouths of migrating game fish. The baitfish run their gauntlet and so do their predators. Fishermen wait for their feast, too.

Talk of autumn surf-fishing generates an image of an angler in chest waders catapulting a giant plug 100 yards offshore with an 11-foot-long surf rod. That’s part of the story of the fall blitz, but not all of it. Just as many stories tell of fishermen heaving eels from a bouncing boat along an inlet’s shoals, riding a roller coaster of buffeting tides and winds. Other tales tell of fishing the hook at Cape Lookout in November. Locales change, but the common element is that you catch fish until you’re so weary you can barely stand, and then you catch a few more.

[pagebreak] Flyfishing is a bit of a balancing act, but that only heightens the fun. Half the time you perch in the boat’s bow and try to outguess the wind and swells. When it’s truly bad you jam your shins into the gunwale edges to keep from falling over. Between the gusts and rogue waves that play havoc with back casts, you somehow manage to get a streamer into the water.

It helps to apprentice with somebody who knows what he’s doing. One of my autumn mentors is Paul Dixon, whose shared skill and knowledge propelled our light tackle and flyfishing a quantum leap forward at what they call The End, Long Island’s terminus at Montauk Point.

Montauk Madness
Here is a montauk day during the fall blitz: We are cresting waves in Dixon’s center console and I’m standing with mouth agape as we pass schools of fding albies. Ahead, swells heave toward a beach where a line of anglers, invisible from the chest down, fling lures into the surf. Other fishermen in wet suits are perched on the rocks of a jetty and glisten like sunning sea lions. Most of the fishermen are straining against thrashing bluefish. Suddenly the waders are backing up quickly. The blues have charged in where moments before the men were standing. Birds sound the alarm over the hissing surf.

Our motor is in neutral and we rise on the swells as we drift toward shore. Dixon flashes a grin. I protest; we’re not rigged with wire for the bluefish.

“No, not the blues. Get up to the bow and look,” Dixon orders. I see what he’s seen: a school of stripers herding an enormous clot of rust-colored bay anchovies and rolling among them occasionally to gulp down mouthfuls. Bluefish are on the perimeter, picking off minnow stragglers. The surface is ripped to froth as the bass continue to roll up on the bait and gorge. I can see their eyes. The tension is incredible. “Now!” Dixon yells.

[pagebreak] I hook up instantly, then settle down for a long pull. My friend Charlie hooks up. A few yards off, a wave crests the transom of a boat that holds two men and a black Lab. Their tackle awash, the anglers begin to bail. A bluefish in their livewell flips out and swims upstream in the flooded cockpit. The dog barks madly as the men curse and dip water. I lean back against the striper that is still charging away from us. Surreal. The men finally get most of the water out of the boat, and the bluefish is recaptured. They grab rods and cast. They hook up. So do we, again and again. And then the bass are gone.

** Just One More**
We are out in deeper water now, changed from Clousers to epoxy flies. The little tunnies were waiting. They surround us. We cast down and across current, strip twice and then set the hook. Here is none of the head thumping of bluefish or dogged runs of bass. With Albert, as false albacore are nicknamed, every inch of fly line on deck instantly vanishes. You maintain pressure with the rod to end the fight as quickly as possible, knowing that if you don’t Albert will just circle out of reach until the lactic acid frothing through his body reaches a lethal level. You want to catch him, harness his energy for a time, but not kill him.

The water surface looks as if a hundred food blenders have spewed their contents all at once. We cast into blood slicks and trashed bait. The albies we boat spit anchovies. The blues go for our fingers, and the big stripers whap us with their tails or punch fin holes in our hands. The wind slams lead-eye flies into our heads and fly line cuts our fingers. And we love it all.

By the time the frenzy ends, no one remembers how many fish we’ve caught. We’ve drifted beneath the lighthouse. I lick my lips and taste salt, though whether from my own sweat or the spray, I can’t tell. A moment’s rest. Then there is a strange sound, the hiss that heavy wet snow makes when it hits water. In the shadows of the sheer cliffs we see bass coming. As they get closer the sound changes to that of hard pelting rain, and Dixon yells. The school splits around the boat and some of the fish are knocking into it, drumming down the fiberglass hull. This is too much. I flub my cast but recover quickly and the streamer lands somewhere out of sight behind a swell. Instantly I hook up, but almost as quickly as the rod jerks down, it springs back up. I look at Dixon and he winces.

[pagebreak] “Bluefish,” Dixon sighs, and digs out another fly.

I locate a short wire tippet as Dixon looks sadly at the departing bass. In moments I bring in a blue. “Slam,” Dixon says. “Three species, one day.” And then Charlie slams.

The three of us look at one another. Our hands are red and slimy. The streaks of fish blood on our faces look like war paint. We are laughing like fools, but we don’t have time for jubilation. The stripers come again. We clip off wire, retie and cast once more into the churning maelstrom of bait.

“Slam again,” Dixon says after we release two more bass almost simultaneously. Then, as we round the point, I see spurting water. Albies are everywhere.

Dixon looks longingly at the departing bass. “You know, we really should have started in a while ago.”

“But, ALBIES!” I shout euphorically.

Shrieking birds wheel over the albacore and mark their line of travel. A tiny shower of bait blows from the water, signalling the beginning of the assault. The fish close fast, and the splashing of their feeding seems even fiercer than before.

Just one more, indeed. limy. The streaks of fish blood on our faces look like war paint. We are laughing like fools, but we don’t have time for jubilation. The stripers come again. We clip off wire, retie and cast once more into the churning maelstrom of bait.

“Slam again,” Dixon says after we release two more bass almost simultaneously. Then, as we round the point, I see spurting water. Albies are everywhere.

Dixon looks longingly at the departing bass. “You know, we really should have started in a while ago.”

“But, ALBIES!” I shout euphorically.

Shrieking birds wheel over the albacore and mark their line of travel. A tiny shower of bait blows from the water, signalling the beginning of the assault. The fish close fast, and the splashing of their feeding seems even fiercer than before.