Hunters have pursued the legendary Albia whitetail for years. 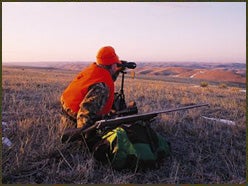 Late last September a 15-year-old Iowa boy pulled the trigger on his muzzleloader and killed what might be the largest non-typical whitetail buck ever to fall to a hunter. The buck, tagged by Tony Lovstuen, is believed to be the legendary “Iowa Walking World Record,” a deer that gained fame after images of its massive rack were captured on videotape and in photos. For many years the buck outwitted dozens of hunters who stalked him across the rolling hills of timber and farmland and through the river bottoms where he lived in the southern part of the state near the town of Albia. With each passing season his legend grew. But his reign as the monarch of Monroe County might have ended September 29 during a special youth-only hunt when Lovstuen lined up a humongous buck in his muzzleloader’s sights.

A pair of judges from the Boone and Crockett Club examined the rack in October and gave it a green score of 3224/8 inches, placing it well above the current 2956/8-inch B&C; record for a hunter-killed non-typical whitetail. A second scoring session was scheduled for November 30 (after this issue went to press), in order to remeasure the rack after the mandatory 60-day drying period had passed. Although it is common for racks to score somewhat lower after drying, Dale Ream, one of the B&C; measurers who examined the rack in October, was confident its record-book status would hold up.

“It’s an amazing rack and we had some interesting calls to make while measuring it,” Ream says. “But even with some of the question marks it will still score 315-plus. It’s going to be the largest hunter-taken non-typical no matter how you do it.”

According to Ream, he and fellow measurer Randy McPherren spent 4½ hours poring over the rack to tally their score. All told, the buck sports 38 scorable points (21 on the right main beam, 17 on the left) and has an inside spread of 224/8 inches and main beam lengths of 264/8 inches (right side) and 233/8 inches (left). One of the biggest challenges during the scoring process, according to Ream, was obtaining accurate antler circumferences, especially on the left antler beam. “His left side has a conglomeration of points like nothing I’ve ever seen,” Ream says. “The points are just stacked in there.”

Is There Another?
Every time a record-caliber deer is killed, controversy and intrigue seem to swirl around the event like smoke from a muzzleloader. While no serious questions have been raised about the legitimacy of Lovstuen’s buck, plenty of rumors have circulated that perhaps this buck isn’t the actual-or, maybe more accurately, the only-Albia buck. Sheds recovered from the deer pictured at the beginning of this article are distinct enough from Lovstuen’s rack that some question whether the buck’s twin brother (or cousin or uncle) still roams Albia’s farmlands and woods.

Adding to the sense of mystery, Lovstuen and his father, Doug, have been tight-lipped concerning specifics of the hunt and have not yet released photos of the trophy to the press. “Is it the same buck? That’s hard to say,” Ream notes. “You could do a DNA test on the sheds-there are two big sets out there-to find out for sure.” But as far as Doug Lovstuen is concerned, the whitetail killed by his son is the one and only Albia buck. “Trust me, it’s cold here and the deer are moving. If I thought there was another buck like that out there, I would be hunting for it right now,” he says. “I’m certain it’s the one.”

He should know, since not only was he at his son’s side when Tony shot it (Iowa law requires that youth hunters be accompanied by an adult), but he had seen and hunted the buck himself on many other occasions. In fact, if during one of those hunts his aim had been a bit better, he would have claimed the Albia buck himself.

Two years ago, according to Doug, he shot at and knocked down the Albia buck but was never able to recover it. RReam says Doug related this story to him as well during the measuring session in October. “Can you imagine?” Ream says. “I’m sure he had some sleepless nights.”

Having his missed chance redeemed by his son-who happened to be hunting in exactly the same spot where Doug had shot at the famous deer two years earlier-is a twist worthy of a made-for- TV movie. But with the original Albia buck potentially still out there-Doug Lovstuen’s assertions to the contrary-maybe the other hunters in Monroe County are already thinking about the sequel.