Buster is a springer spaniel trained to sniff out weapons caches instead of woodcock. 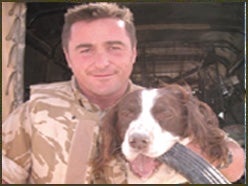 Not only are a large number of sportsmen among those who have put themselves in harm’s way in Iraq and other hot spots in the fight against global terror, but as this image shows, some of our best companions are at risk too. In a perfect world, springer spaniels like Buster would have to worry only about flushing woodcock, but as a member of the British Army, it’s his job to sniff out caches of explosives. During the war in Iraq, Buster uncovered a hidden store of AK-47s, grenades, ammo and bombmaking equipment that led to the arrest of 16 supporters of Saddam Hussein-who had denied that they possessed any weapons. Sergeant Danny Morgan, who is Buster’s handler, told the British newspaper The Sun that his five-year-old daughter misses the dog more than she misses him. “She was upset when I went off to war but wept buckets when she was saying goodbye to Buster. She’s been sending him more treats than she’s been sending to me since we arrived,” he said.