A Member of the “Big Six” 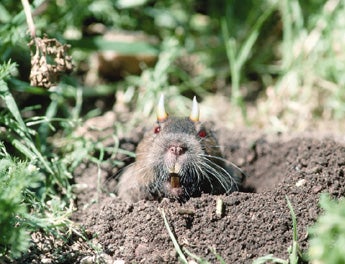 Consider this an apology to the readers of Outdoor Life. For most of the magazine’s history, we have taglined the publication the “sportsman’s authority.”

But we’ve discovered a dreadful mistake. For over a century we classified the gopher as a varmint and suggested using calibers such as the .22 LR when hunting them. James Nelson, a 240-pound man, would likely consider the gopher to be dangerous game. He fought with one that had attacked his dogs and his daughter in his backyard before it turned on him. Nelson kicked the gopher repeatedly and beat it with a shovel, but the rodent kept charging, knocking the man down twice.

“The thing was bionic,” Nelson told the Associated Press. “It kept going like it was on a mission.”

A police officer arrived and shot at the gopher. It shrugged off the slugs and lumbered into the woods. They never found it. Our new recommended caliber is the .375 H&H.; Be safe: Use enough gun.