The Texas Coast is a hot spot for specks and reds. 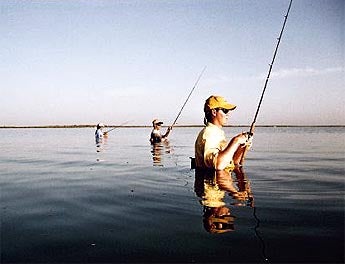 I learned something about myself last June in Texas’s Lower Laguna Madre. I can walk on water.

My guide, Capt. Charlie Farrell, had anchored his skiff at the mouth of a small cut off the larger East Cut that connects the Laguna Madre with the Gulf of Mexico, and we were wading our way back to it while casting for redfish and speckled sea trout. This being the third and final day of our trip, I had become well-accustomed to shuffling my feet as I walked to scare off any stingrays that might be lying in wait in my path. But had I become too accustomed to this practice? Was I getting sloppy with my shuffling?

It was then that I glanced down through the water to the soft sand bottom just 4 feet below the surface and caught a glimpse of what I had been fearing most: the flutter of a black wing. In that split second I somehow managed to levitate to the water’s surface, spin around 180 degrees, let out a blood-curdling scream and take two or three actual steps across the top of the water…before falling face-first and dropping to the bottom. I was up again in a heartbeat, but by then it had occurred to me that I wasn’t hurt. I hadn’t been stung. Surely if what I saw was a stingray, its poisonous tail would have found my lower leg and the water around me would have been slowly turning crimson. What I saw was nothing but a stinking flounder.

Charlie’s boat was just a few yards from where I had my “incident,” so I gathered my tackle and the shattered bits of my pride and shuffled back to the skiff.

Watch Your Step
We had been warned about the stingrays earlier in the week when we arrived at Bruce and Shirley Shuler’s Get-A-Way Adventures Lodge in Port Mansfield. In addition to the shuffling, they also suggested we probe the bottom with our rod tips before hopping from a boat into the water. We wouldn’t have to worry too much about the sharks, they said, since they are more of a problem earlier in the year-though they have occasionally been seen in June. Then there was the matter of keeping an eye toward the horizon for barges traveling along the Intracoastal Waterway. Apparently the wake created by a barge traveling through the channel is accompanied by the kind of pull associated with undertow. While most of the Laguna Madre is no deeper than 5 feet (the local motto is “If you fall out of the boat, just stand up”), the ICW channel is quite deep… deep enough to drown in, to be sure. There’s also a nasty current to help pull you under.

Once you get over the various perils that accompany a wade-fishing adventure in this part of the world, the fishing itself is quite remarkable. At times a group of us, lined up four or five across about 20 yards apart, would catch 20-inch-plus speckled sea trout nearly every other cast. Redfish came less frequently, though with much more of a fight. Grubs, jigs and bucktails were the lures of choice. A few reds that pushed 35 inches had shoulders like Shaquille O’Neal. Oh, and there were a few flounder around, too.