Faces in the Field: Off to a Quick Start 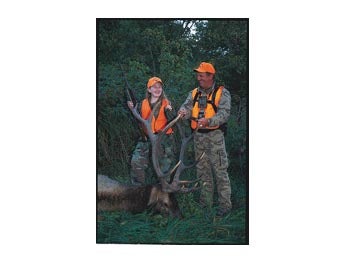 Stephanie Gavin won the lottery. Not the kind that pays out millions of dollars, but one, some hunters might argue, that offers a prize just as fantastic. The Butler, Ky., girl won a limited-entry tag to hunt a bull elk among her home state’s budding wapiti population. At 11 years old, Gavin became the youngest hunter to participate in Kentucky’s bull elk quota hunts.

One of 13 hunters taking part in the hunt, Gavin proved her mettle in the field on the first day by tagging an elk within points of last year’s state record. The 6×8 bull was shot on Oct. 2 at the Bagley Wildlife Management Area in Bell County with a Savage .30/06 bolt-action rifle belonging to Gavin’s father. It unofficially scored 3106/8 on the Boone and Crockett scale.

Don Wackerman, a guide from Jackson Hole, Wyo., who was hired by the Gavin family to aid in the hunt, called in the elk. Stephanie took the bull on the first shot at 20 yards.

Adding to the pressure of the hunt, the young Gavin had a gallery of onlookers made up of her dad, Anthony Gavin; Tim Farmer, anchorman for the Kentucky Afield television program, who was filming the hunt; and Philippe Roca, a photographer from Lexington, Ky., who was shooting pictures of the event.

Gavin is beginning to get used to media attention. Lately she’s been in newspapers and on TV. She even had a chance to meet Kentucky’s Governor, Ernie Fletcher. She was also featured recently in a deer-hunting magazine for a 13-point buck she shot on the first day of deer season last year. The buck was her first deer. Still, she says, “Elk hunting is my favorite now that I’ve shot an elk and I know what it’s like.”