Faces in the Field 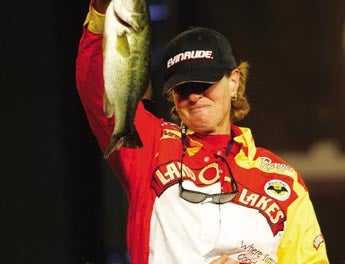 Seven years ago Judy Israel had never even heard of a largemouth bass. Now the Bronx native and grandmother of two has secured her place in bass-fishing history. In February, Israel became the first woman to win a top-level bass tournament when she took first-place co-angler honors at a Wal-Mart FLW tour event.

She did it using what she describes as hands-down her weakest angling technique, flipping. While pre-fishing Atchafalaya Basin near Morgan City, La., Israel was coming up empty-until she started using the unfamiliar casting technique. After nabbing a few bass during practice, she realized that flipping was the only way to go for the tournament.

“I said to myself, ‘Just flip it, girl. It’s the only way you’ll catch any fish,'” she recalls. The Land O’ Lakes-sponsored angler did well enough during the first two days to advance to the final round, in which she boated three bass weighing a total of 6 pounds 9 ounces to win the $20,000 purse-just in time to help pay for her new Ranger boat. Second place went to a Mississippi angler who produced a two-fish stringer weighing 3 pounds 13 ounces.

Israel’s introduction to bass fishing, and the tour, began when she and her husband moved to their current Clewiston, Fla., home in 1997. “The first tournament check really hooked me,” says the now hard-core fishing addict. “I’m just so in love with bass fishing.”