The going might be a bit slow in South Dakota's clay bluffs, but the trophy muleys there are well worth the effort. 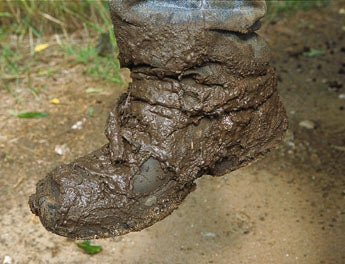 You’ve heard of the old saying “one step forward and two steps back.” I was living it while hunting mule deer in central South Dakota’s gumbo bluffs. And it wasn’t two steps back; it was more like a 10-foot slide, with uncanny similarities to Michael Douglas’s slippery plunge down the jungle slope in the movie Romancing the Stone. Unfortunately, whenever my feet disappeared from beneath me, I didn’t land in Kathleen Turner’s lap.

Instead, I was lucky if my knees, butt and groin escaped impalement on the overabundant prickly pear cacti and spiky yuccas. Skidding to a greasy halt, I would check my rifle for mud obstructions and continue my trudge toward a distant mule-deer sighting.

The rain responsible for the slick surface started the day before the rifle season in the western half of the state and continued, on and off, for a full week. People weren’t building arks yet, but they weren’t accessing the clay hills via pickup trucks, either. That meant many were staying home. Much of the West consists of clay-packed soil that when mixed with water takes on the consistency of nasal fluids associated with a severe head cold.

At first, I joined in the cursing of the rain, not being able to use my truck to access distant pastures to look for bucks.

Instead of tracking muleys, I focused on a river bottom in search of a resourceful whitetail that had eluded me the previous season. With only a short hike to and from the tree stand, my legs were saved the arduous labor of trying to maneuver through the quagmire.

Several years ago I was whitetail hunting with my friend, outfitter Mike Moody, along South Dakota’s Missouri River breaks on a wet and gloomy day. Gumbo slowed our stalk and we stopped every 20 steps or so to dislodge the goop with a hearty kick. One time, though, Moody kicked a bit too hard and the sole of his left boot sailed away with the gumbo glob, leaving his sock to meet the soil. His afternoon hunt was over.

Living With Gumbo
Between rain showers, I glassed the adjacent river breaks for muleys within stalking distance. As I sat there a silence overtook the landscape. Then it hit home-there were no trucks cruising the highland pastures. Gumbo and landowner demands had put a hold on the grassland cruising, which also meant the prairie muleys were receiving little or no pressure.

After five days of sighting nothing but small whitetails in the damp woods, the truckless river breaks began to look inviting. Besides, during a September pronghorn hunt I spied two massive muleys in an area only minutes from where I was at the time.

[pagebreak] Once I left my truck on the county road, there’d be no going back for missed items, so I jammed my frame pack with rain gear, snacks and, most important, a spotting scope. Around my neck hung a 10X binocular for initial long-range glassing, but the spotting scope would offer the final judgment on whether the mission was a “go” or a “no go.” The plan was to stalk to high points, crouch and peer over the rim to scan distant prairie basins.

An hour into the slogging hunt, two shapes popped up on a distant ridge. My binocular clearly defined one of the forms as a good muley that looked exceptionally wide and heavy. Jerking the spotting scope from my pack, I plopped it onto the soft landscape and scrambled to focus on the pair. It was too late. Before the focus dial sharpened the image, both animals dropped back into a deep basin.

Cursing to myself, I made a mile-long hike through steep, wet, slippery country to get another look at the buck. I made like Michael Douglas down the first slope and, not surprisingly, the ascent up the next hill was excruciatingly long. I picked my footholds carefully to avoid constantly backsliding down the hill. One hour and 200 pounds of chucked gumbo later, I reached the knob from where the two deer disappeared. I doubted the pair would be home, considering the rut was in hyperdrive, but I slipped off my pack and eased over the lip to appease my mud-tainted curiosity.

Less than 100 yards below me stood a fork-horned muley staring at something in the back of the bowl. Edging farther over the lip, I spied the duo. A large prairie buck stood guard over a doe exhibiting a willing attitude. The buck’s rack was super-wide, heavy and characterized by a large knob on the left side. Without hesitation, I steadied my Remington 7mm Magnum on the bigger buck’s side and put an end to the muddy marathon. Then I dropped to my butt and skidded down to him.

Although there wasn’t ground shrinkage, there was some mud shrinkage. The large knob turned out to be a baseball-sized mud gob stuck to one of the buck’s antlers. But even without the mud ball, the rack was super-sized.

An 80-pound pack and two miles of gumbo slogging couldn’t dampen my enthusiasm. I’ll admit, though, I wouldn’t have minded having a Kathleen Turner-padded landing a few times on the way back. Still, the cacti, yuccas and even the gumbo added to the memories of a perfect prairie adventure.