How one man triumphed over one of Africa's most dangerous animals. 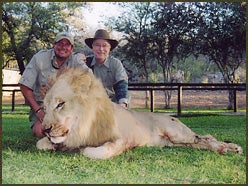 It had been nine hours since we cut his spoor about a mile from Rudyard Kipling’s “great green greasy Limpopo River”-nine hours of being down a run in the bottom of the ninth in Game 7 of the Series; nine hours of trying to sink a six-footer to win The Masters; nine hours of ‘fourth and goal’ for the Super Bowl win. There was a difference, though. One misstep here and we faced death so horrid none of us dared mention it, for being torn apart by a lion is surely not the way I cared to go. They say that once you feel the red earth of Africa beneath your boots, you are destined to return and that has certainly been true for me. During my first two Safaris in Africa, I had taken a Cape buffalo, impala, wildebeest, reedbuck, blesbok, and gemsbok. This trip, though, would be different, beginning with an introduction to lion expert Jaco Scott of Scottco Safaris and Mopane Ranch. Mopane is situated in the Northern Province on the border of Zim. The hunting report encouraged us from the moment we arrived at camp.

While settling in at the fire circle with my hunting partner, Ted Rowe, a report from landowner Peter Slabert informed us that a big male cat was active on baits set up along the Limpopo. We dared not linger at the campfire that night. I awoke at 3:30 with a knot in my stomach and a smile on my face. We hopped in the land cruiser and drove the 40 minutes to the concession.

Jaco and Verner took lead following spoor through mile after mile of lion-hiding scrub so thick that the mind easily imagined eyes glaring from shadows and claws grabbing from thorns. But it was not the proper time to linger on such things. The lion, with a belly full of bait, was angry and becoming angrier as our ceaseless tracking prevented him from digesting his fill in the midday sun.

We tracked him slowly, our trackers spread out with eyes peeled as we crept through the brush with our safety off and a thumping in our chests. The wind was swirling and he winded us as we got close. Several times we got 50 yards or so close to him and he would bounce from his bed and “bugger off.” It was some of the tensest moments of my life-we knew he was close and he might be behind any of the thick Mopane bushes directly in front of us. He knew we were on him and we continued to push him and push him all day yet he somehow managed to stay one step ahead of us. Several times I caught fleeting glimpses of his trail as he moved ahead of us. He was smart and angry as we kept him from bedding down. At least three times he crossed our spoor and was circling behind us! Our plan was to keep pushing him until he either made a mistake and gave us a shot or got mad enough to charge.

By 2:30 in the afternoon, we were close and he knew it. As we crept along his spoor, I stood peering into one of countless thick scrub trees. I heard a rustle and then the loudest blood-curling, spine-tingling, soul-moving, ROAR! There he was three feet from me on the other side of the bush. Though I could not see him I could hear him run off. My professional hunter’s Jaco and Verner started screaming “He’s running, let’s go follow him”. So there we were running full speed after a lion! We ran full sprint for 1/2-mile and when he turned right into an open stretch of sand, I dropped to one knee and fired-dooof-dust flew under him as I missed. I took a breath, steadied myself and fired again. This time, the 400 gr. safari grade Remington Soft Point hit with a thud. I knew I hit him right away-a clean shot through the lungs. He trotted 30 yards and bedded down in the thickest thorn bush I have ever seen. We had been going for nine hours straight and the last thing we wanted was for him to make it back to the heavy brush wounded, so we ran to the thorn bush reloading as we ran. As Jaco, Verner, Martis and I looked in from 10 feet away we could just make out his outline in the bush. We knew he was still alive as all we heard was a low guttural bbreathing and we knew he could still come for us. We could not tell which way he was facing so I fired one into him and all hell broke loose as he roared and started turning around. Jaco, Verner and I all fired and all hit him and that was that. The bush was so thick the trackers had to cut it down with machetes to get him out. What a hunt, what a trophy, what a day! Next year it’s leopard. Like I said Africa is in my blood-only 298 days until I return!