THIRD PLACE-Lost in the southwest Virginia woods, two friends are looking for a prize coon hound. This story has all the elements of a classic Outdoor Life tale. 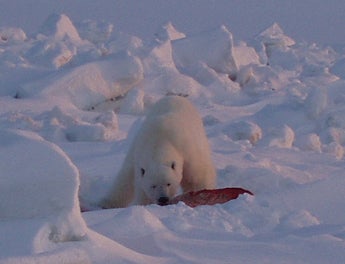 See photos from the winning adventure

Our boots slid through the mud as we struggled to climb up the embankment. The beams of our flashlights danced across the mountainous terrain. My friend Eric’s voice echoed off the ridge above us through the night air. He called to his lost dog, Lady, but there was no response. It was late, and we were deep in the wilderness of western Virginia.

Lady had been hot on the trail of a raccoon. We chased her howls and moans through the bottoms, trying to keep up. Eventually her sounds faded into the distance. The search for this lost hound seemed futile, but it’s hard for a man to leave his dog behind. Eric and I made it to the top of a craggy ridge, gasping for breath, muscles aching.

I looked down at my bloody, dirty arms. “I think we should go home,”

I told him. “Lady will show up and someone will call you.”

For a moment he deliberated, then agreed. He surveyed our surroundings with his flashlight. A look of concern came over his face.

We trudged on through the muddy briar-covered bottoms and over steep rocky ridges. Fifteen minutes passed, then thirty, then an hour. My throat was parched and my limbs ached. Each time Eric spoke, the panic in his voice increased. It was near midnight. I could only imagine the verbal thrashing my parents would give me when I showed up several hours late. And then it hit me-I might not make it home. The two of us stopped to rest. In the distance we could hear Lady’s faint cry. We jumped to our feet and set off toward the sound. The sound grew nearer and nearer, and then a glimmer of light appeared in the dark. The light belonged to the old Carico bridge, a looming, rusted steel bridge spanning the New River about 10 miles from nowhere. Again the dog howled, her voice echoing in the distance past the bridge. I couldn’t believe it. In one chase we had covered six miles.

“At least we know where we are now,” I said to Eric. Just as I thought about the change in fortune and the chance to go home, the first drop of cold rain hit my arm.

[pagebreak] We looked onward and saw one of the worst sights I had ever seen: the top of the cliffs at the bridge, several hundred feet high. It was our only way down.

Eric led the slide down the muddy embankment. It wasn’t too bad until we reached the rock portion of the cliffs. It was there that the rain picked up. The sheer rock faces became as slick as sheets of ice as we precariously made our way in and out of the rock. We paused for a moment, hanging on to a mountain laurel bush to keep us from falling down the side of the cliff.

Lady’s deep bellowing moan broke though the night rain, not too far to the right of us. Eric immediately insisted that he had to go after her. I was so incredibly exhausted by this point that I didn’t protest, but I did insist that we keep within earshot. He agreed and made his way, slipping and sliding across the rock face. Every so often we would yell at each other. After about 10 minutes of him searching, I shoted to make sure he was okay. He responded, but the next sound I heard was not his voice, but the violent scream of thunder breaking through the serenity of the late winter rain. After a moment I yelled for him again and he did not respond. I tried over and over, but to no avail. Finally I screamed, “Eric!” at the top of my lungs, my voice overshadowing the pouring rain. When no responses followed, my first true tinges of fear began to shoot through my body. [pagebreak]

As the rain poured down heavier and heavier and the lightning boomed around us, my fear grew greater and greater. After about 10 minutes, which seemed like 10 hours, with no response from Eric, I was in a downright panic. I didn’t know what to do. Should I go to the bottom? Should I look for him? Thoughts of tragic newspaper headlines whirled through my head. All of a sudden I heard his scream echo off of the cliffside. After a few minutes he appeared: battered, bruised and with no dog. “Let’s go home,” he said.

Once again, we began making our way down the cliffs. All of a sudden he lost his footing and tumbled a good 10 feet. I could hear him cursing in pain as I made my way to him. As I grew nearer, I, too, lost my footing and went flying into a wet rock ledge just below him A pointed rock had cut my forearm deeply. We both made it to a sliding position and continued on down. Eric was just ahead of me as we closed in on the riverbank at the bottom. I looked back up through the rain at the monster of a cliff we had seemingly overcome when I heard the clang of a flashlight against wet stone and a scream of pain. Eric had just fallen down a 12-foot rock ledge.

I peered over the bank at my friend, lying in the mud with a look of desperation in his face that I had never seen before. The pale moonlight reflected off a trickle of blood that ran down his forehead.

“My ribs, I think I broke one of my ribs,” he said. I rubbed my face in anguish. He slowly stood up and we managed to finish making our way down to the riverbank. I was truly worried about my friend, but glad to be on level ground. We made our way down the riverbank to the bridge. We climbed the guardrail and stepped onto the blacktop. I looked at my watch, which was now cracked and covered in dirt. It was almost two o’clock in the morning. We started walking through the rain in the middle of the barren, lonesome road.

After a while my cell phone finally got service. Eric called home and his dad left to come and get us. We sat there in the dirt on the side of an old country road, tired, soaked to the bone and hurting. Finally the lights of Eric’s father’s truck appeared in the distance. He pulled over and got out. He could only shake his head as we told him the story. Then he said perhaps the sweetest words I’ve ever heard: “Get in the damn truck.”