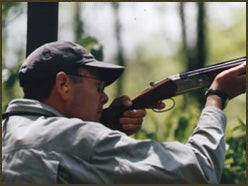 Colorado
Senate: Senator Wayne Allard (R), a member of the CSC, is facing a stiff challenge from Democrat Tom Strickland in a rematch of a 1996 race. The NRA has backed Allard with a campaign donation. Setting up an environmentalist versus conservationist battle, Strickland has received a campaign donation from the not-so-sportsmen-friendly Sierra Club.

Congressional District 7: In a newly created district in Denver’s sprawling suburbs, Republican candidate Bob Beauprez says, “All law-abiding citizens have the right to own and carry firearms.” His Democratic opponent, Mike Freely, has opted not to take a position.

Georgia
**Senate: **Representative Saxby Chambliss (R), former co-chair of the CSC and the author of a bill to ensure sportsmen’s access to public land, is in a close race with his Democratic challenger Senator Max Cleland (D). Cleland is for gun control, is not a member of the CSC and has received funds from environmental groups.

Indiana
Congressional District 8:Representative John Hostettler (R), a member of the CSC, tried to smash President Clinton’s deal with Smith & Wesson a few years ago, a deal that nearly ruined S&W.; Democratic candidate Bryan Hartke is not thought to be pro-gun.

Iowa
**Senate: **Senator Tom Harkin (D) has opted not to join the CSC, has received campaign donations from environmental organizations and has not backed a bill to stop lawsuits against gun manufacturers. Because these views would fit better in some liberal district back East, Republicans are hoping Representative Greg Ganske (R) will oust him.

Maine
Senate: Senator Susan Collins (R), who has received a campaign contribution from the NRA and is a member of the Congressional Sportsmen’s Caucus (CSC), is in a close race with her Democratic challenger, Chellie Pingree. Known as an ardent environmentalist, Pingree doesn’t list a position on the gun issue on her Web site–not a good sign.

Minnesota Senate: At press time, polls indicated that Republican challenger Norm Coleman had a slight lead over Senator Paul Wellstone (D). Wellstone is a gun-control advocate. The NRA has backed Coleman, who recently opposed getting St. Paul involved in a lawsuit against gunmakers.

Missouri
Senate: At press time, Democratic Senator Jean Carnahan was leading her pro-gun Republican challenger Jim Talent in a close race. Carnahan has received campaign funds from Handgun Control Inc. and is not a member of the CSC.

New Jersey
**Senate: **The Senate Ethics Committee slapped Senator Robert Torricelli on the wrist for allegedly accepting gifts in return for favors. On Sept. 30 he dropped out of the election and Democrat Frank Lautenberg, who is a former New Jersey senator, is running in his place. The Republican challenger is Doug Forrester.

Congressional District 5: Scott Garrett, a pro-gun-rights Republican who has received contributions from the NRA and Gun Owners of America, is dueling with Ann Sumers, a pro-gun-control Democrat.

North Carolina
**Congressional District 8: **Representative Robin Hayes (R) is in a tough fight for reelection. Hayes is a member of the CSC and has received campaign funds from the NRA. Hayes backed a trade bill that hurt his state’s textile industry, which is making him vulnerable.

Pennsylvania
Governor: Ed Rendell, the Democratic Party’s godfather of municipal lawsuits against the firearms industry, is sparring with Attorney General Mike Fisher, a pro-gun Republican. Rendell would create a “Green Shopping List” and set up a tax to pay for a $1 billion fund for green causes.

South Carolina
Senate: Representative Lindsey Graham (R) is in a close race with Alex Sanders (D). (Repuublican Strom Thurmond is retiring after 48 years in the Senate.) Graham is a member of the CSC and is pro-gun-rights. Sanders is not thought to be anti-gun but has received funds from the not-so-sportsmen-friendly Sierra Club.

Virginia
Congressional District 8: Bear baiting is seen as a weak point in hunting rights. Representative Jim Moran (D) tried to capitalize on this with an amendment, supported by the Humane Society of the United States, that would have made it illegal to bait bears on federal lands. There is hope that his Republican challenger, Scott Tate, will pull an upset, because recently Moran has been caught in so many financial scandals that even the liberal Washington Post stated, “Mr. Moran does not deserve the job.”

West Virginia
Congressional District 2: In her first reelection bid, Republican Shelley Moore Capito is shooting it out with Democrat Jim Humphries. In this overwhelmingly Democratic (but conservative) district, Democrats have promised to do whatever it takes to win back this seat. Capito has received funds from the NRA but is not a member of the CSC.