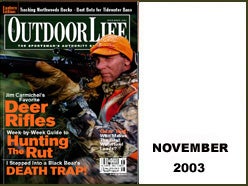 Ultimate Camo
On a recent hunting trip I spotted a tree that looked interesting. I thought that if I put my gun and hat on it, I would actually be able to see a hunter aiming.

So that’s what I did. Thought your readers might appreciate seeing my snapshot of it. I nicknamed it “The Woodsman.”

**Hunter Harassment **
I read with great interest the article on hunter harassment in the November installment of “Snap Shots.”

Several years ago my boyfriend and a friend were bowhunting when they began hearing shots coming in their direction. Shortly thereafter, a car came into view below their position. The driver was cruising along slowly while steadily shooting a handgun out the window into the air. Most of us know the dangers of shooting blindly into the air, as those bullets have to land somewhere. While I doubt that this individual gave a hoot about whether or not he hurt a legitimate hunter, I wonder how he would have felt if one of those stray bullets had killed or wounded Bambi?

**Mad Muzzleloader **
I just wanted to say that the field test you conducted on modern muzzleloaders ] was right on target. My only regret is that I didn’t read your article before purchasing my gun.

I am going to trade this gun in on one of the other in-lines that rated better in your article. Thank you for such accurate reporting in your magazine.

A Howling Good Article
Hurray for Jim Zumbo’s courage in writing “A Howling in the West” in the December/January issue. I only hope the radical, wolf-loving, anti-hunters don’t do him any bodily harm.

I also carried a borrowed .25/35 WCF at about the same age Jim did. I didn’t bag a deer with this rifle, but it sure made me feel like a real hunter. I also shot a nice buck with a .257 Roberts that belonged to my brother-in-law. His two boys and I filled many licenses with that rifle. I even hunted one year with a 6.5 that was borrowed from another brother-in-law.

I still own a .30/30 Marlin lever- action that helped me bag my best buck ever, but my favorite rifle is my Model 700 Remington in .270-a rifle that I have hunted deer and elk with for more than 30 years.

_Correction: On page 92 of the November issue, Flambeau’s Full Limit decoy was inadvertently misnumbered. The Flambeau decoy was the teal decoy at the bottom (center) of the grouping. We apologize for any confusion this might have caused. _