One of the best survival tools you have is your brain. Here's how to use it. 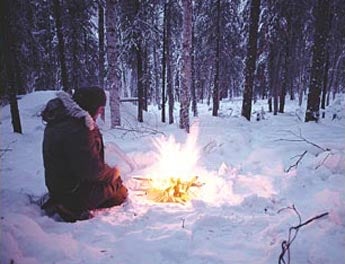 Remember the 1997 film The Edge, the one in which a big grizzly spends a couple of days chasing Anthony Hopkins and Alec Baldwin around Alaska? If you do, you’ll recall that Anthony Hopkins’s character, a wealthy man named Charles Morse, does everything he can to instill calm and confidence in his two comrades after they survive a bush-plane crash into a lake. Of course, when the bear shows up, Morse’s survival plans boil down to battling the griz. But his catch phrase, “What one man can do, another can do,” works to focus his desparing, hyperventilating friends.

The truth is that, in a survival situation, whether you live or die depends to a great extent on what’s between your ears, not just what’s in your pack. Faced with threatening circumstances, people sometimes panic and either do the wrong thing or do nothing at all. And that’s when you might be the one who has to take charge.

Your own degree of calm will influence others, and steadfastness only comes with experience and learning, though a good survival course doesn’t hurt. If you’re steady, others in your party will feel more calm and confident about the prospects of survival. But if fear-generated breakdowns are looming among members of your group, here are some ways to help.

Taking care of priorities helps maintain focus and a positive outlook. I’ll discuss prioritizing in next month’s column, but the immediate tasks are attending to serious injuries, building a shelter and setting up signaling devices.

People react to intense adversity in many different ways. You may have to handle a wide variety of personalities. They include:

After all that, what do you do if someone breaks a leg or a storm blows in? Or a bear shows up? Calmly tackle the most pressing problem first, then move on to the next most pressing; organization and precise execution are key. Do the most good for the most people, tempering your response with realism. Remember, people survive broken legs all the time, so accentuate the positive despite the pain. If weather moves in, continue to improve the shelter-getting wet is bad.