There are dozens of edible plants in nature. Can you identify them? 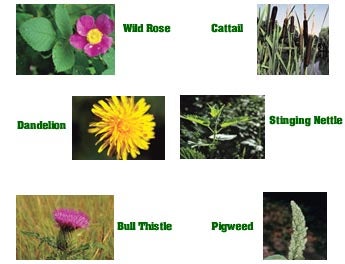 Knowing how to identify and use wild edible plants is a very valuable skill to possess. If a survival situation goes long-term, food gathering and preparation will be critically important. Over time, insufficient caloric and nutritional intake will deplete physical, mental and emotional strength, leaving the victim unable to take care of basic needs.

Supplementing the diet with every available resource can help stave off these effects. There are several hundred thousand plant varieties in the world, but only a fraction of them are edible. I don’t subscribe to “edibility tests”-sampling a small amount of something and waiting to see what happens. But you can use wild plants safely if you know how to identify them. Here are a few widely available plants that are safe to eat.

In the wild, rose flowers tend to be small, but the leaves and thorns are otherwise similar to those of domesticated varieties. The edible part is the “hip,” the globe left behind after the flower has fallen. As the hip ripens, the outer layer (a pithy covering over the seeds) becomes a tasty and nutritious treat. Related to apples, rose hips sometimes have a hint of flavor that is similar to that of the well-known fruit.

Dandelion
Plus: Eat the dandelion early in the season, since it becomes bitter with age.

Everybody recognizes this lawn pest, but it also grows in the wild. In fact, dandelions are one of the most versatile edible plants. All parts of the dandelion can be used for food: root, leaf, bud and flower. I like the young flower buds before they blossom. They remind me of Brussels sprouts. The leaves can be used raw for salad or cooked for greens. The flowers can be eaten raw or cooked.

Bull Thistle
Plus: A biennial, the bull thistle will only grow a flower in its second year.

A native of Europe, the bull thistle can now be found growing along roadsides all across the U.S., as well as in deserts, pastures and forests. It’s easy to identify because of its very rough appearance, pain-inducing spines and purple flower head. The edible part is the young stalk. Scrape away the outer skin and spines, then eat the inner core as you would celery. Late in the season the stalks become too woody to eat.

Cattail
Plus: You can use the cattail’s flowers as a flour supplement for your pancakes.

Found in moist ground near lakes, streams and swamps, cattails are easy to recognize. Both the roots and the young shoots are edible. I particularly like the young shoots before the familiar brown seed head emerges. These can be pulled from the center at the base of the leaf cluster, peeled and eaten. Later, when the seed head emerges (it will still be covered by flowers) you can prepare it like a skinny ear of corn.

Stinging Nettle
Plus: Dry and crush leaves to steep for a tea.

The nettle is easy to identify-just brush the back of your hand against it. Tiny hollow hairs act as hypodermic needles to inject irritating formic acid. Given its appearance, most folks are surprised that the stinging nettle is edible. Steam or boil the young tender tops, but only briefly so the greens don’t turn to mush. Nettles can also be eaten raw. I pluck the tops while hiking and pop them in my mouth. A bit prickly, but entirely edible.

Pigweed
Plus: Pigweed seeds are now grown commercially and prized as a cereal grain.

Pigweed can be found in every corner of the country, and farmers and gardeners generally consider it a pest. The tender tops and young leaves are edible as potherb greens after 15 minutes of cooking to soften the rough leaves. The flavor is bland, so they make a nice complement to more flavorful greens such as dandelions and other more wildly flavored edibles. Inn survival situations pigweed can be eaten raw.