Sportsmen are at high risk of being struck by lightning. Here's how to stay safe. 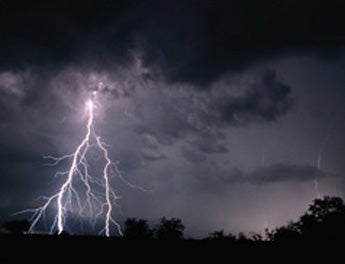 According to National Weather Service statistics, about 400 people in the United States are struck by lightning each year and an average of 73 of them die, or nearly one out of five. That’s more than the annual number of deaths caused by hurricanes, tornadoes or blizzards; only floods rank higher than lightning strikes when it comes to deadly weather.

What to Do
The only chance to save a victim who has suffered lightning-induced cardiopulmonary arrest is to administer effective CPR and follow it with emergency medical treatment. In spite of best efforts, some victims will remain in a coma and eventually die of secondary causes such as hemorrhages and multiple lesions on the brain, spinal cord, lungs, liver or intestines.

Those who don’t die from lethal cardiovascular or neurological damage typically suffer debilitating injuries. Among the most common are severe burns, burst eardrums, blindness, paralysis, memory loss, sleep disorders, weakness, dizziness, numbness, petit mal seizures and chronic pain. Sometimes victims recover, sometimes they don’t. Sometimes they live the rest of their lives with disabilities or extreme storm phobia and post-traumatic stress disorder. There’s nothing warm and fuzzy about Mother Nature when she throws this kind of fit.

Eye on the Weather
Hunters and fishermen are particularly at risk, because we spend so much time outdoors and tend to “tough it out” when the weather suddenly turns rotten. Because of predominant weather patterns, certain parts of the country are especially prone to lightning. The Southeast, with its warm and humid air, experiences more strikes than any other place in the United States; Florida ranks number one. But there is plenty of risk elsewhere. Colorado ranks 24th in overall lightning strikes but is 10th when it comes to casualties. This disproportionately high incidence of injury can be explained by the popularity of outdoor activities in Colorado. With so many hikers, hunters and fishermen wandering around outside, there’s a higher likelihood that somebody will be hit.

Tips to Keep in Mind
So what can you do to be safe? The National Lightning Safety Institute offers these tips: run for cover If you hear thunder, lightning is within six to eight miles of you-well within the danger zone. You should look for shelter immediately. Safe refuges include:

Hair Raising If you feel your hair standing on end or hear crackling noises, you’re in danger. Immediately get rid of metal objects, place your feet together, duck your head, and crouch low with your hands on your knees.

Too Close As a storm approaches, thunder will lag behind the flash of lightning by five seconds for each mile of distance. For example, if you see lightning and the sound of thunder reaches you 10 seconds later, the strike was two miles away. Lightning can jump six to eight miles from one strike to the next, so you are in danger and need to take precautionary action.

Out of the blue After lightning and thunder have departed, wait at least 30 minutes before resuming activities. Don’t be fooled by sunshine or blue sky. A bolt can travel from a storm cell as far as 10 miles away and hit you.

The grim reality is that lightning is a capricious event that cannott be predicted with any degree of reliability. There is nothing you can do to prevent a strike. All you can do is remember the precautions that offer your best chance for safety.