These tips will let rescuers find you in a hurry. 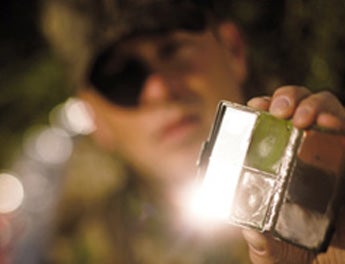 As the early morning fog burned away, I scrambled aboard a search-and-rescue helicopter on a mission to locate some overdue hunters. With nothing to go on except a vague idea of their destination, we flew all day through canyons, across ridges and peaks and over dense forest. We followed every trail they might have driven in their bobtail 4×4. We strained our eyes looking for clues but saw nothing. Then, as the sun was about to set, we saw it-the orange glow of sunset, reflecting off the windshield of their vehicle. We had found them, but we could have done so much more quickly if they had been actively signaling us.

Using Light and Sound
Every outdoorsman should know the techniques of signaling and should carry the equipment to get the job done. There are two types of signals: visible and audible. Visible signals can take the form of reflected or direct light, smoke, motion or a contrasting pattern laid out on the landscape. Audible signals are those a rescue party might hear: three shots fired in succession, three long blasts on a whistle or horn or even a shouted call for help. Using a combination of every available visible signal you can think of will help rescuers find you much more quickly in a survival situation.

In the field, you should always carry your survival kit [BRACKET “see “Save Your Butt,” April 2002″], complete with a signal mirror and a police whistle for sending audible distress signals. (In a survival situation, it’s far better to use a whistle, since it carries much farther than your voice and it uses far less energy than shouting.)

If you have to improvise, your vehicle offers many possibilities. If you have a CD player, you’re in luck: A compact disc makes an excellent visual signaling device. If not, remove a sideview mirror (or another shiny part) from your vehicle. Use a polished canteen cup, tin plate, belt buckle, space blanket or anything that is reflective. Aim the flash at every passing airplane. (Be reasonable-commercial flights at 30,000 feet will not see you.)

To aim, hold up two fingers at arm’s length and shine the light toward its destination, allowing the beam to play through your fingers as a sight. If the plane turns toward you, keep flashing but don’t blind the pilot by focusing your beam on the cockpit.

If no planes are around, flash distant ridges, valleys, peaks or other places people might be camping, hiking or driving. Someone might see the flash and investigate or call for help.

Signaling with Fire
At night, keep a signal fire going. Three fires arranged in a line or in a triangle is a universal distress signal. It’s best if the signal fire is positioned in a clearing, so it can be seen from a distance. In an emergency, torch a small tree or bush, but don’t start the forest or grasslands on fire. Lanterns and flashlights can be useful, but they have limited fuel or battery power. Use them only when you are sure searchers are nearby. Signal flares might be effective, if the searchers are close, but flares are short-lived and pose a fire hazard with a flight path that cannot be controlled. They could drop into a bad spot that is ripe for burning and set the forest ablaze.

Send Up Smoke
During daylight hours, smoke from your signal fire can be visible for miles. If you have oil or rubber available, burn it to produce black smoke. (Note: Deflate spare tire before burning.) Green or wet foliage fed carefully into a fire will produce white smoke.

Make a Motion
Motion will catch the eye of searchers, but don’t wear yourself out if nobody is around. When searchers are near, wave a colorful shirt. As a continual motion signal, tie large pieces of colored cloth to the top of a limber pole and let them flap in the breeze.

Show a Sign
In a clearing, lay out a pattern of colored or contrasting items (clothing, sleepping bags, backpacks, rocks, tree boughs, logs) on the ground. Make the “sign” as large as possible, and create as much contrast as you can. SOS works, but you can simply make a large V, which is a recognized distress signal. If medical assistance is needed, make a large X.